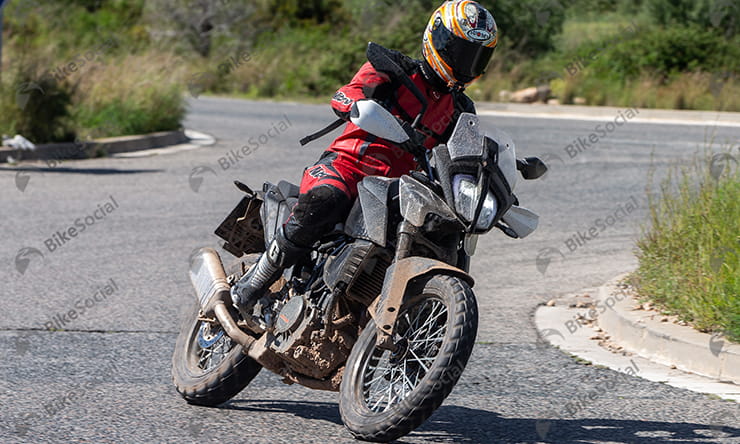 Just last week we heard that KTM’s Indian partners Bajaj had confirmed that 390 Adventure is set for release in 2019. Now our snapper has caught a near-production version of the bike on test as the last details are finalised.

It’s not the first time we’ve seen KTM testing something along these lines – a very early prototype was spotted back in 2016 – but the final version is almost unrecognisable compared to that mule.

The older testbed appeared to be a proof-of-concept machine, with an unfamiliar handmade frame and swingarm and even a prototype engine, plus over-simplified bodywork and a nosecone and screen borrowed from the firm’s Dakar race bike. But 18 months on from then, the 390 Adventure has become a production-ready model with its own unique look, but sharing a vast number of components with the 390 Duke in an effort to keep costs to a minimum.

The engine, frame and swingarm on the latest 390 Adventure prototype all appear to be borrowed directly from the 390 Duke. The main chassis is a tubular steel trellis, appearing to share the Duke’s design, and the swingarm is KTM’s trademark externally-reinforced unit. The engine – clearly in road-legal form here, with a catalytic converter in the downpipe and a large collector box under the swingarm pivot – is also the stock 373cc, 43hp single.

However, the styling, wheels and suspension are very different to the road-oriented 390 Duke. After all, this is a KTM, so it’s not going to be messing about with a mere nod to off-road ability like some other adventure bikes.

The wheels are wire, as you’d expect on an off-roader, and it looks like KTM is using a 19in front and 17in rear rather than the 21in/18in combo it has on its larger 1090 and 1290 Adventure models. As usual, the firm is using WP suspension – it’s a KTM subsidiary – but the geometry is quite different to that of the 390 Duke despite similarities in the upside-down forks and adjustable rear shock. Notably, the front spindle is mounted ahead of the forks’ centreline, increasing the offset when compared to the 390 Duke. Shifting the spindle forwards decreases trail, but since the Adventure’s larger front wheel will have the opposite effect – increasing the trail – the overall result might not be as significant as it appears.

The forks are also longer, which – along with the increased offset – will have the effect of giving the Adventure a notably increased wheelbase compared to the Duke’s 1357mm.

At the back, there’s more travel and height than the road-oriented Duke, as you’d expect, presumably gained via a longer rear shock.

The other big change over the 390 Dukee is the styling, which gets an off-road slant as you’d expect from an adventure bike.

Up front there’s the latest take on KTM’s weird vertically-split headlight arrangement, with the usual DRLs running around the perimeter of the lamps and a somewhat Roman-nosed plastic element separating them. Unlike the vast majority of adventure bikes, the KTM doesn’t adopt the ‘beak’ but instead has a conventional front mudguard near the wheel.

More unusual is the screen, or rather, the screens. As well as a small Perspex windscreen, which appears to be manually-adjustable for height, there are two wing-like deflectors on the sides, also made of the same clear material. Presumably that’s to give a the bike a slimmer appearance but perhaps also to let the rider glance down and get a better view of the front wheel’s trajectory when tacking really low-speed, rough roads.

At the back the bodywork is pretty conventional, but it’s worth noting that there are brackets for quick-release luggage on the sides; expect to see these things fitted with big aluminium boxes much of the time.

From the rider’s perspective, a simple, rectangular LCD display makes up the instrument panel; probably the same unit that’s already used on the 390 Duke.

Electronics are one of KTM’s big selling points, and the 390 Adventure is sure to at least match the 390 Duke on that front. That means you’ll get switchable ABS – of course – with a ‘supermoto mode’ that unlinks the rear brake. KTM’s ‘My Ride’ smartphone tethering system will also be available, adding control for phone calls and music from the bars.

We’re expecting the bike to be officially revealed towards the end of this year, either at October’s Intermot show in Cologne or November’s EICMA event in Milan. However, since the bike will be built at Bajaj’s factory in India, there’s a chance it will be revealed over there first.