Honda gets serious on security with free trackers 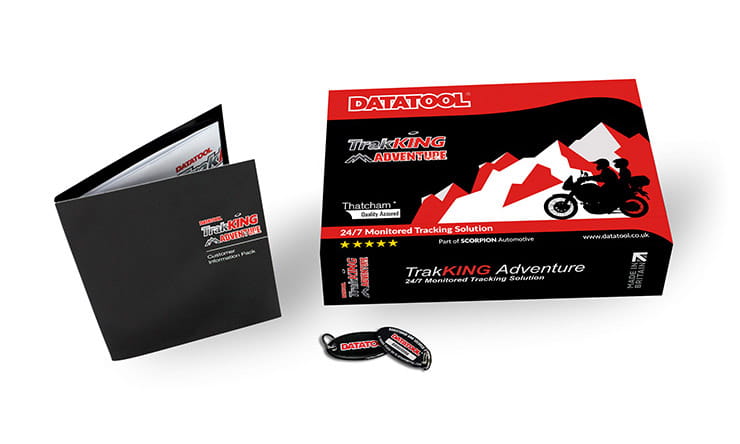 Bike security is always a hot topic and manufacturers are increasingly under-fire for failing to take theft-prevention seriously. So the news that Honda is to offer a Datatool TrakKING Adventure system as a no-cost option on all its new bikes sold in the UK is something of a breakthrough.

Thanks to a partnership with Datatool, Honda is offering the Thatcham-approved tracking system free of charge as a dealer-fitted option to anyone buying a new bike. And existing owners will also be offered discounts on having the same setup retrofitted to their bikes.

Once fitted, the only cost to owners is the annual subscription to the 24/7 tracking service, which costs either £109 per year or £9.95 per month (working out at about £10 more annually). On top of that you can buy extras including RealSafe, an additional £3 per month, which can detect a crash and automatically notify the emergency services when it does.

The system itself would normally set you back £229 plus fitting – there’s no self-installation option available – which could easily add another £100 to that total. So Honda’s deal is equivalent to something north of £300 in your pocket.

We tested the TrakKING Adventure system in May, so you can read all the details of how it works and our thoughts by clicking here.

In short, though, it operates via an app on your phone, which communicates with hardware on the bike that includes accelerometers as well as GPS. That means it can send you an alert text as soon as your bike is knocked or moved. And if it is stolen, the GPS keeps a constant track of its position, updating every few seconds. In 2015, 130 bikes fitted with the system were stolen, and of them 116 were recovered, normally within hours.

Even if your bike is never stolen, the system offers a cloud-based system that stores details of every journey, and display your route in the app. It works throughout Western Europe.

Neil Fletcher, Head of Motorcycles at Honda UK, said: “This ground-breaking safety and security initiative is a long-term Honda commitment to ensuring peace of mind for riders of Honda’s on-road range.

“Fitting a tracking device such as TrakKING Adventure is a significant deterrent, looked on favourably by insurance companies and can lead to around 90% of bikes being returned to their owner if they are unfortunate enough to be stolen. For riders, dealers and insurers, it’s a win-win scenario, speeding up the process of getting back on the road and ensuring customers retain their Honda motorcycle.”

Dave Plummer, Datatool Brand Manager at Scorpion Automotive, added: “Tracking technology is increasingly important for riders looking to protect their motorcycle or scooter, particularly within urban areas. It’s an incredibly positive step from Honda UK to commit to providing our TrakKING Adventure hardware to its customers free-of-charge. We’re keen to work together to develop the product to meet the needs of Honda riders throughout the UK.”

Honda’s decision to offer the system will help it gain a better rating in the newly-launched MCIA Secured system. It aims to give every new model of bike a rating of up to five stars depending on how much anti-theft equipment is fitted.  One star is given for each of the following: a steering lock, an immobiliser, an alarm, a tracker and finally a MASTER Security System.

MCIA CEO Tony Campbell said: “Following the announcement of the MCIA Secured scheme due to be rolled out over the coming months, it is great news to see Honda take this important step in fighting Motorcycle & Scooter Theft which has become a growing problem in recent years. The MCIA Secured programme has been introduced to make it clear to customers which anti-theft security is fitted as standard to New Motorcycles and Scooters and at the same time encourage manufacturers to invest more in security for the customer. The MCIA and Industry has been working tirelessly hard with Government and Authority to tackle the problem of Theft and therefore we are extremely pleased to see Honda introduce TrakKING as a standard fit security item on all new Honda’s.”