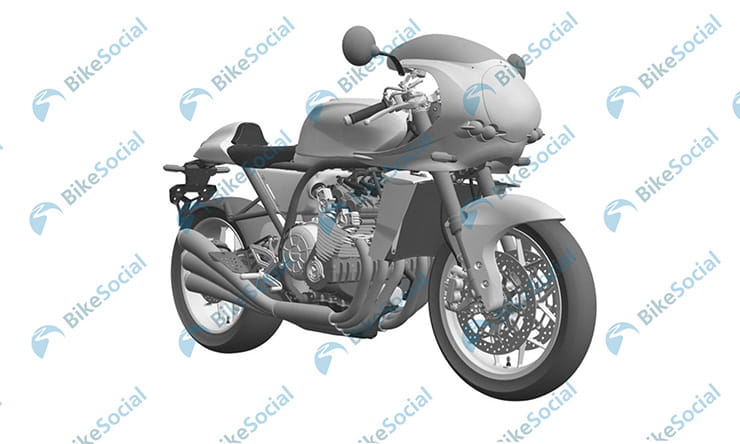 Honda is preparing to unleash a new six-cylinder retro sportsbike and we’ve got pictures long before you’re supposed to be seeing it.

The design patent images might be black-and-white, but they show almost every detail of the new machine, which Honda will presumably reveal later this year. And while our instant reaction was “this must be a concept bike” there are several details that indicate it’s actually a planned production model. If that’s the case, it shows a return to form for Honda when it comes to ground-breaking, class-defying engine design. 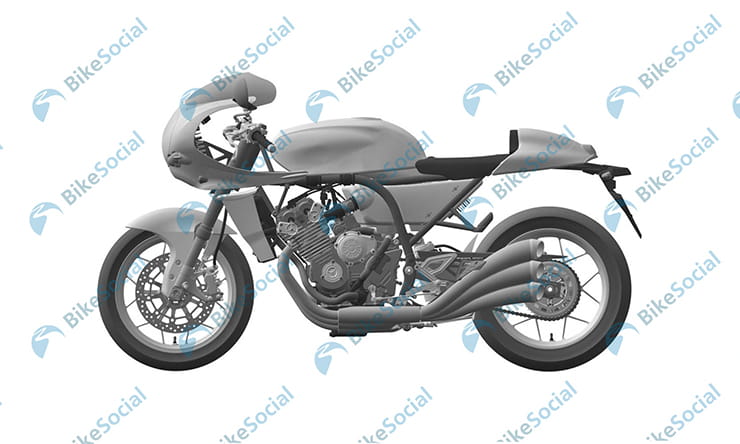 While we’ve got pictures of the new bike from every angle, there’s no official information to go with them. That means we’re left guessing when it comes to things like engine capacity and performance.

Purely from its external dimensions, the engine appears to be in the region of 1000cc, and with six cylinders instead of the normal four it should be well positioned to rev higher than its rivals. More revs means more power. It’s the same thinking that Honda applied back in the 1960s with its legendary six-cylinder GP machines and again 40 years ago when it first unveiled the CBX; the world’s fastest production bike at its launch in 1978.

This machine clearly isn’t aimed at that title – the neo-retro styling, reminiscent of last year’s Interceptor concept bike, isn’t made with aerodynamics as its main goal – but it should still be far more powerful than rival machines in its retro category.

While the prominent cooling fins are a clear nod to the original CBX’s air-cooled motor, the large radiator dispels any notion that this engine is anything other than water-cooled. That’s good news when it comes to performance; while Honda’s existing CB1100 proves that air-cooled inline engines can still be made to meet emissions rules, it’s not exactly a high-performance offering.

Another clue that this is a high-revving, high-power motor comes in the form of the unusual-looking devices mounted near the ends of the camshafts. It’s likely that these are actuators for some sort of variable valve timing or lift system, perhaps working by shifting the fulcrum of the cam-followers.

If it truly is a 1000cc engine, designed for performance, then it’s not a huge leap to suggest that it could be capable of something in the region of 200hp. The massively wide rear tyre certainly suggests this is a serious performance machine.

Drive goes through what appears to be a fairly conventional stacked transmission that’s notably lacking any of Honda’s DCT dual-clutch, semi-auto shenanigans; there’s a mechanical gear linkage twixt left foot and transmission, and a normal clutch lever for your left hand. 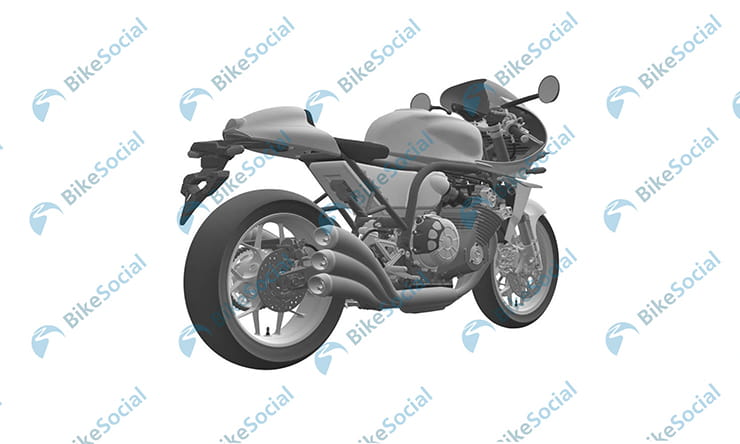 Although the idea of a neo-retro, six-cylinder bike screams ‘concept’ rather than ‘production’ the clues that this is a serious showroom project keep stacking up.

The engine, for instance, breathes through a bulky airbox under the seat – surely if it was a concept the temptation would have been to stick six pancake air filters on there instead? And there’s an electronics module – perhaps to do with the ABS or the engine management – slung out behind it. More notable still are details like the licence plate hanger, complete with a legal-requirement reflector above the plate, a numberplate light and indicators. Similarly there are indicators at the front – again these are often missing on styling concepts – and conventional mirrors mounted on the fairing.

Look more closely and it’s clear that there are ABS speed sensors on both the front and rear wheels, and the six exhaust headers merge into collector boxes – presumably containing catalytic converters – before they split back into six tail pipes. That’s a lot of work in ticking legal-requirement boxes if this bike is purely intended to draw gawping punters onto a show stand.

Yet more evidence of production intent comes in the form of the pillion seat – hidden under the cafe racer seat hump – and pillion pegs. 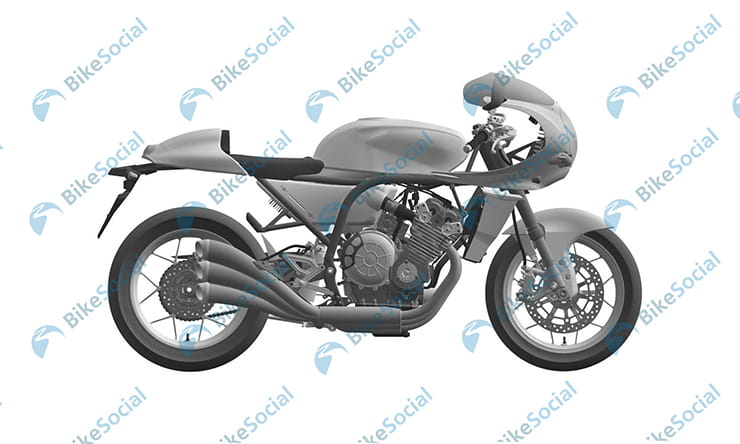 The styling is clearly in the same vein as the CB1000R (and its 300cc and 125cc siblings) launched last year, as well as the CB1000R-based Interceptor concept. However, the new six-cylinder is rather more devoted to the ‘retro’ element of its neo-retro looks.

The separate fuel tank, for instance, sits atop the tubular steel frame rather like that of a 1960s race bike. In fact, the frame design is very similar to that of the RC166 250cc six.

Not that this is a pure retro bike, though. The upside-down forks and radial brakes are resolutely modern, as are the four LED headlights and the MotoGP-style winglets on top of the radiator.

The same applies to the instruments, which are hard to pick out in these images but combine a single analogue rev counter with LCD displays either side. It’s a combination of old and new that works well.

Why would Honda make a bike like this? Well, it’s no doubt seen that there’s a growing market for expensive, exotic bikes with stand-out mechanical features, epitomised by the likes of Kawasaki’s supercharged H2. Hopefully this isn’t quite in the same league as the unattainable RC213V-S, but it’s quite easy to imagine Honda offering it as a low-volume, high-priced range-topper along the lines of the supercharged Kawasaki. Indeed, Kawasaki itself has hinted, with the SC-01 Spirit Charger sketches that it might be offering a retro, cafe-racer-style H2 in the future. If Honda also has a six-cylinder machine with a similar price and performance, wealthy customers could have a hard decision to make.

As expected, Honda's response was to neither confirm nor deny. A spokesperson said, “As a matter of policy, we do not comment on speculation”.