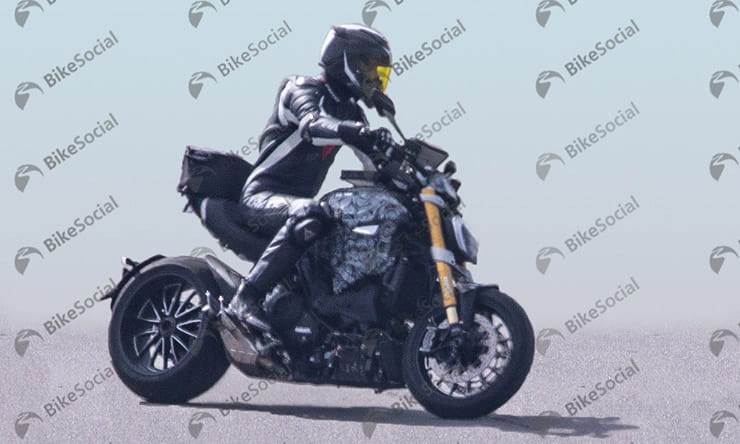 Ducati’s Diavel was a revelation on its launch as part of the firm’s 2011 range. It defied traditional categories by combining elements of cruiser, muscle bike and drag bike. It was a country mile lighter, faster and better-handling than any of its rivals, with a superbike-derived Testastretta engine and sporty geometry.

A mild revamp came for 2015, four years after the Diavel’s launch, and the moment is fast approaching when Ducati will give the bike a much bigger overhaul.

The picture you see here is the first glimpse of the next-generation Diavel, although its rough state suggests there’s still a lot of development work to do. While a new Diavel in 2019 makes sense, following the four-year update schedule of the original, the state of the prototype makes us think it might be 2020 before the replacement is ready for production.

Rough though it is, there’s still plenty to be seen on this prototype. Most clearly of all, it shares a lot of components with the XDiavel, which was launched in the 2016 Ducati range as a lower, longer machine with a more traditional feet-forward cruiser-style riding position.

Despite their similar styling, the original Diavel and XDiavel shared virtually no components, with different frames, engines and suspension. But that looks set to change with the next-gen Diavel adopting the V-twin motor and the main frame design of the XDiavel.

Despite rumours among Ducatisti that the next-gen Diavel might have the 1299 Panigale’s Superquadro engine or even the new Panigale V4’s 1103cc four-cylinder, the spy pictures reveal it’s actually going to use the 1262cc Testastretta DVT used in the XDiavel and Multistrada 1260.

It’s pretty clear even in these slightly blurred, long-range spy pictures; the bike is using the current XDiavel’s underslung exhaust, including the stock silencer and catalytic converter, and the engine cases are recognisably shared with the XDiavel.

In on-paper performance terms, the old 1198cc Diavel and the 1262cc XDiavel both make an identical 152hp, with the newer, larger engine needing 9500rpm to hit that maximum compared to just 9000rpm for the older, smaller motor. The torque peak is also almost identical – the old Diavel manages 91lbft, the newer XDiavel 93lbft. But there’s a big difference in the way it’s delivered; the old engine, with less capacity and no variable valve timing, needed 8000rpm to reach peak torque, the newer design hits its maximum at just 5000rpm.

The use of the XDiavel exhaust system on this prototype reveals that the frame – largely hidden by patterned disguise padding in the pictures – is also similar to the XDiavel’s. The original Diavel mounts its rear shock horizontally under the swingarm, but the XDiavel exhaust prohibits that design, which means repositioning the shock into a more conventional, high position.

However, while the main structure of the bike is shared with the XDiavel, there are plenty of Diavel bits on the prototype, too. Most notable is the riding position, with relatively rear-mounted pegs compared to the laid-back posture that the XDiavel forces on you, along with a higher seat and tail than the XDiavel. The wheels are also straight from the existing Diavel.

The forks – from Ohlins, of course – appear to be new, and at the back there’s a new swingarm as well, shared with neither the existing Diavel nor the XDiavel. Like the Diavel, this prototype uses a chain final drive, suiting its sportier positioning compared to the XDiavel, which uses a low-maintenance belt drive that’s more likely to appeal to traditional cruiser buyers.

The question now is how long we’ll have to wait before we see the next-gen Diavel in its final form. We know Ducati is planning to privately give a preview of at least one 2019 model in just over a week’s time at World Ducati Weekend in Misano. It will be in a sealed room with no cameras allowed in an attempt to prevent pictures from leaking. However, this Diavel doesn’t look ready for the limelight yet. At the earliest we’d expect to see the bike at shows late this year, but it could well be over 12 months before the final production bike is ready.