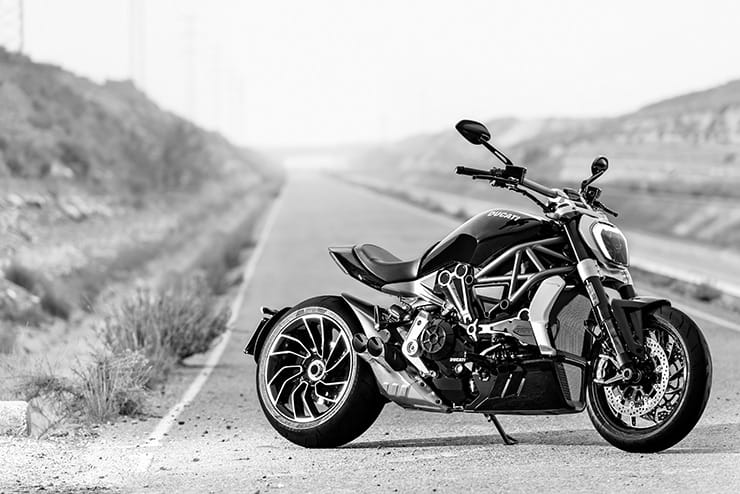 I was going to tell you a story about how me and the XDiavel had a series of amusing ‘acceleration challenges’ last week with one of the local Mercedes salesmen who’d been allowed to take the four-piped, fat-wheeled, pearl white AMG monster home for the night. It was fun, but, in truth, not too much of a contest.

My rules. Crack the throttle, second, third, fourth, throttle back. Look for the dot in the mirrors that just seconds ago was a ton and a half of Stuttgart steel. Slow down for the 30 limit, watch him catch up and repeat. Juvenile, sad, pathetic, but exactly what you buy an XDiavel for?

If one of those preening Premier League footballers with multi-coloured hair or a man-bun walked into a motorcycle dealership, this £20,195 personality extension is what he’d ride out on. Ducati’s XDiavel S is the closest thing to breast implants available to those of us with a Y chromosome.

It looks like a credible version of those funky Honda concepts-made-real; the DN-01 or Vultus. But where Honda fitted a cuddly, commuter twin to their bad boys because they understand that a cruiser is about cruising, Ducati fits a 152bhp, race-developed twin to the XDiavel because it’s a Ducati and Ducatis have to be fast, furious and challenging to ride – it’s all they know. 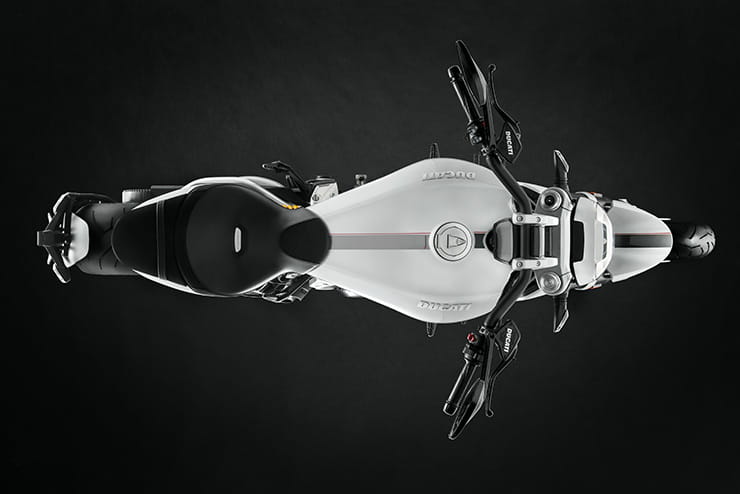 The original 2011 Diavel used the 1198cc L-twin motor from the then-new Multistrada, itself derived from the WSB race bike of the day. It was fast and furious at high revs, but clattery and jerky in town. ‘Half-right-and-occasionally-horrible’ would be a simpler way to describe it.

This latest version uses the 1262cc variable-valve-timing version from the latest Mutlistrada and is much easier to ride at any speed. Having said that, it still prefers fast to slow and is at its happiest with throttle still opening, trying to rip the top layer of tarmac from your favourite road. Peak torque comes at 5000rpm, but the XDiavel makes as much torque at 2000rpm as Yamaha’s original YZF-R1 did at peak, and, if you rode one of those you’ll remember how torquey that was for a sports bike. This cruiser also has three times the power of a Harley Sportster, a better power to weight ratio than a V-Max and, with a riding position that has your testicles further forward than your chin, believe us, you will never ever be disappointed with what happens when you open the throttle. Never.

Just for extra giggles, Ducati have sensibly (?) geared the 152bhp XDiavel for acceleration rather than a purely academic top speed. Compared to a Multistrada, which shares the engine and is no slouch, the XDiavel’s acceleration from 30-90mph is stunning.

That sounds great in a road test, but in reality, the Diavel is hugely compromised much of the time. On a steady throttle, picking your way through traffic, that sharper gearing makes it harder to find the easy drive that an engine like this should provide and it never quite feels comfortable on a steady throttle at any speed or seems to know which gear to be in.

And that’s an issue because the gearchange is imprecise and unpredictable. At least it was on our test bike, which, admittedly only had 200 miles showing when I took it on. The gearchange on BikeSocial’s long term test Multistrada has got considerably better as the miles increase, so let’s give the XDiavel the benefit of the doubt for now.

Usually on a big twin, you can improve the cog-swapping by meticulous chain adjustment, but on the belt-drive Ducati, that’s not really a home-mechanic’s job. What makes the gearchange trickier are the forward -set footpegs on the XDiavel that make it harder to hook your foot under to change up and allow less of a stomp on the way down. The downchanges from sixth to fifth and from second to first were particularly random and when our man-bunned midfielder needs to find neutral, he’d best be hoping for a decent spell of extra time at the lights. 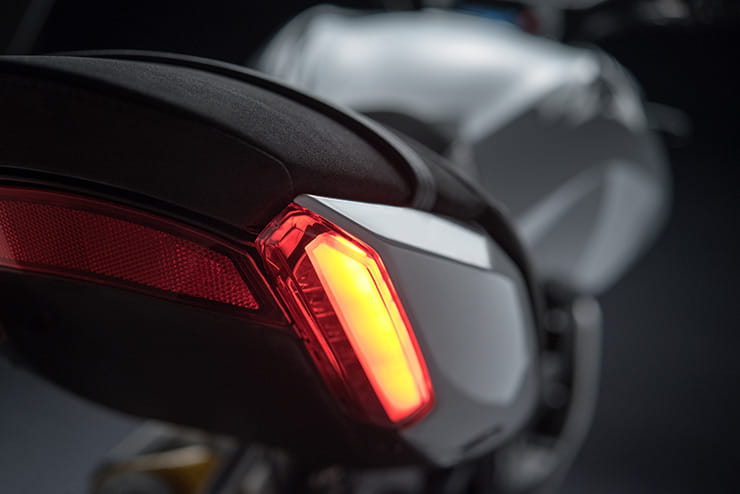 Considering the XDiavel has enough power to have won a TT 20 years ago and a riding position straight out of Easy Rider, it is surprisingly comfortable. Half the time I rode it like a V-Max and was surprised how comfy it was up to the kind of speeds where a Mercedes becomes a speck. The other half I rode it like a Harley, chugging around at 60mph, missing gears in absolute comfort. The low seat is really supportive, handlebars not too wide or too forward, or too far back and the forward footrests are high enough to allow ground clearance in corners, but not so much that the flies going up your trousers get much past your knees.

Ducati claim that using the combinations of standard and aftermarket seats, handlebar positions and footrests there are 147 different ergonomic configurations available. Hopefully, the aftermarket handlebars don’t look as cheap and nasty where the fat bits in the middle become thin bits at the edges to allow Ducati to use their regular switchgear. I’m no engineer or fashion victim either, but I’d be disappointed if I paid £20k for a bike with this attention to detail.

Fuel consumption averaged 44mpg, which was good considering how much dicking about, sorry, ‘unofficial performance testing’ was going on. 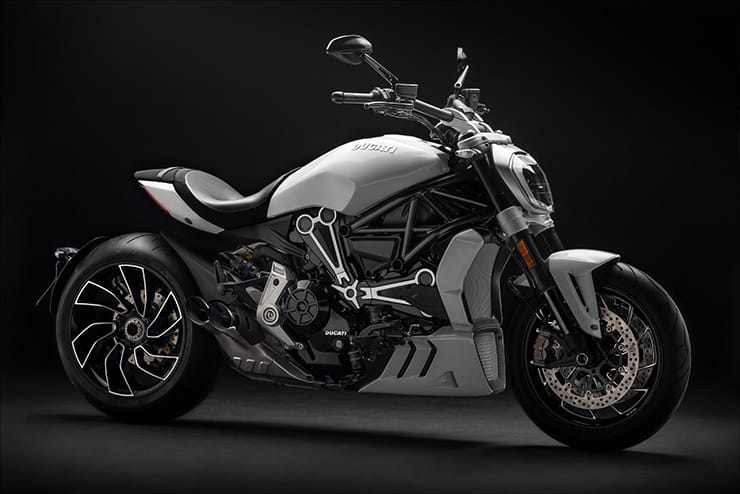 The XDiavel is what happens when a sports bike company builds a cruiser so you’d expect it to hold the road well and be surprisingly good in corners. Needless to say it ticks both boxes, even with that comic-book 240mm rear tyre (twice the width of the front) on an eight-inch rim. It also has 40 degrees of lean angle, which sounds good (I think) but is only the same as Harley Davidson’s Street Rod 750. Thankfully, the Ducati’s suspension is much more controlled than the Harley’s so it retains a lot more usable ground clearance as you brake into corners.

Suspension is adjustable for preload, rebound and compression damping at the front and preload/rebound at the rear. The huge 50mm forks have black-anodised stanchions for extra, er, blackness 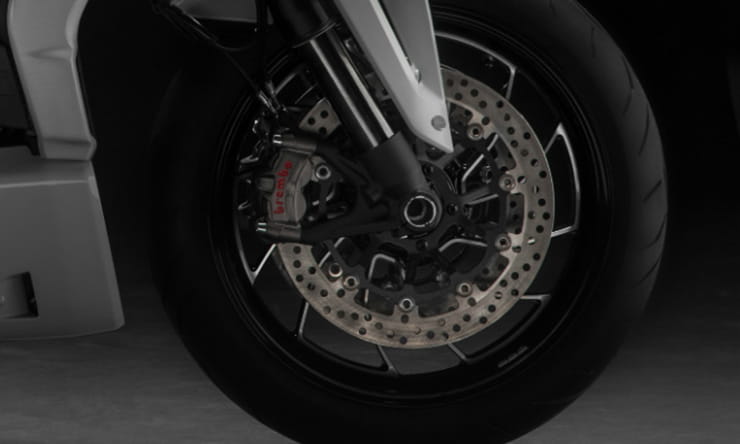 The S model gets Brembo’s M50 calipers, which are superb, as ever. But no one buys an XDiavel for the brakes. They will be interested in the cornering ABS though and the multiple riding modes, launch control and wheelie control. Ok, maybe not the wheelie control. ‘Urban’ mode cuts the power and gives maximum electronic comfort blanketing, ‘Touring’ gives the full 152bhp, but delivered with finesse and moderate electronic interference. ‘Sport’ mode deliver the full blat of power, sharply, but safely with minimal TC, anti-wheelie and stability control in place. 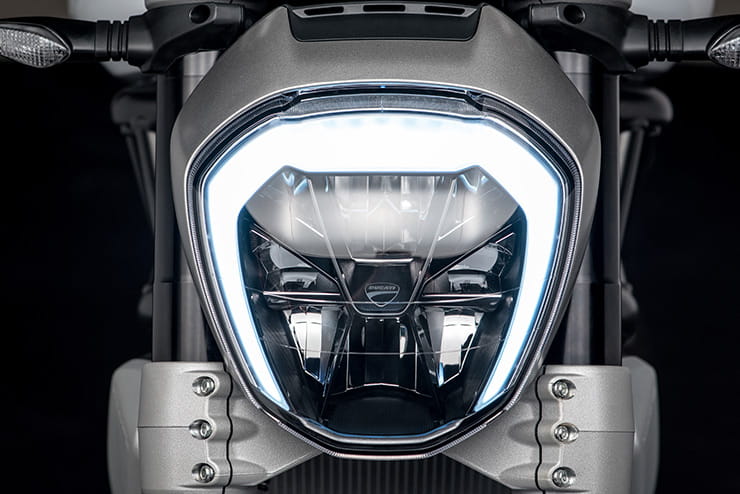 Keyless ignition is semi-useful but would be better if it included the fuel filler cap too. Full LED lighting is very effective and the switchgear is backlit too. There’s no quickshifter or semi-active skyhook suspension, both of which would be surprisingly useful on a bike like this.

A teeny TFT instrument panel is simply laid out and easy to use. The menu system for changing settings and displays is logical and easy to work out and the switchgear is well laid out too.

Ducati’s first ever belt drive should keep transmission lash to a minimum and be virtually maintenance free. 152bhp and 0-60mph in around three seconds is a lot of stress for a drive belt though – it’ll be interesting to see how long they last in the real world. 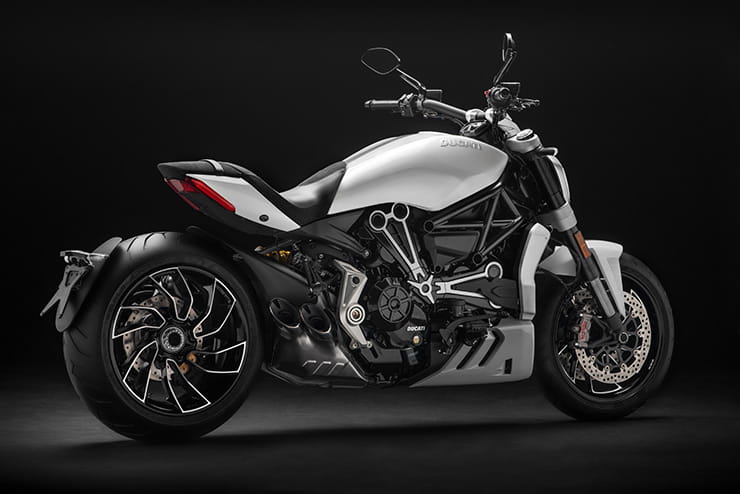 £20,195 for this XDiavel S-model might be loose change for our man-bunned ball-botherer, but it’s serious money for most of us and £3k more than the standard XDiavel. That standard bike is the same sort of money as Yamaha’s recently-retired Vmax used to cost and is similar to the price of a similarly blinged (but much slower) Harley or Indian.

With the VMax gone there’s nothing really to compare the XDiavel to so whether it is good value or not is hard to determine.

Ducati’s TriOptions finance gives plenty of PCP options. With a £2k deposit, you could ride an XDiavel S for £331 per month for 37 months with an £8864 final payment. Whether that’s good value or not depends on whether your team is Premier or Rymans League. Either way, gearbox proviso aside, the XDiavel will definitely get you noticed. 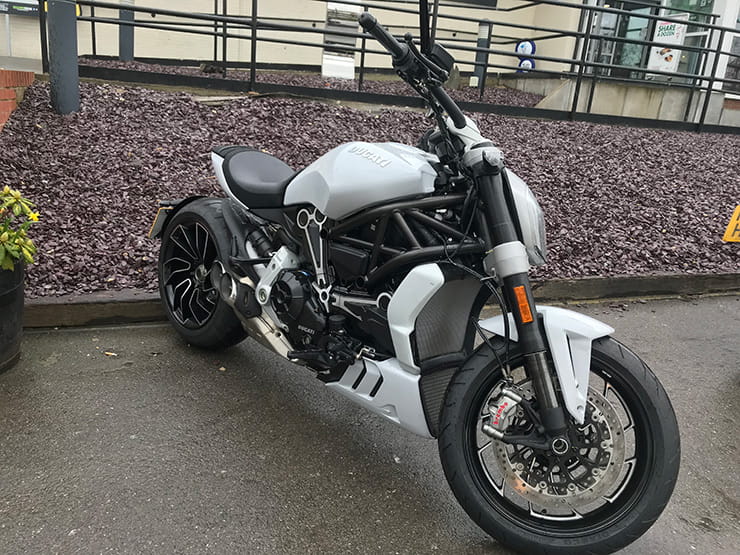 How many bikes have you ridden that once they’ve gone to pastures new, you miss? For me, the XDiavel S is one of them. Feeling like the King of the Oxford Circular, the Ducati’s deep burble and reassuringly testosterone-laden engine note from those bad-ass slash-cut exhausts sure kept pedestrians alert as well as other road–users and the dead. Like a dream date that fizzled out too fast leaving you all miserable, I only spent a few fleeting days with my beloved, mean and muscly cruiser before handing it over to Mr Rose. With just 10 miles on the clock at collection, the Ducati had been mine to deflower. Gleaming and pristine in pearlescent white with those beefy wheels and tyres looking like they’d destroy buildings, the chassis and rather firm suspension takes a little getting used to when you’ve got ‘Ducati’ written on the keyfob and tank.

Belt-drive, feet forward and cruiser are not phrases often associated with Ducati but when those Bologna Boys put their mind to it, man they can create a mighty fine motorcycle, make no mistake. Targeting a new audience by dangling a massive 1262cc-shaped L-Twin carrot is not as easy as it might sound.

Feet forwards and wide arms has never been my preferred choice of riding position, preferring the more contortionist-like sportsbike crouch yet even with all my 90-odd kgs pivoting on my coccyx, the XDiavel S’s plush seat supported me well. For 50-miles anyway. Then adjustments were required every 10 miles thereafter.

That said, there are 60 different positions you can sit when riding the XDiavel S once you throw all the optional accessories in to the mix along with four different footrest positions, four different seats and three different handlebars.

With 153.8bhp waiting for you at 9500rpm yet a peak torque figure of 128.9Nm at just 5000rpm, it’s enough embarrass pretty much everyone and everything away from the lights especially if you engage the ‘Power Launch’ setting… so long as the big throw from first to second gear and beyond is up for the challenge. It’s a mighty fierce wolf in catwalk model sheep clothing. I love its stance; aggressive yet nonchalant.

The pillion seat is a token gesture which will require a brave sole to try it out considering how close their posterior gets to that massive 240-section rear Pirelli.

As The Three Degrees once said, when will I see you again. 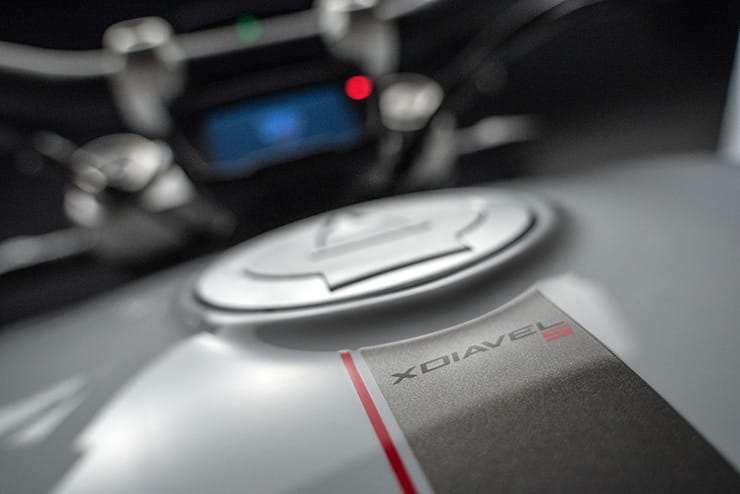 Three things we love about the Ducati XDiavel S… 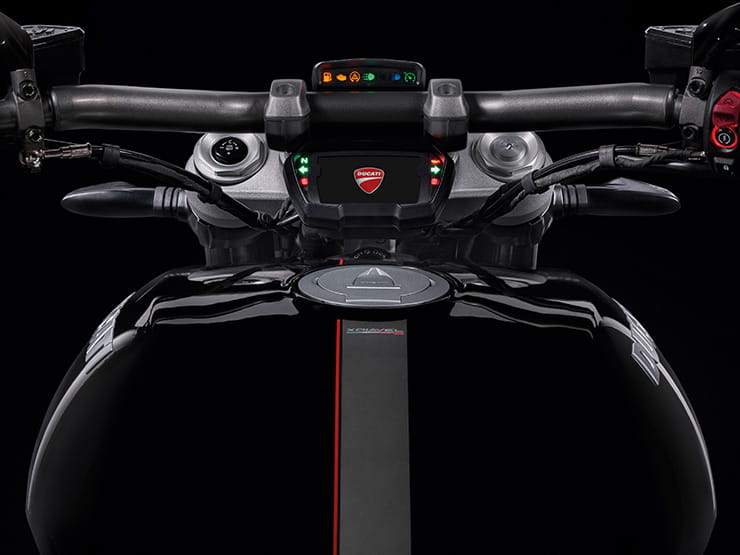