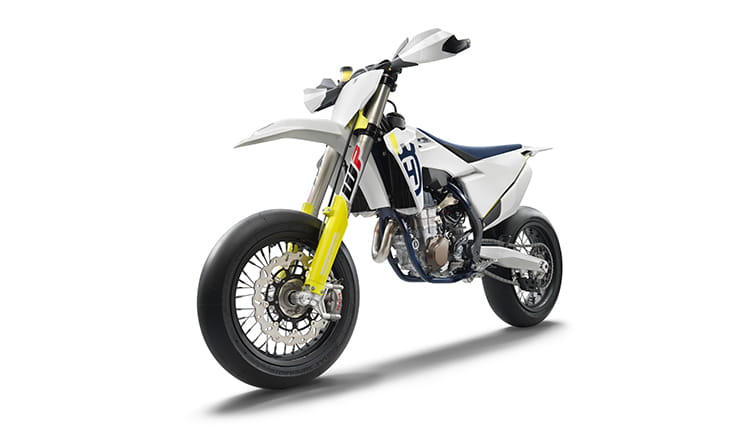 The market for race-only supermotos clearly isn’t a big one but even if you’re not about to rush and buy one there’s inevitably something appealing about such single-minded machines. And the new 2019 Husqvarna FS 450 looks like the stuff of dreams.

Featuring a new chassis, a carbon subframe, new bodywork and a revamped engine with a new cylinder head the 2019 FS 450 is lighter and faster than its predecessor, while retuned suspension means it promises better handling as well.

This is what the firm has to say about it:

A leading developmental force within the supermoto segment, for model year 2019 Husqvarna Motorcycles introduce a wide series of considered upgrades to the FS 450. Standing out is the all-new, blue coated frame with increased rigidity for improved rider feedback and optimum straight-line stability. Unique to Husqvarna Motorcycles, the composite carbon fibre subframe design gets an additional weight reduction of 250 g for 2019.

With a redesigned cylinder head reducing the engine’s weight by a significant 500 g, the trademark single-cylinder SOHC powerplant is more compact than ever. At an overall weight of just 27.3 kg and offering a peak power output of 63 hp, the new FS 450 engine design brings notable improvements in handling and usability. Using top-level supermoto competition as a base for development, the FS 450 is equipped with black 16.5” (front) and 17” (rear) Alpina spoked wheels. The high-quality wheels are matched with Bridgestone 125/80 R420 and 165/65 R420 slick tyres for maximum grip, traction and agility. 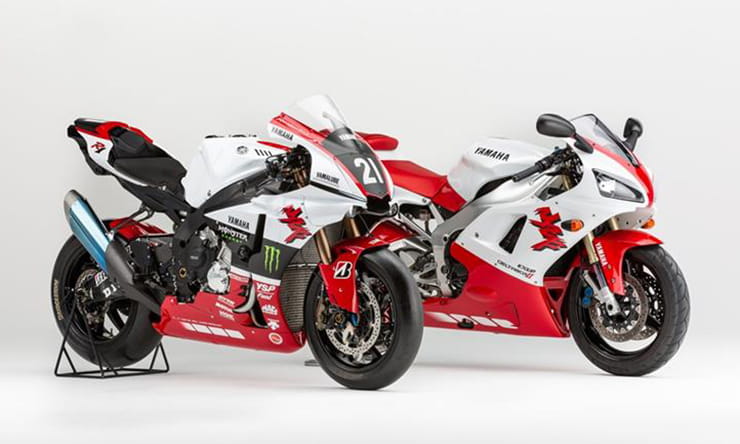 2: Bikes at Goodwood Festival of Speed this weekend

Goodwood’s annual Festival of Speed is underway as you read this and continues until Sunday. And while cars remain its main focus, there’s no shortage of two-wheeled machinery there.

Both Honda and Yamaha have a significant presence, with a selection of road and race machines from the past and present, plus a taster of the future.

The firm’s new 2018 Gold Wings will also be present, working as course bikes throughout the event.

Yamaha, meanwhile, is celebrating the 20th anniversary of the R1 with appearances from riders including Michael van der Mark, Nori Haga, Josh Brookes and Tarran Mackenzie. Bikes running up the hill will include an original 1998 R1, the current WSB race bike, the 2018 Suzuka 8-hour R1 and the 2018 R1M.

Away from the R1, Yamaha will be showing off the leaning three-wheeled Niken and its self-riding MotoBot robot – although sadly the latter will be a static display rather than a demonstration of its abilities.

Yamaha Motor Europe N.V. President Eric de Seynes said: “We are delighted to showcase the past, present, and future of Yamaha Motor Company at the 25th anniversary of the Goodwood Festival of Speed. It is a superb event that brings together motorsport fans across all disciplines. It gives us this year the great opportunity to celebrate the 20th anniversary of our iconic Yamaha YZF-R1 superbike, and present some of our revolutionary machines like the three-wheeled Niken and the pinnacle of race technology, the YZF-R1M. On top of that, MotoBot will give the visitors a real glimpse into the future. And last but not least, we are very happy with the participation of Michael van der Mark, Alex Lowes, Josh Brookes, Tarran Mackenzie and Noriyuki Haga - among other famous riders - who will take on the Goodwood hill climb on a variety of different Yamaha machines!” 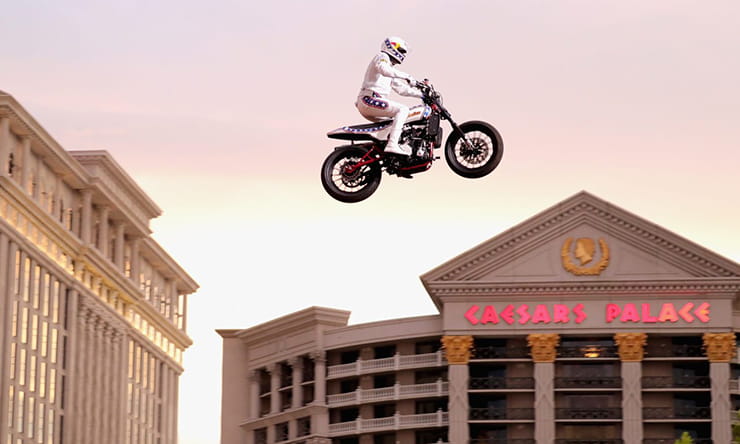 3: Pastrana lands Knievel-tribute jumps and the Nitro Circus is in Vegas to stay

Shown as-it-happened in America on the History channel last Sunday evening, and aired a day later on Monday night for UK viewers, the much-hyped daredevil display included jumps over 52 crushed cars, 14 Greyhound busses and finally over the famous Caesars Palace fountain. It was Knievel’s crash attempting the fountain jump in 1967 that made him a household name around the world.

Pastrana managed to avoid replicating Knievel’s crash, despite using a V-twin Indian FTR750 flat tracker that’s about as close as you can come today to the big twins that Evel used to ride.

Pastrana said: “I’m thrilled to have had this opportunity to honour Evel Knievel, whose guts and showmanship created the foundation for action sports.

“Evel pushed himself and flew further on a motorcycle than anyone thought possible. So with this modern day tribute we wanted to bridge generations – from my parents’ generation who was inspired by Evel to the generation after me who may not know much about the original stunt men who paved the way – HISTORY and Nitro Circus wanted to show just how incredible his accomplishments were. To be able do that in Las Vegas and at Caesars Palace, where Evel’s legend was born, is so awesome.”

Meanwhile, Pastrana’s troupe of daredevils, the Nitro Circus, has revealed that it is to begin a residency at Bally’s Las Vegas Hotel and Casino in spring 2019.

The team announced: The Nitro Circus Vegas residency will feature the core action sports elements of the Nitro Circus touring show, but reimagined in a format unlike anything we’ve done before, with an up-close intimate setup that only a residency can allow. The best athletes in the world in FMX, BMX, skate, scooter, and more will be throwing down constantly in Las Vegas, and the show, conceived and produced by Travis Pastrana himself, is designed to be immersive and unique, so that no two nights will be the same. 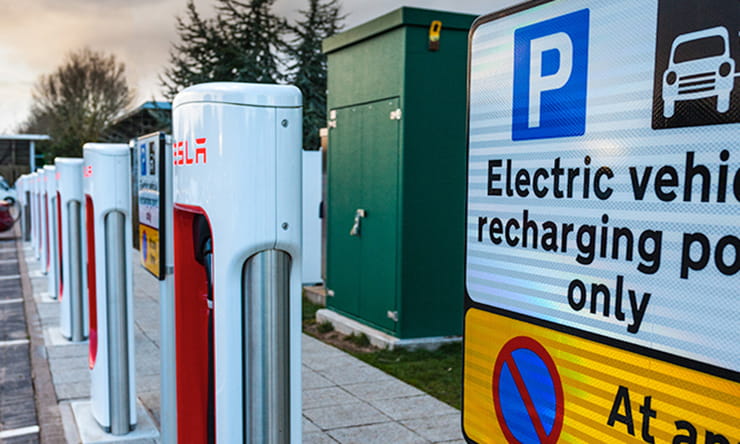 The Government has launched a ‘Road to Zero’ strategy that hopes to see as many as 70% of all new cars to be “ultra low emissions vehicles” emitting less than 50g of CO2 per kilometre by 2030. That basically means electric cars, plug-in hybrids or range-extender electrics. And bikes are part of the plan, too.

Although it recognises that the market for electric, zero-emissions bikes is not as advanced as that for cars, the Government says it’s aiming to boost that number by guaranteeing that the grant of up to £1500 for anyone buying a new plug-in bike from the approved list – now including nine manufacturers and more than 20 models – will continue until at least 2020.

Last year, only around 100 people took up that grant. That’s means they account for just 0.1% of bikes sold at the moment, but the number is sure to balloon as more manufacturers join the fray with ever more convincing electric bikes.

The Road to Zero strategy says: While cars outnumber motorcycles by more than 24 to one on UK roads, motorcycles are a sizeable vehicle population, with almost 1.3 million currently licensed. Since the launch of the plug-in motorcycle grant in 2016, nine manufacturers have had bikes approved to the scheme with more than 20 models currently available at a range of prices and specifications.

As part of the strategy, there will be a massive expansion in the charging network for electric vehicles. Measures will include a requirement for charge points in many newly built homes, plus introducing lampposts with built in chargers for on-street top-ups. There will also be grants of up to £500 for anyone installing charge points in their homes. 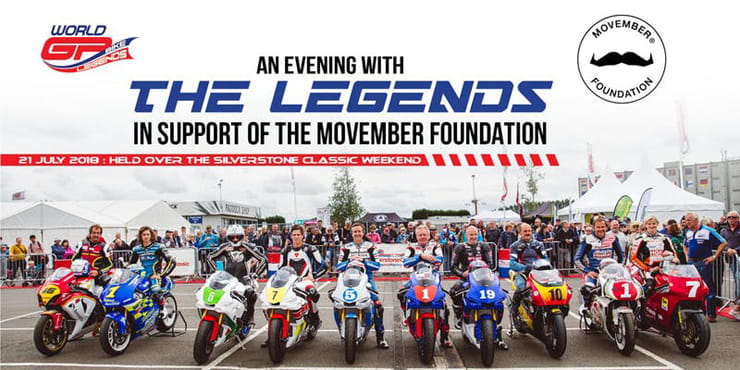 Do you fancy the idea sitting down to dinner with a host of motorcycling royalty that includes multiple GP world champions? Well now’s your chance, as tickets are available for ‘An Evening with The Legends’ in support of the Movember Foundation.

Taking place on Saturday 21 July, the weekend of the Silverstone Classic, the dinner is at nearby Whittlebury Hall. The list of riders at the event is: Wayne Gardner, Freddie Spencer, Phil Read, Christian Sarron, Raymond Roche, Steve Parrish, Didier de Radigues, Maria Costello and Niggi Schmassman.

Tickets cost £95, and for that you’ll get welcome drinks, a three-course dinner with a legendary rider sitting at each table and evening entertainment hosted by Steve Parrish including a chat show and Q&A with all the riders. And of course all the proceeds are to be donated to the Movember Foundation, so it’s for a good cause.

Of course, while you’re there it makes sense to take in the Silverstone Classic, where the same riders will be on track riding a combination of classic 500cc two-stroke racers and modern Yamaha R1s painted in retro liveries.

Tickets to the dinner are, of course, in very limited numbers, so be quick and click here to get your hands on one.