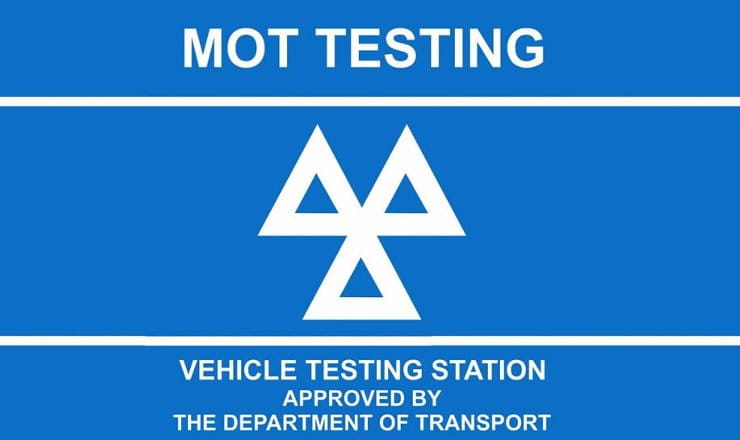 A leading think tank – the Adam Smith Institute – has turned its attentions to the MoT test and concluded that it’s outdated and ineffective at influencing road safety.

Despite the fact that around a third of all vehicles fail their MoT each year at the first attempt, the ASI says that the MoT doesn’t significantly improve road safety and places a financial burden on road users. It points to relatively recent moves in Washinton DC and New Jersey to abolish vehicle inspections, suggesting that there’s been little or no measurable detrimental impact.

The report suggests that the annual MoT could be scrapped entirely, replaced with less frequent testing, or that the age for first tests could be increased from three to five years.

Overall, the Institute says that drivers pay an average of £33.60 for their MoT each year, but that additional repair bills needed to pass average £143, pushing the total cost past £170.

Since only 2 percent of road accidents are attributed to mechanical failure.

In the last 20 years, almost no evidence has been presented documenting the positive impacts of programs such as the MOT; instead, these programs represent a significant amount of wasted time and money performing tests and unnecessary repairs, none of which makes roadways safer. Furthermore, the existence of these programs may lead drivers to engage in neglectful or reckless behaviors, as they know that their cars will be forced into better shape come the end of the year.

Therefore, roadways can be improved by jointly relaxing the burdens placed on drivers and focusing attention on more pressing areas of vehicular safety.

While there remains strong popular support for the MOT test from both policymakers and private citizens, nearly all recent evidence suggests that the test is ineffective at influencing road safety. As vehicle technology improves to make cars safer to drive, government policy should bring itself into the 21st century by striving to make drivers—not vehicles—safer and more reliable. Increased focus on distracted and unsafe driving practices will surely be more effective at reducing fatalities than any vehicular inspection program.

By continuing inspection programs like the MOT, the United Kingdom places an overly burdensome weight on its drivers to care for their vehicles while overlooking the more serious drivers of roadway fatalities and injuries: the drivers themselves.

Even if the program cannot be abolished completely, the MOT program ought to – at a minimum – be seriously overhauled to be less restrictive and wasteful, and to focus on driver behaviour rather than vehicle status.

We say: Given that MoT statistics show bikes are far more likely to pass on the first try than any other sort of vehicle, it’s safe to say motorcyclists are more aware of vehicle maintenance than the average road user. And even then, the negative response to the recent move exempting vehicles over 40 years old from MoTs suggests most of us would still like to see regular testing.

While we’re in the EU, it’s a moot point – Council Directive 96/96/EC mandates periodic vehicle safety inspections for most vehicles. But after Brexit our government will be free to follow the advice of this report, if it so desires. 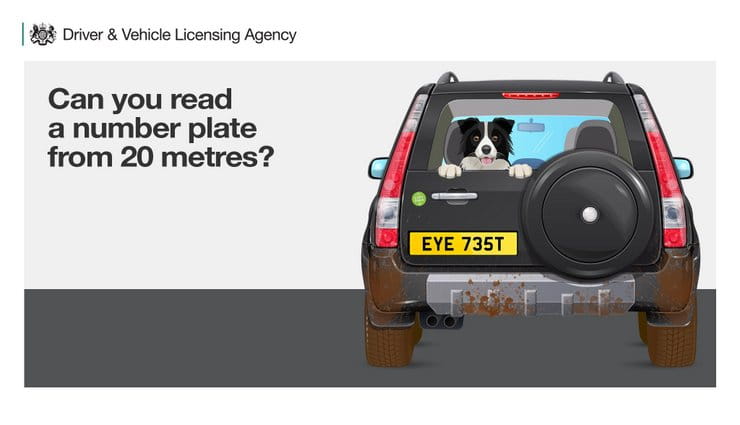 Sticking to the theme of road safety, the DVLA has discovered that only half the drivers taking part in a recent survey knew the minimum eyesight standards and is urging everyone to self-test their vision to ensure it meets the required acuteness.

In a campaign running throughout the summer, the DVLA will be reminding people to check that they can read a number plate from a distance of 20 meters. That’s what everyone is asked to do in their driving or riding test, but many won’t have tried again since tearing up their L-plates.

“The number plate test is a simple and effective way for people to check their eyesight meets the required standards for driving. The easiest and quickest way to do this is to work out what 20 metres looks like at the roadside - this is typically about the length of 5 cars parked next to each other - and then test yourself on whether you can clearly read the number plate. It’s an easy check to perform any time of day at the roadside and takes just a couple of seconds.

“Having good eyesight is essential for safe driving, so it’s really important for drivers to have regular eye tests. Eyesight can naturally deteriorate over time so anyone concerned about their eyesight should visit their optician - don’t wait for your next check-up.”

We say: short-sighted drivers might be a stereotype of the risks faced by motorcyclists, but that doesn’t make the danger they pose any less real. 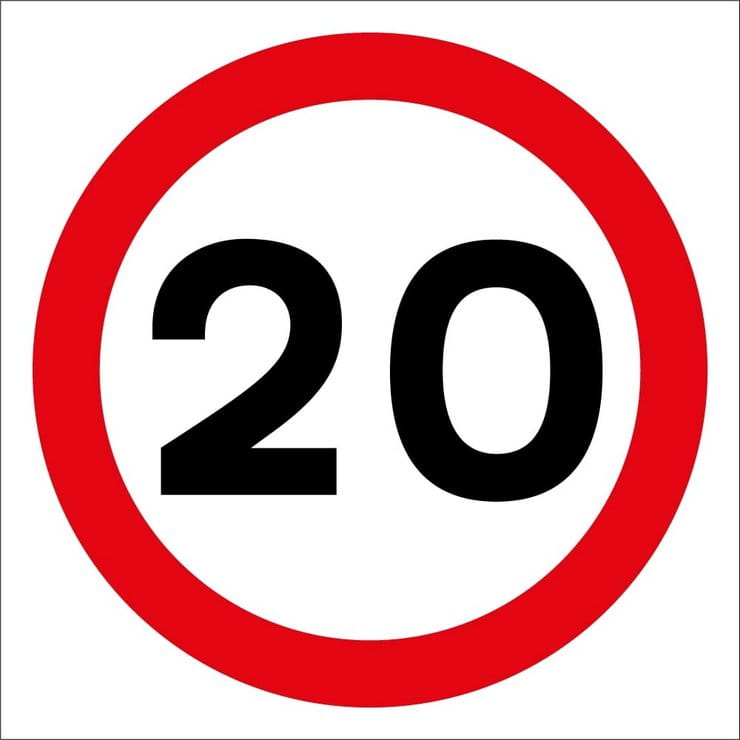 London Mayor Sadiq Khan has published the city’s ‘Vision Zero’ action plan which intends to eliminate deaths and serious injuries on London’s transport network. And a key proposal is to make 20mph the general speed limit on all TfL roads within the congestion charging zone by 2020.

The plan also intends to introduce 20mph limits in many other parts of London, aiming to introduce the lower limit on 150km of roads in TfL’s network.

At the moment, there are around 2000 deaths and serious injuries on London’s streets each year, and the initial target is to reduce this figure by 65% by 2022. By 2030, the plan envisages nobody being killed on or by a bus, and by 2041 the roads are intended to be completely safe, with zero deaths.

As well as the new speed limits, there will be changes to the layout of particularly dangerous junctions and new safety standard for HGVs. Initially, 73 junctions have been pinpointed for safety improvements.

On the motorcycle front, Vision Zero’s plans include additional safety training for riders of bikes and mopeds. At the moment, pedestrians, cyclists and motorcyclists make up 80% of all the deaths and serious injuries on London’s roads.

Sadiq Khan said: “I don’t accept that deaths and serious injuries on London’s roads are something we just have to put up with. Every single death or serious injury results in heartache and tragedy for those affected, and their loved ones.

“Our bold and far-reaching plans being announced today are some of most ambitious in the world, and start from the basis that no death or serious injury on London’s roads should be treated as acceptable or inevitable. At the heart of our plans is reducing the dangers of speeding vehicles across London, which is why we’re proposing a new general speed limit of 20mph on TfL roads within the Congestion Charging Zone - protecting cyclists, pedestrians and all road users in the busiest part of the capital.

“The design of vehicles on London’s road is also crucial. That’s why we’re using the latest safety technologies to transform London’s buses and bringing in a world-leading safety standard for lorries, alongside investing record amounts in building new infrastructure to make walking and cycling a safe option in every part of the capital.” 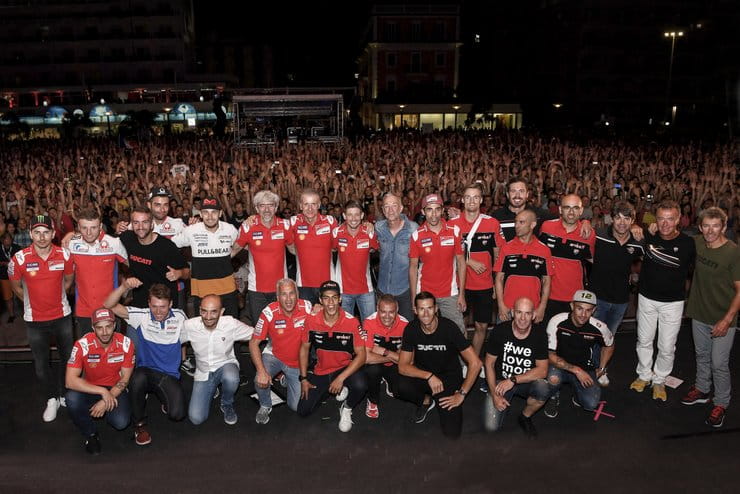 4: World Ducati Week is biggest ever

Over the three days of this year’s World Ducati Week at Misano, some 91,596 fans of the Bologna firm showed up – making the 10th edition of the event the most successful ever.

Highlights at the event included the race between 12 of Ducati’s best riders, all on stock Panigale V4 S machines, with 13 bikes prepared for the event now raising huge sums on eBay (there’s one extra because injured Chas Davies, who was supposed to take part, was replaced with Xavier Simeon, with another bike prepared specially for him.)

At the time of writing, Simeon’s bike was the cheapest on Ducati’s eBay listing, at €28,650, while the machine ridden by legend Troy Bayliss – who actually finished last in a rain-shortened race – is the most expensive at over €120,000. The race itself was won by Michele Pirro, followed by Tito Rabat, Xavier Fores, Jack Miller and Marco Melandri. Works GP riders Andrea Dovizioso and Jorge Lorenzo finished 7th and 10th respectively.

Ducati also gave a preview of a still-secret new model, allowing fans to see it in a secure, closed room with a strict ban on cameras. It’s a trick Ducati has used more than once before, but this year the security appears to have worked, with no photos of the machine emerging after the event. In case you’re wondering, we understand the bike in question was the upcoming new Diavel 1260 spied on test earlier this month. 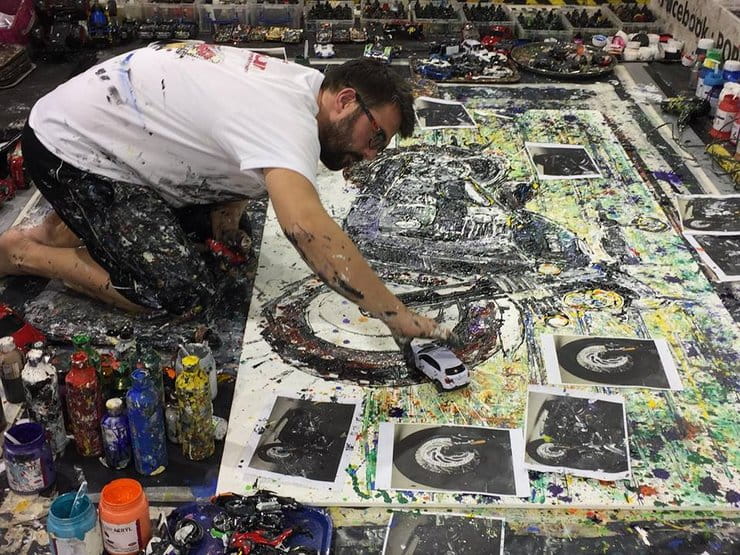 5: Win a work of art with Triumph

We’re used to seeing prize draws and promotions at this time of year as bike firms make a push for summertime sales but Triumph’s latest is a bit of a departure. The prize isn’t the usual branded kit or even a free bike, instead it’s a unique work of ark.

The painting in question is a piece by British artist Ian Cook, the man behind PopBangColour, who uses radio-controlled cars, toy cars and real tyres instead of paint brushes to create his pictures.

Anyone buying a Triumph before 30th September will be entered into the draw to win it, with the winner being presented with the picture at Motorcycle Live at the NEC in November.

Ian Cook said: “I’ve been fortunate enough to work on a lot of great projects in my career but this is the first time I’ve had the opportunity to celebrate the anniversary of such an iconic motorcycle through my work – I’m really pleased with the final piece.”

Paul Lilly, General Manager, Triumph Motorcycles UK & Ireland, added: “Ian creates some really amazing and bespoke pieces of art. We’re very happy with how the painting has turned out and look forward to handing it over to its new lucky owner later this year at the NEC.”