2017 Bike Sales: Looking Behind the Numbers 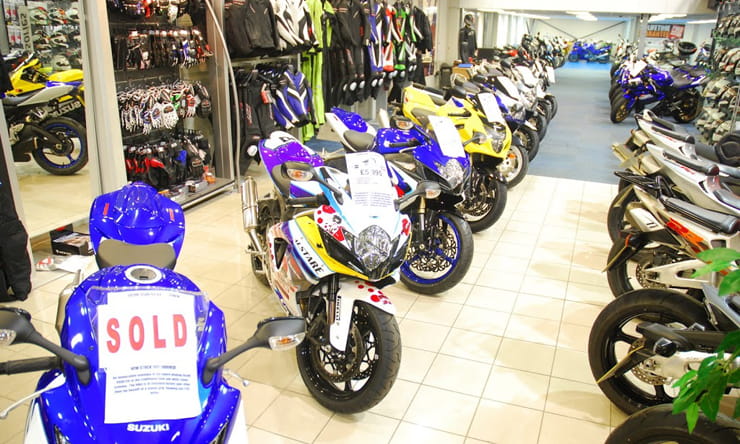 Each month of 2017 appeared to bring more bad news for motorcycle sales with consistent double-digit percentage drops compared to the previous year. But are things really that bad? We’ve taken a deeper look at the numbers to see what the trends really are. 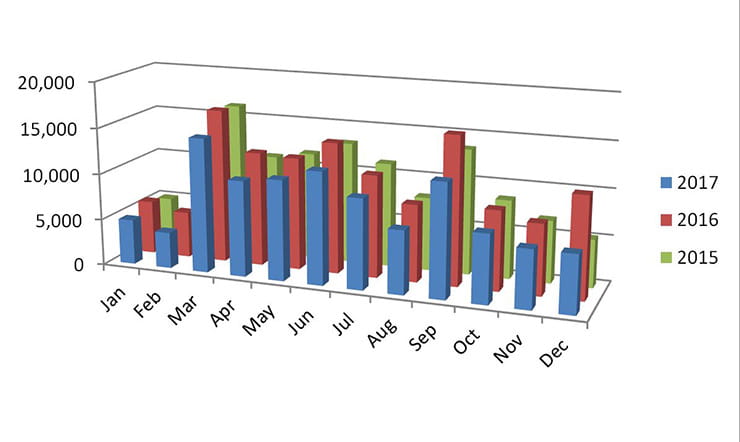 Total sales down – but that shouldn’t be a surprise

The graph above shows the month-by-month registration figures in the UK, showing how 2017’s performance (blue) compared to 2016 (red). And yes, you can clearly see that every month there was a dip compared to the same point in the previous year.

But we’ve also added 2015’s sales into the graph (green) and those numbers are far closer to the 2017 figures. In fact, if you compare 2015 directly to 2017, while you still see a drop in sales, it’s by a relatively tiny amount.

So is the problem that 2017’s sales were particularly terrible, or did 2016 have an unusually high numbers of new bikes registered?

It’s a bit of both, and the weaker Pound after the Brexit vote, which pushes prices of imported bikes up, is sure to have had an effect. But the graphs also show that something else is going on.

A huge clue comes from simply looking at the very end of 2016’s registration figures. While 2015 and 2017’s graphs show a perfectly understandable decline as winter draws in – gradually sliding down from September’s new-registration-driven peak – in 2016, December’s sales were more than double those of December 2015. In that light, the 43% drop that they experienced in December 2017 doesn’t seem so terrible; it’s a reversion to the norm rather than a horrifying cliff-fall.

What changed at the end of 2016 to drive so many new registrations in December of that year?

The answer, of course, is the introduction of the new European type approval legislation, which came into force on 1st January 2017. From that moment, in theory at least, it became illegal to sell a new bike that didn’t comply with rules including mandatory ABS brakes on everything over 125cc and, of course, the stringent Euro4 emissions legislation.

In reality, many older designs have since been awarded a stay of execution until the end of 2018, but each needed to be applied for individually. And as we showed a year ago (here and here), plenty of machines were dropped from manufacturer’s ranges rather than having their legality extended.

So in December 2016, there was a clear-out. Bikes falling foul of the new rules were either being sold at unmissable prices, or being pre-registered at dealers to dodge any complications from being left as unregistered new stock that didn’t align with the latest Euro regulations.

In fact the European type-approval rules – widely simply referred to as ‘Euro4’ even though that’s merely the emissions limiting element of them – were a hot topic all through 2016, giving canny buyers a powerful lever to get cracking deals on new bikes. That means that while there’s a particularly noticeable spike in December registrations, for much of 2016 there were bargains on offer, artificially boosting sales.

Alternatively, riders who had been planning to make Spring 2017 purchases could have been persuaded to splash out in late 2016 instead. Either way, it means that 2016’s gain is 2017’s loss.

The positive side of all this is that it suggests there isn’t a dramatic and sustained drop in overall motorcycle sales.

Finally, the boosted sales in December 2016 contrast particularly harshly with the December 2017 figures because we saw the first increase in the interest base rate in a decade introduced in November 2017. That means anyone taking out a loan or PCP deal in December 2017 is likely to have had a less attractive range of options to choose from. 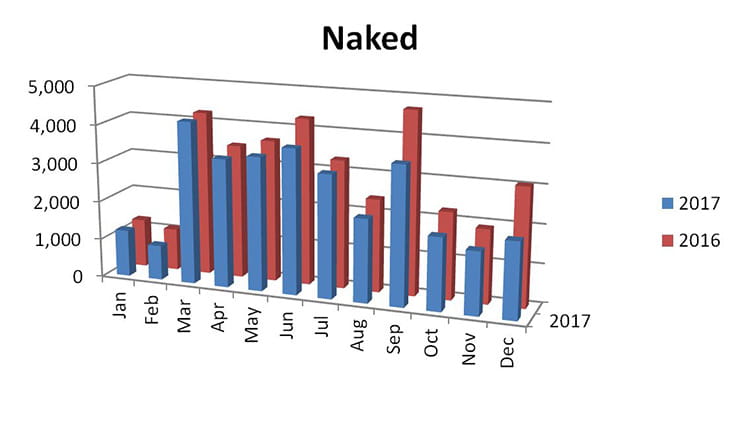 Let’s have a look at each category of bike to see how they’ve faired, starting with the best-selling group; naked bikes.

Looking at the graph it’s clear that while there’s been a drop compared to 2016, it’s not too dramatic. Just as on the overall charts, the biggest discrepancy between 2016 and 2017 comes in the December figures, but since naked bikes are strong sellers the effect isn’t as pronounced as on some other models. That’s probably because dealers have a quicker turnover of this class of bike, so there’s less leftover stock to shift or pre-register, and manufacturers have been on the ball in  getting their naked machines up to muster with Euro4 rules.

For most of the year, Honda’s CB125 was the class best-seller, with honourable mentions to the Triumph Street Triple, KTM Duke 390 and BMW S1000R. 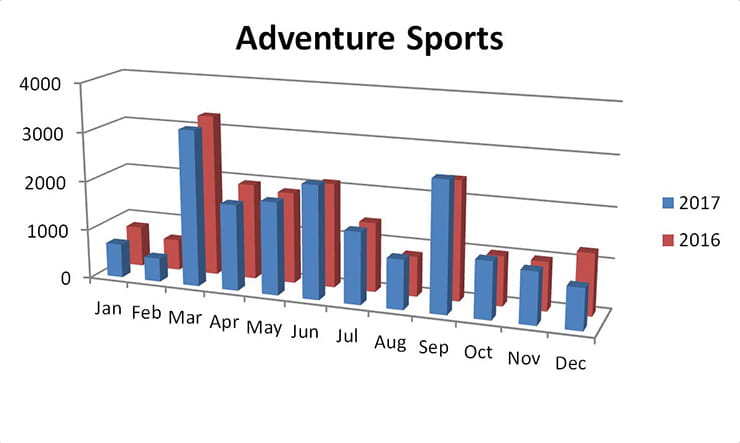 Adventure bikes seem to have been largely immune to dropping sales, and in fact 2017’s figures show an increase in several months of the year compared to 2016. That’s pretty much unique to the adventure bike class.
The December discrepancy is again relatively minor. As with naked bikes, quick turnover and up-to-date stock means that there wouldn’t have been much need to pre-register or heavily discount non-Euro4-compliant bikes at the end of 2016.

The best-seller in the class was usually BMW’s R1200GS, but it didn’t have the whitewash of some previous years. Honda’s Africa Twin and NC750X each topped the charts for at least one month, as did Yamaha’s Tracer 900. 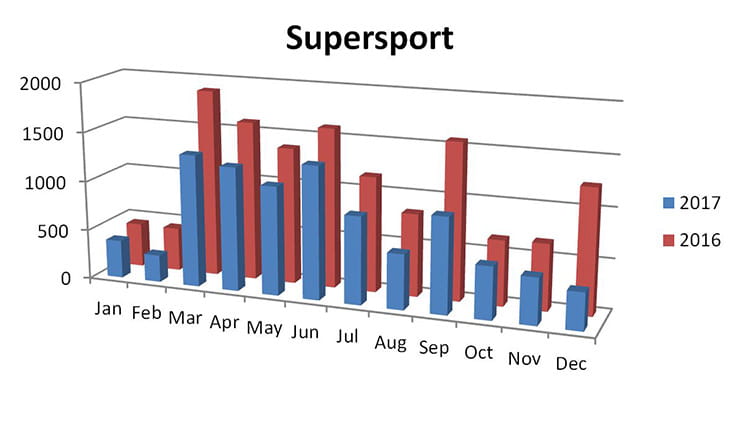 Whoa, check out the difference in December sales in the supersports market. More than three times as many were registered in December 2016 as in December 2017. There are also huge peaks in the 2016 figures for March and September when the new registrations came in.

The 600cc supersport class in particular has been left behind by the Euro4 rules, and several manufacturers updated their 1000cc supersports machines for 2017 to bring them into line. That clearly made for some attractive deals on 2016 models, and the December figures suggest dealers were still left with a lot of stock to pre-register at the end of the year. 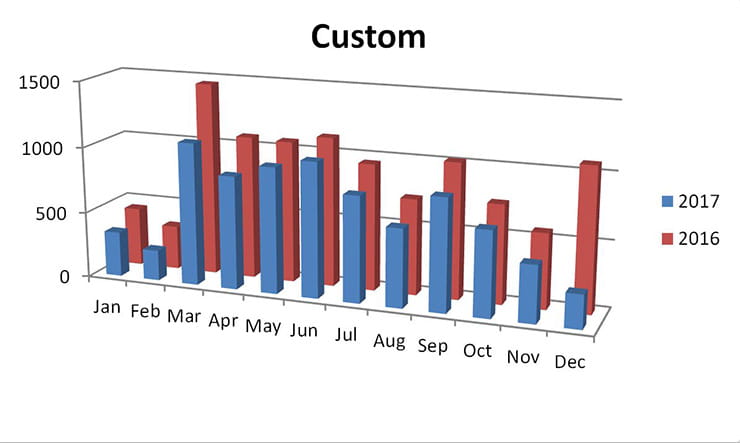 That insane December 2016 sales spike is even more evident in the Custom bike category. More than four times as many of the machines were sold in December 2016 as in December 2017! In fact, there was a 77.3% drop in sales in that month alone.

As our investigation a year ago into the bikes that were being discontinued under the new Euro regulations showed, cruisers were hit particularly hard. Honda, Yamaha and Suzuki effectively ditched all their traditional cruisers in the UK market, and most of Kawasaki’s V-twin cruisers also got the bullet. That leaves the American players – Harley and Indian – plus Triumph and a smattering of other brands.

However, if you took the extra 800 or so cruisers that were registered in December 2016 and spread them across 2017 (which is probably the reality of the situation, since most are likely to have been pre-registered and sold later), the overall drop in the class sales for the year between 2016 and 2017 would be far less significant.

Harley’s Sportster, Triumph’s Bonneville Bobber and Honda’s Rebel 500 (which Honda actually classes as a ‘street’ bike rather than a custom) each topped the charts. 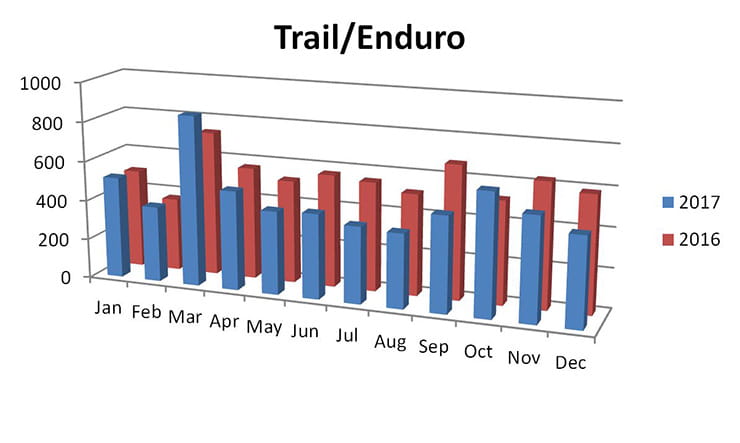 Unlike the other classes looked at so far, the drop in trail/enduro registrations in 2017 looks much more consistent across the year, with no real December spike. The class actually saw sales increases in March (coinciding with the new registrations) and October (which is around the time many of the new models in this class reach dealers). But most other months were consistently down.

However, the overall sales for the category are relatively small, so a single new model or manufacturer offer could skew the figures by a noticeable amount. 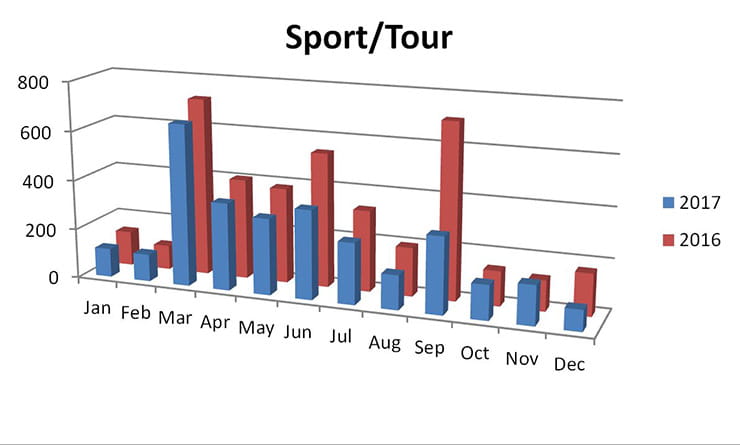 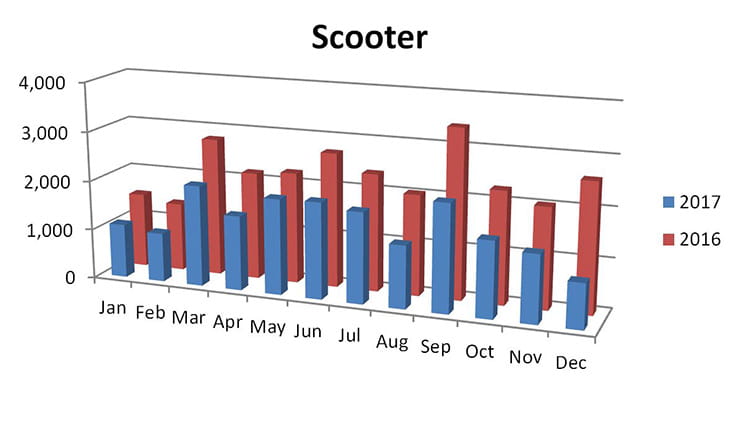 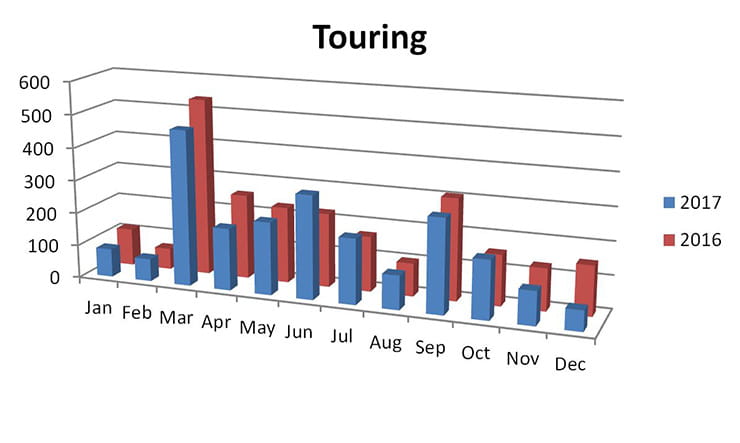 The sales sports-tourers and tourers are also relatively small, so individual models and deals could affect the overall year’s figures. In both the ‘Euro4’ sales spike in December 2016 is clear, while the sports-touring figures show a huge spike in September. That seems to have been driven by an unusually large number of Kawasaki Ninja 650s registered that month, superseding the Z1000SX that held top spot in the class every other month of 2017.

On the touring front, BMW’s R1200RT topped the sales chart every single month of 2017.

And then we’ve got the scooter category, which is virtually alone in showing a fairly consistent year-to-year drop from 2016 to 2017. Again, there was a spike in December 2016 sales, likely due to the impending Euro4 regulations, but generally the impression is that scooters are a completely different commodity to motorcycles. More a white-good than a purchase of passion, the sales drop here is far more likely to reflect the overall economic worries during the year and the post-Brexit referendum weakening of the Pound, pushing prices of imported goods upwards. 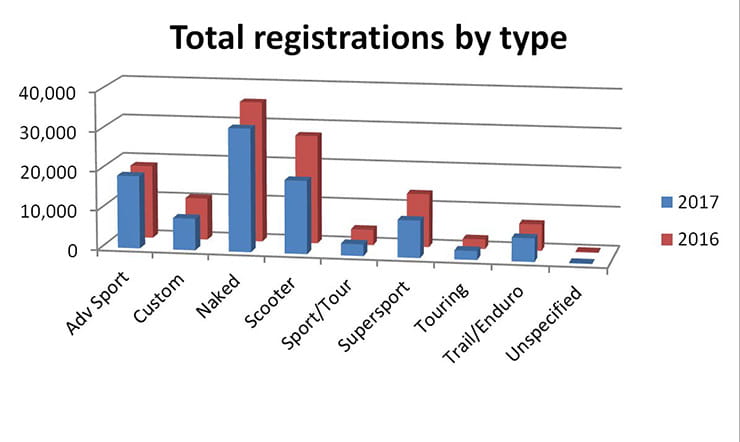 What to make of it all

The net result of all this is that it’s virtually impossible to make a clear-cut statement about the state of the UK bike industry in 2017. The bare figures tell a desperate story – total registrations down 18% compared to 2016 – but as we’ve seen there are other influences that make the situation less grim than it first appears.

“The phasing out of Euro 3 for new bikes definitely caused a distortion in the market.  We estimate between 12,000 and 15,000 extra new machines were registered in 2016 to meet the December 31st deadline and that in a normal market these would have been registered during 2017.
“Uncertainty around Brexit may also have affected consumer confidence but the good news is that there are some strong indicators that more and more people are recognising how useful motorcycles and scooters are as a mode of transport.

“The number of powered two wheelers registered for the road has been steadily increasing and you have to go back to the peak of 2009 to find higher numbers.  The number of people taking motorcycle tests has also been going up annually for the past four years.”

From a wider motorcycling perspective, the situation is actually brightening. An increasing number of riders are taking and passing tests and the overall number of bikes in use on British roads has steadily grown over the last few years.

So the sky isn’t falling, but with higher interest rates and the dust settling on the whole ‘Euro4’ issue now, 2018’s UK bike registration figures will give a much clearer insight into the direction that the market is going.