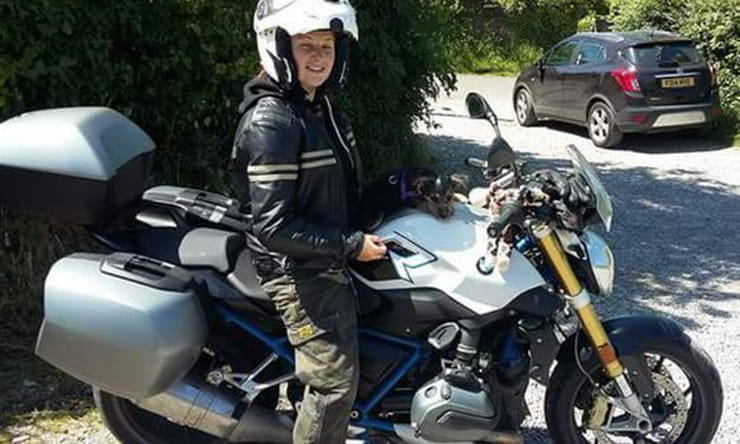 A five-hour late night mission, social media and a passing police car was all it took for motorcyclist Shannagh Cowie-Sparrowhawk to get her stolen motorcycle back.

Shannagh’s BMW R1200R was taken from where she’d parked it outside her friend’s house in Redfield near Bristol.

While she reported the theft to the police, her friend Emily began sharing details about the stolen bike on Facebook… A message posted at 11.30pm – just 5 hours after reporting the theft – was received from a person in nearby Barton Hill, saying the machine had been seen parked near their house.

Shannagh and her friends all jumped into a car and headed to the area where her bike was seen. After two hours of searching in the rain and darkness trying to find her bike, she started to worry that if she did find it, she might not be able to get it started, and worse, the thieves could attack her. But with it being worth £14,000, her only form of transport, and less than a year old, she continued the search until her phone’s battery died and she was unable to contact the sender of the message to get a more precise location.

On her way to another friend's house to charge her phone she flagged down a passing police car tell them of her theft, and the officers willingly joined in the search.

While Shannagh and her friends tried to make contact with the person who’d seen the bike, at 3am she received a call from the police saying they’d found the bike; it was down an alley near to where Shannagh had started looking, and only about a mile or so from where it was taken. This is often the case, as crooks leave bikes tucked away to see if they’re recovered by a tracking device, rather than risk being caught with it if there is one.

When she arrived to collect it she found that the thieves had broken the steering lock and ignition barrel where they’d attempted to start it, but the police officers offered to wait with the machine until it could be recovered.

Shannagh says she is overjoyed to have her bike back and very grateful to the people on Facebook that assisted her, and the speed and kindness of the police officers who helped her recover it.