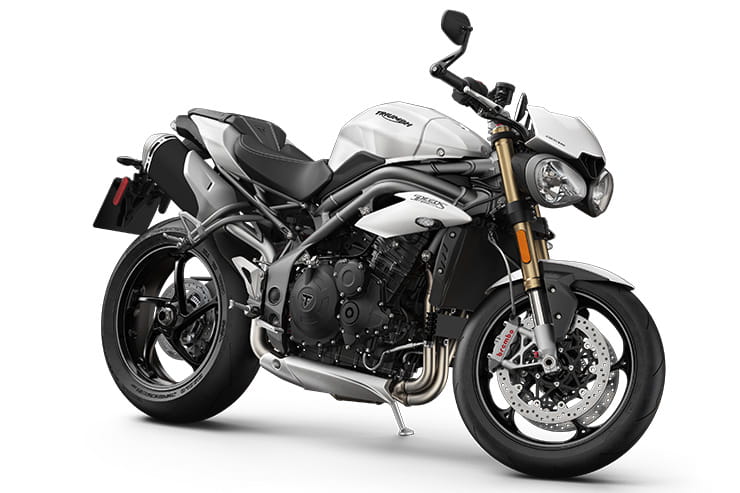 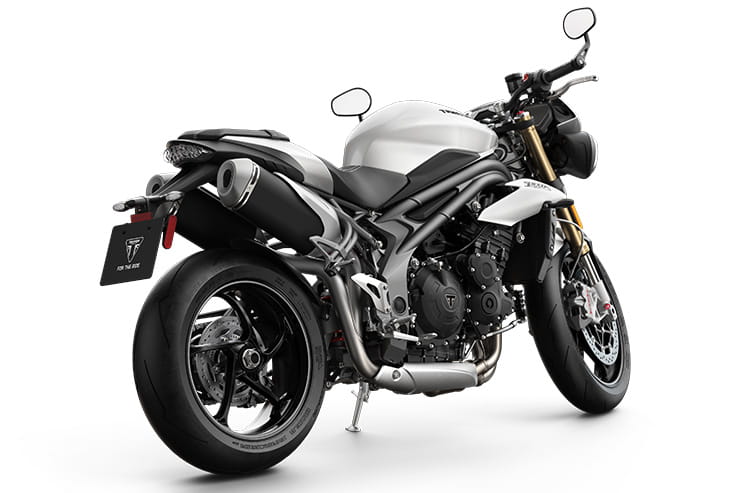 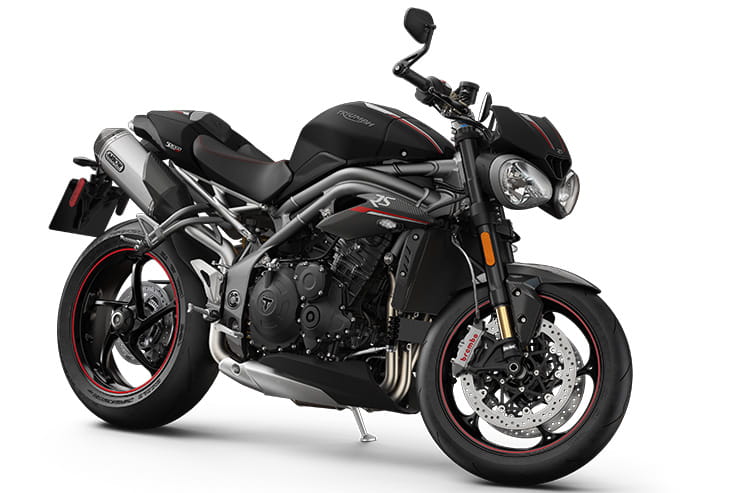 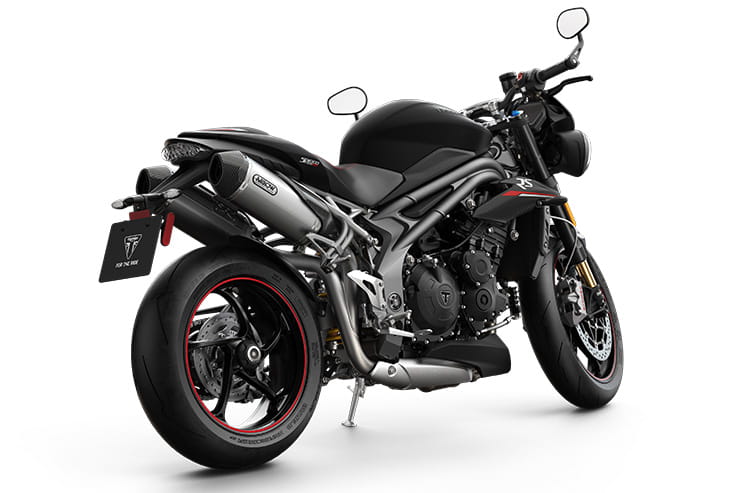 After weeks of teasing Triumph has unveiled the latest upgrades to its Speed Triple range including the addition of a new ‘RS’ model.

The revamped range sees the old Öhlins-suspended, Brembo-braked ‘R’ version of the bike dropped, with the similarly-equipped but much-improved ‘RS’ variant taking its place. The entry-level ‘S’ model remains, but also with significant upgrades.

The headline alteration is the engine. It sticks at 1050cc but both models get a power boost from 138hp to 148hp (150PS). As we predicted, a new cylinder head is largely responsible for the increase. It’s got improved porting for better gas flow and a higher compression ratio at 12.92:1, up from 12.25:1. The engine also gets new pistons and lighter Nikasil-plated liners, plus a lighter crank gear and smaller starter motor. The alternator is lighter than before, and so is the battery. Externally there’s a new sump and by re-routing the oil passages to the cylinder head, Triumph has been able to remove the visible oil pipes of the old engine.

The 7% power increase is backed up with a 4% boost in torque, from 112Nm to 117Nm. Importantly that peak is also lower in the rev range, at 7150rpm instead of 7850rpm. Peak power, conversely, occurs 1000rpm higher than before at 10,500rpm instead of 9500rpm. Thanks to the lighter internals it spins up faster than before, as well as having a higher redline.

Altogether, Triumph counts 105 new or redesigned engine components. But it hasn’t stopped there. The exhaust is also new, with a larger catalytic converter and lighter header as well as redesigned silencers for the ‘S’ version. The ‘RS’ comes as standard with lightweight Arrow cans. 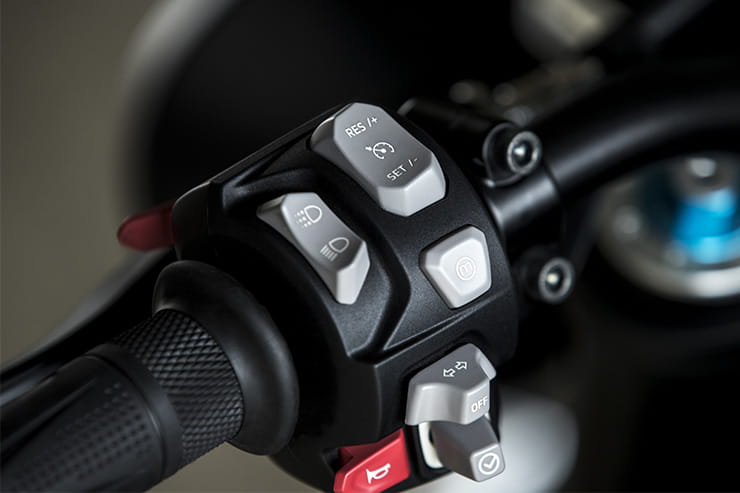 Engine aside, Triumph has put effort into improving the bikes’ electronics. The new TFT colour dash was already evident in the very first teaser video and is used on both models.  It’s five inches across and includes all the usual information and adaptability that we’re getting used to from such LCD displays.

Both Speed Triples also get Triumph’s latest generation switchgear including illuminated buttons, plus cruise control and a selection of different riding modes; four on the ‘S’ – rain, road, sport and rider-configurable – and five on the ‘RS’ which adds a ‘track’ setting as well.

While switchable ABS is, of course, standard, the RS also gets a Continental IMU (inertial measurement unit) that enables cornering ABS and traction control. Other RS tech goodies include a keyless ignition and steering lock system. 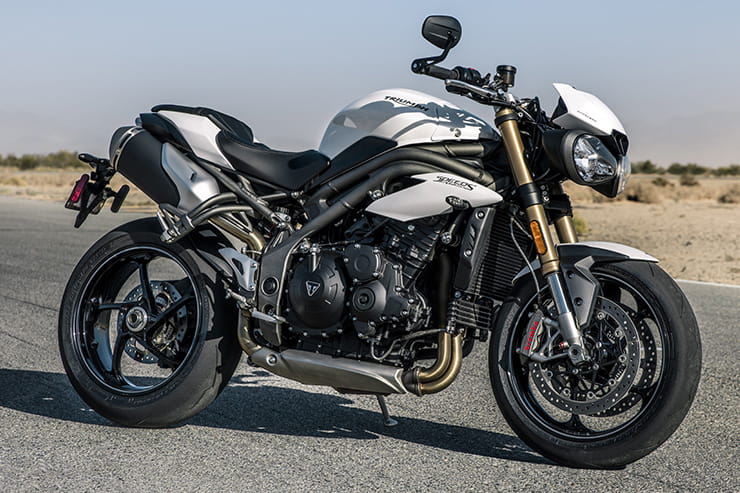 On the chassis side, Triumph claims the bikes are the ‘most agile and focussed rider ever’ although there are few notable changes over the previous models’ specs.

While the RS claims a 3kg weight saving over the old R model, 189kg dry vs 192kg for the 2017 bike, the basics of the suspension and brakes are unchanged.

The S sticks with Showa kit, fully adjustable at both ends, while the RS uses the same Öhlins NIX30 forks and TTX36 shock as the old R model. As before, both have Brembo Monobloc calipers at the front, grabbing 320mm discs.

What has changed are the wheels. As seen in the teaser videos over the last couple of weeks, the new bikes both have five-spoke wheels instead of the 10-spoke design used on the previous versions.

The styling is largely unchanged apart from the new exhausts, while the RS gains a smattering of carbon fibre on the mudguard and radiator cowls.

Prices have yet to be revealed, although it’s unlikely that they’ll be a million miles from the existing versions’ tags, which are £10,700 for the S and £12,100 for the ‘R’ that the new ‘RS’ effectively replace.