Motorcycle crime update: Joyriders are back 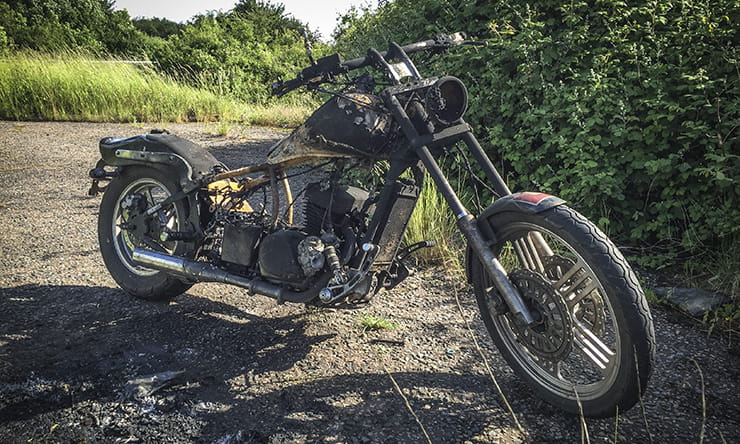 This form of theft often resulted in a pile of molten metal on the thicket path, or a burnt-out shell in the Spar car-park. The difference to many of the modern-day thefts is that these bikes and cars weren’t stolen to be stripped and sold for parts, or shipped out of the country to new ‘owners’; they were pinched simply for a night of ‘fun with mates’.

Sadly, it seems the joyriders have returned, unfortunately with the old habit of torching the vehicles and rendering them worthless. These mainly gang-led youngsters – eager to gain admiration and status from the highly organised car criminals that operate in the UK – are stealing the easiest of targets and burning them, as one arrested youngster suggested “because they can.”

Ironically, the easiest targets have been identified as the 30-year-old classic cars and motorcycles that suffered so much in the past; the majority are now actually equal or greater in value than their modern counterparts, but simply don’t have the same advanced security that today’s vehicles enjoy.

The rapid rise in the torching of these machines is yet another worry for the country’s already overburdened police forces.

Innocent owners of classic cars are being urged to be better prepared for theft and encouraged to purchase extra security such as ignition cut-outs, steering-wheel locks and wheel clamps – all popular anti-theft methods for these vehicles in the in the 1990s. Owners of classic bikes should also employ security measure, such a chains, locks and ground anchors.

The first few hours after a theft are vital for the police in helping to identify the criminals, and with bikes and cars often being destroyed after the criminals have had their ‘fun’, quick recovery through the use of a tracking device is by far the best bet. You can find out more about trackers here.

New Honda motorcycles come with the option of a Datatool TrakKing system, while many Piaggio, Vespa, Aprilia and Moto Guzzi retailers are helping buyers to install Tracker-branded devices.

The leading tracking operators boast up to a 90% recovery rate, but the problem remains that far too many people – classic bike owners included – don’t ever think it could happen to them…