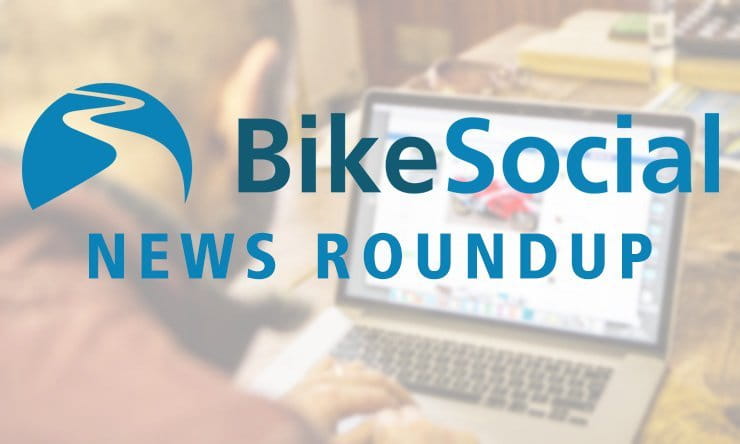 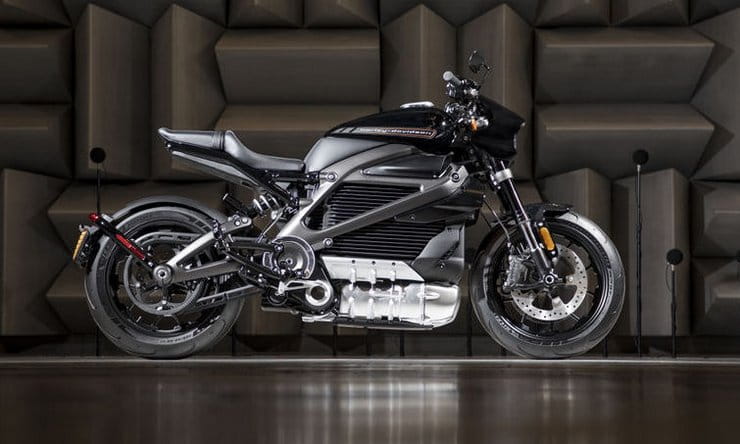 There’s an electric theme to this week’s news round-up, kicking off with the news that Harley-Davidson is to unveil the final, production version of its 2019 LiveWire electric bike at the EICMA show in Milan next week.

We’re not expecting any real changes compared to the near-production version seen earlier this year, and pictured above.

In a press release, Harley wrote:

The all-new electric Harley-Davidson® LiveWire will make its European debut at EICMA, Milan on November 6, 2018. The first public viewing of the electric-powered LiveWire™ in Europe will give show visitors the chance to get up close to the production-ready motorcycle – previously only seen in prototype format. 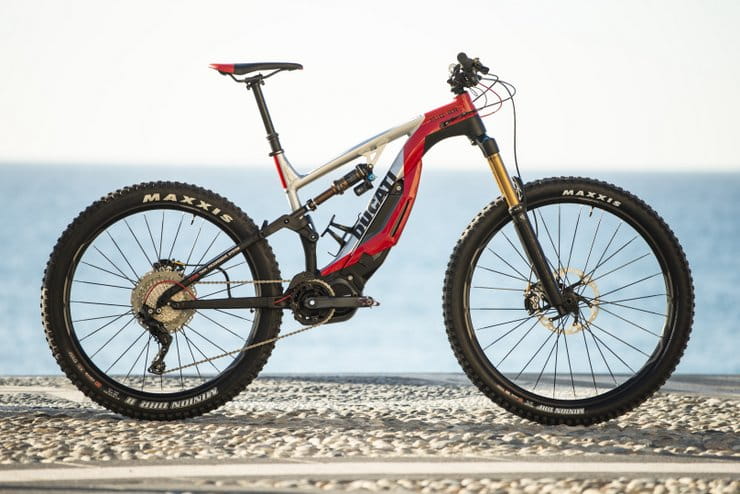 What? An electric Ducati? Well, sort of. The Italian firm has announced an electrically-assisted mountain bike- the MIG-RR – as the result of a collaboration between Ducati and Thok Ebikes.

So it’s not really a Ducati, per se. But the firm’s design department, along with Aldo Drudi’s D-Perf company, helped out with the design and graphics, and the bike will be sold from Ducati stores throughout Europe next year.

The Ducati MIG-RR, which will make its public debut on the Ducati stand at EICMA 2018 (Fiera Milano Rho, 8-11 November), is a true high-end e-mtb developed by Thok Ebikes specialists in close collaboration with Aldo Drudi's D-Perf and the Ducati Design Center.

While the new Ducati e-mtb is an offshoot of the popular MIG series produced by Thok, it features some unique technical solutions: wheels with different diameters and suspension set-ups with different degrees of wheel travel (29" and 170 mm at the front, 27.5" and 160 mm at the rear) make it a true enduro that meets the needs of even the most demanding rider.

The battery is positioned underneath the down tube. The resulting low barycentre makes the Ducati MIG-RR an easy-to-ride yet precise bike even on the toughest terrain.

The Ducati MIG-RR will be distributed throughout Europe via the Ducati dealership network starting from spring 2019. 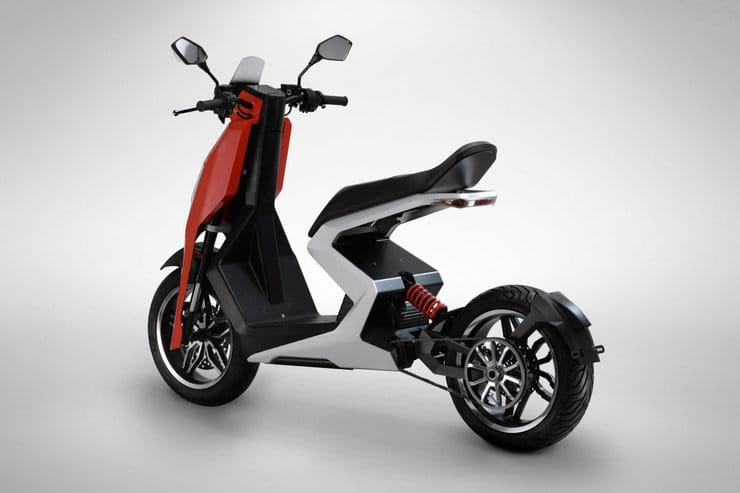 Our electric news continues with the first look at the new i300 scooter from British firm Zapp.

Powered by a 14kW electric motor, the firm is claiming it can sprint from 0-30mph in 2.4 seconds and tops out at 60mph. Clever features include a removable battery, about the size of a laptop, so you can park the i300 on the street and bring the battery indoors to charge, or you could swap a flat battery for a fully-charged one for an instant refuel.

The new Zapp i300 is powered by a pair of cutting-edge, lightweight lithium-ion batteries and a maintenance-free air-cooled interior permanent magnet electric motor. The i300’s 14kW motor produces 587Nm of torque at the rear wheel, which combined with a lightweight construction of 90kg, means a 0-30mph time of less than 2.4 seconds.

The easy-to-transport batteries enable owners to charge by simply removing the battery and plugging it into any household socket. Convenience and practicality is maximised, while range anxiety is now a thing of the past.

To give users extra range on the go, the new Zapp i300 includes rider-selectable ‘regenerative braking’, which returns energy when the rider shuts the throttle. Using the regenerative braking system as the primary means to slow down in heavy traffic not only increases the longevity of the scooter’s brakes, but also reduce another pollution element – particulates.

The Zapp i300 can be configured to match any taste or style. Individuality is encouraged during the build process of every scooter, with a generous pallet of colours, comprehensive suite of carbon fibre components, different seating options and other useful storage and sporting accessories.

Swin Chatsuwan, Zapp Chief Executive said: “With air quality in cities worsening and our roads becoming increasingly congested, the world needs new alternatives to urban transport. With its revolutionary design, thrilling performance, and clean power source, we believe the i300 is the urban mobility solution people have been looking for.

“There are already electric scooters out there, so we only ever intended to bring something highly innovative and hugely desirable to the market. There is nothing like the Zapp i300, either from a design or functionality and practicality perspective. We are very proud of what we have created and think commuters will like it as well.” 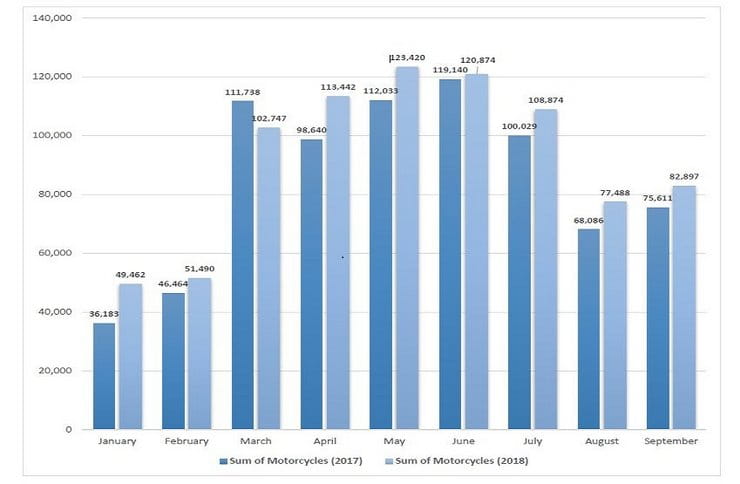 Motorcycle sales in Europe have risen during the first nine months of 2018, improving by 8.2% compared to the same period in 2017.

Only one EU country, Poland, has seen motorcycle sales decline so far this year.

To continue our electric theme, the sales of battery-powered bikes in the EU are up 52.8%, totalling 36,270 so far this year. It’s still a small proportion, but one that’s growing faster than any other part of the market.

At the other end of the scale, mopeds are suffering. Across the EU, sales of sub-50cc machines dropped by 26.1% to 209,562 compared to the same period last year. It’s thought that the decline could be largely due to city-bound commuters opting for electrically-assisted bicycles (like Ducati’s new MIG-RR, above) instead of mopeds. With no need for road tax or insurance, and performance that’s not too far shy of a moped, these electric machines form a fast-growing market, but one that’s hard to keep track of due to the fact that electric bicycles aren’t registered. 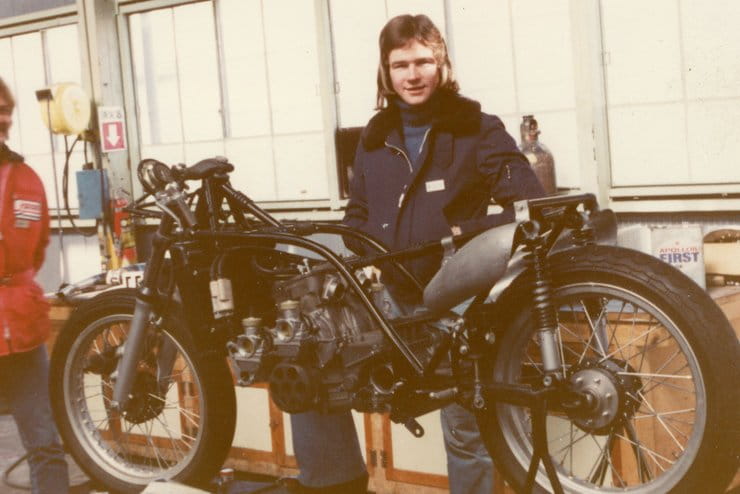 5: Suzuki to rebuild first ever RG500 at Motorcycle Live

Suzuki is to rebuild the first RG500 GP bike live on stage at Motorcycle Live later this month.

The G-54 is the machine that came before the famous XR14, and former GP mechanic Nigel Everett will be carrying out the rebuild.

In fact, the bike will be rebuilt twice during the show at the NEC, which runs from 17-25 November.

The plan is to rebuild it once over the first weekend, ready for a fire-up on stage on Monday 19 November, before stripping and rebuilding it all over again in time to start up a second time on the final day of the show, Sunday 25 November.

Suzuki GB’s aftersales co-ordinator, Tim Davies, said: “I think this is the most excited we’ve been for our Motorcycle Live feature build, and that’s saying something as we’ve managed to do some really cool projects in the past, from restoring a Kevin Schwantz RGV500 to building a brand new TL1000S from parts. But this bike – the G-54 – is a really rare and really special thing. It paved the way for Suzuki’s return to Grand Prix racing and spawned the bikes that took Barry Sheene to world championship glory and was raced by some incredible riders in its day. It is probably one of the most important bikes from our history, so to not only be able to restore it using our Vintage Parts Programme but do so with the likes of Martyn Ogborne and Nigel Everett is really special.”

The G-54 was created in 1973 as Suzuki prepared to return to top-level GP racing in 1974 after a five-year hiatus. Barry Sheene rode it to 2nd place in its first ever race, at Clermont Ferrand in France in April 1974, and during the year it was ridden by Sheene, Paul Smart and Jack Findlay.

Paul Smart will be on hand at both weekends of the NEC show during the rebuild.