Arch Motorcycle arrives in the UK 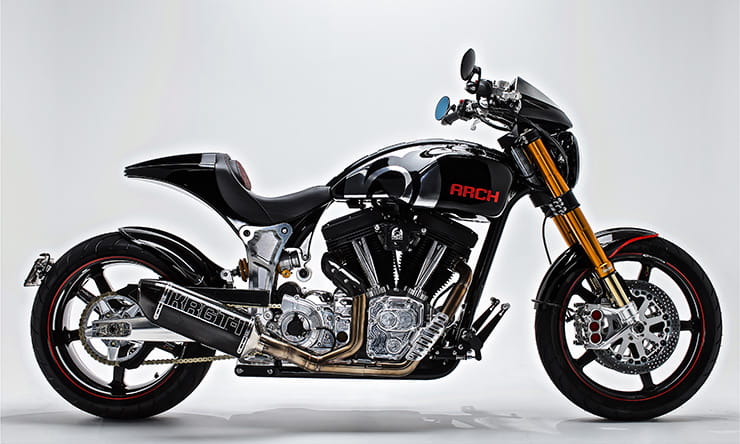 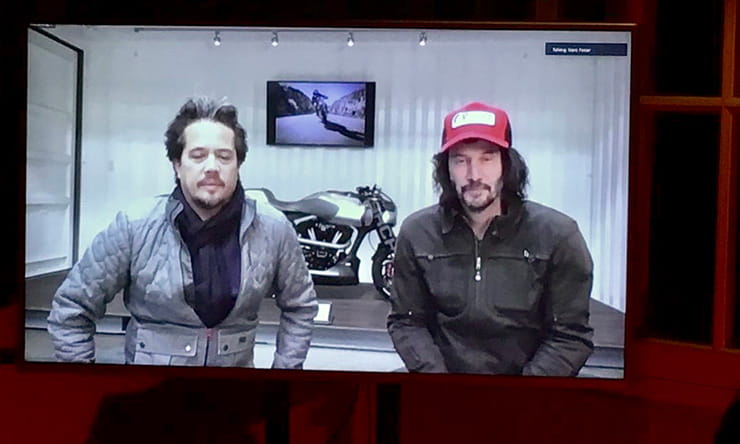 Last night Arch Motorcycle (annoying, they call their company in the singular) made its official UK debut. You may or may not have heard of Arch, but you have almost certainly seen its owner. Based in Los Angeles, America, Arch is headed up by highly-regarded special builder Gard Hollinger and Keanu Reeves. Yes, THAT Keanu Reeves, star of Bill and Ted’s Excellent Adventure (if you are of a certain age), The Matrix, Speed, John Wick and a stack load more box office hits. So how on earth did a bona fide Hollywood star get involved in building a bike?

“In 2011, I asked Gard to design a bit for my bike,” explains Keanu Reeves. “I had a Harley at the time and I asked him if he could make me a sissy bar. He looked at me as if I was an idiot but I redeemed myself by saying ‘so what you got going on?’ and he took me into his shop and showed me his bikes. I ended up asking him to design me a motorcycle – a cruiser that could do long distances but would also handle. He said, ‘what about if we build something from the ground up?’ – five years later we had the prototype for our first Arch motorcycle. At which point Gard grudgingly agreed to start a new motorcycle company with me.”

While it may sound like a pet project for a Hollywood star, Arch is far from something Keanu has just done on a whim and when you hear him speak you realise he is a proper petrol head. From the word go he has been heavily involved in the bike’s design and alongside Gard has ensured that no corners have been cut. The result is the KRGT-1, which has just made its UK debut after three years of development.

“We have a small factory, but it’s a proper factory and we manufacture most of the parts for the KRGT-1 ourselves,” said Gard Hollinger. “We are a proper motorcycle manufacturer, making around ten hand-built bikes a year.”

In the flesh the KRGT-1 really is impressive, but that’s no surprise when you consider the workmanship that has gone into it. The frame is a steel backbone, but just about every other part is absolutely top-draw. The tank is made from billet aluminium, as is the seat unit, swingarm, engine cases, footrests, you name it. And where it isn’t aluminium it is carbon with BST carbon wheels and carbon mudguards. The suspension is Öhlins, the brakes huge six-piston radial units and the dash a trick digital display. But all this workmanship and use of quality components comes at a cost and at £89,500, the Arch is out of most rider’s budgets. 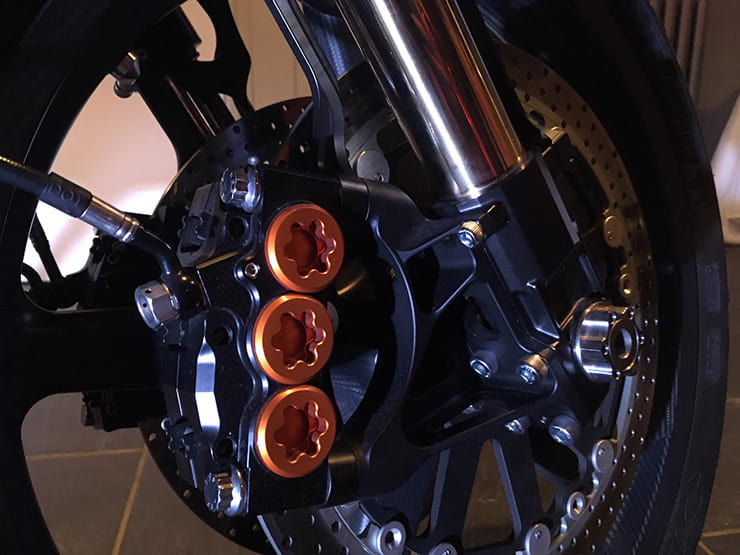 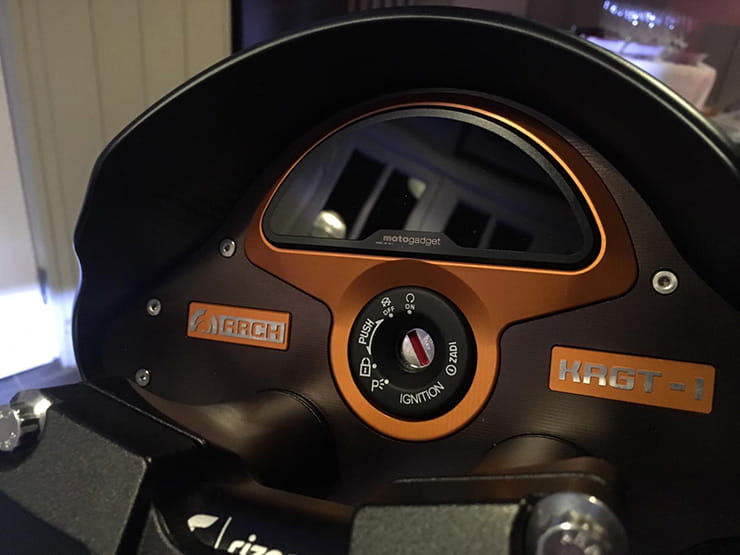 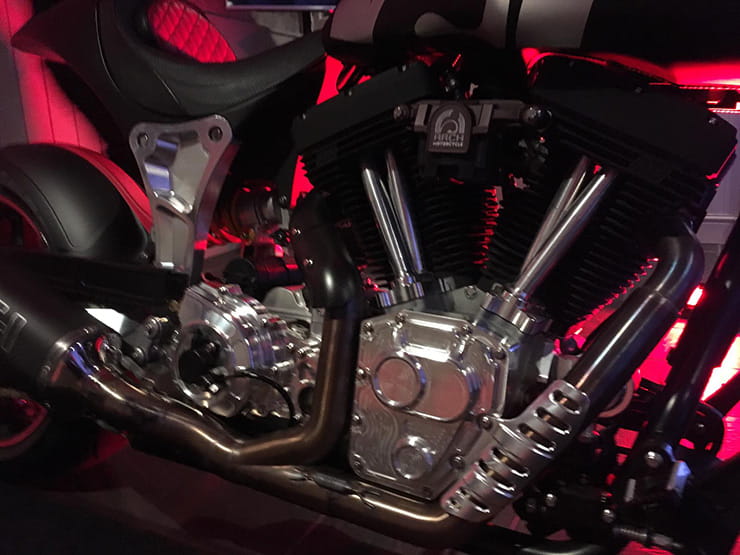 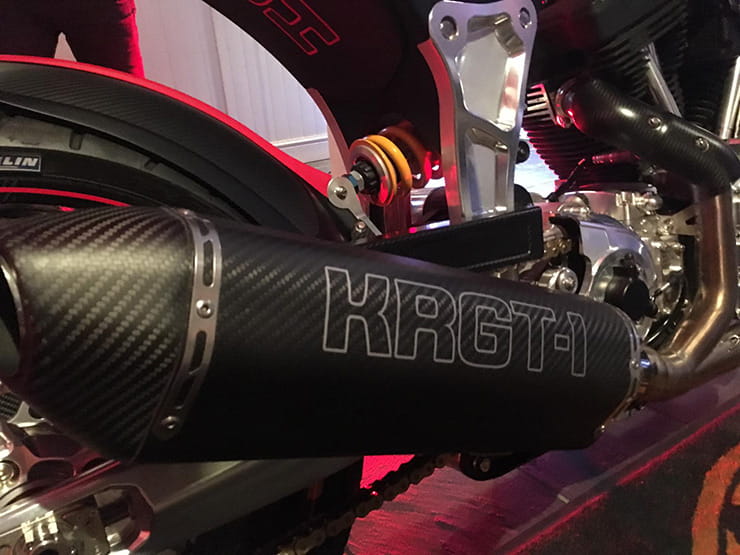 “Each bike takes 544kg of raw aluminium billet, which we then machine down to 54kg-worth of components on the motorcycle,” said Hollinger. “If we did one bike at a time it’s about a four-month process, but we batch manufacture the parts and so it takes us about 90 days in reality. Once we have all the parts it takes two weeks to actually assemble the bike.”

Powered by an American-built S&S air-cooled V-twin 2032cc motor, which packs around 120bhp and 120ft-lb of torque, the Arch has performance at its heart. “It’s a quality motor – and is also fast and sound and feels great!” enthuses Reeves. While Hollinger adds “It also passes emissions laws and S&S were happy to work with us to make a few bespoke parts such as the down-draft intake to help keep the Arch narrow so that nothing gets in the way of your leg when you ride.”

As you would expect on a £89,500 bike, every Arch is personalised to its individual owner through colours, foot rest positions, finishes, seat etc. “We haven’t had anything too crazy yet…” says Reeves. And there is also an Arch ‘family’ where the team who build them and their owners get together for various events or rideouts. Basically, it’s an excuse for Keanu and Gard to get out on bikes, drink beer and have fun… 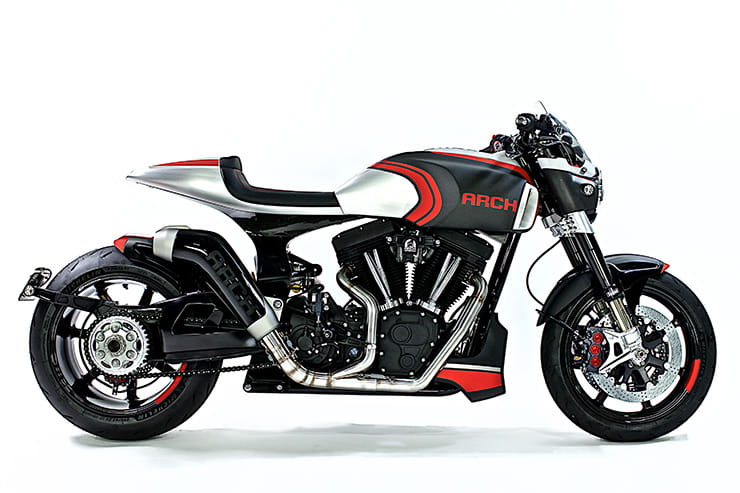 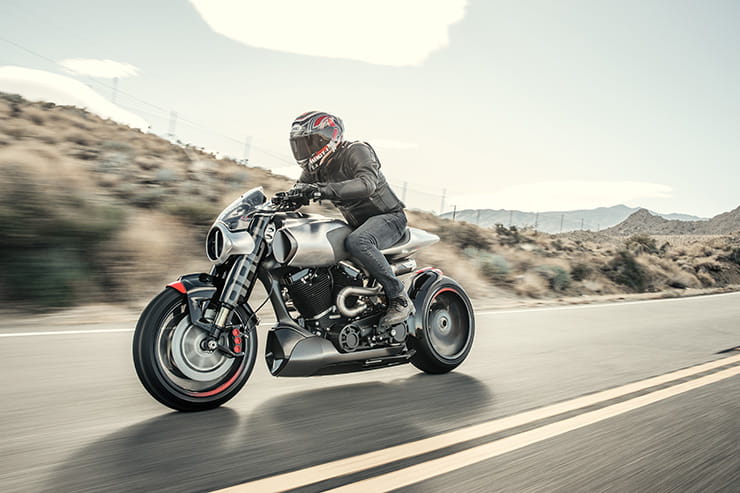 “I love riding and to create a motorcycle company has been a dream and is a great pleasure,” said Reeves. “And we are pushing forward with new models.”
Arch will be launching the KRGT-1S in summer, which is a sportier version of the KRGT-1, and are planning on building their bonkers Method 143.

“The Method is a concept bike that got out of hand!” explains Hollinger. “But we want to build it – and just like its concept, not a watered-down version! It has a carbon monocoque chassis and only 23 will be made. It’s a production concept motorcycle that isn’t restrained by regulatory guidelines, which means it will be tricky to get road-legal, but it will be very special and exotic…”

Far from a fleeting interest, Arch are considering their longterm future and are looking at electric bikes and even a small capacity 450 model, but they are quite a few years away as they still have a few KRGT models to build and develop in the meantime.

If you are interested in seeing an Arch, the KRGT-1 is currently on display at The Bike Shed Motorcycle Club in Shoreditch, London, and at Motorcycle Live at the NEC. More information can be found at Arch Motorcycle UK’s website www.archmotorcycles.co.uk