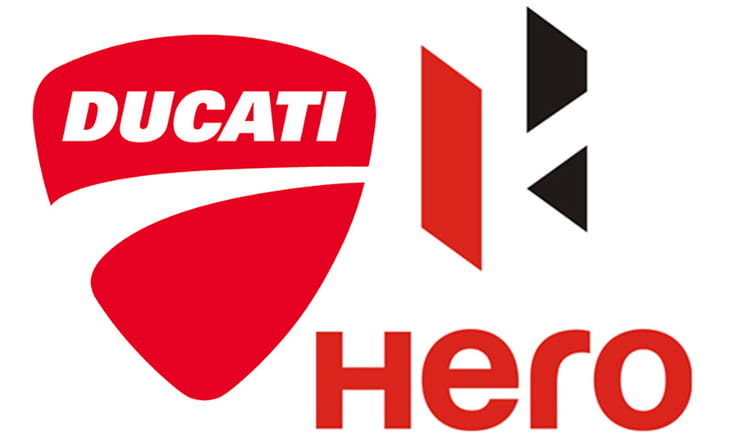 Forging connections with Indian bike firms is all the rage at the moment. KTM and Bajaj are joined at the hip, with Bajaj also due to help create a small-capacity Triumph soon. BMW has a partnership with TVS to build the G310 range, which is also the basis of the TVS Apache RR310. Just recently Harley-Davidson has revealed it will make a small-capacity bike with the help of an as-yet-unnamed Indian partner. And now rumours has it that Ducati is preparing to ink a deal with Indian firm Hero MotoCorp.

Hero was formed as Hero Honda back in 1984, but Honda pulled out of the venture in 2010, leaving the Indian firm to go it alone. Since then there have been indications that Hero would like a western partner – it bought a 49% share in Erik Buell Racing in 2013, with EBR helping develop a 250cc sports bike.

Last year there was talk that Hero was a contender to buy Ducati if its owners, the VW Group, opted to sell. That didn’t happen, but now Indian rumours suggest Ducati is looking for a partner in India to help create a small, 300cc-class single-cylinder machine, with Hero the most likely option

The new motorcycle in question will use a fuel injected single cylinder engine. And it will be liquid cooled. The engine most likely will be developed by Ducati, and it will be produced lock, stock and barrel in India by Hero. Also, from what we have learnt, the new engine might displace around 300cc.

Furthermore, the new small Ducati platform might spawn two motorcycles. The engine, gearbox, brakes, wiring harness, and other mechanicals will be identical for the two bikes. But, while the cheaper version might draw styling cues from the Scrambler range, the more expensive version will be a mini-Multistrada. Much like the G 310 R and the G 310 GS if you like.

We say: Ducati might have been wed to the idea of V-twins for the last few decades but the Panigale V4 shows the firm is finally prepared to explore other ideas. There are plenty of singles in the firm’s more distant past to draw inspiration from. A small-capacity single – presumably Desmo-valved to distinguish it from its rivals and give a proper Ducati flavour – would certainly provide a completely new entry-level foothold for the next generation of Ducati fans. 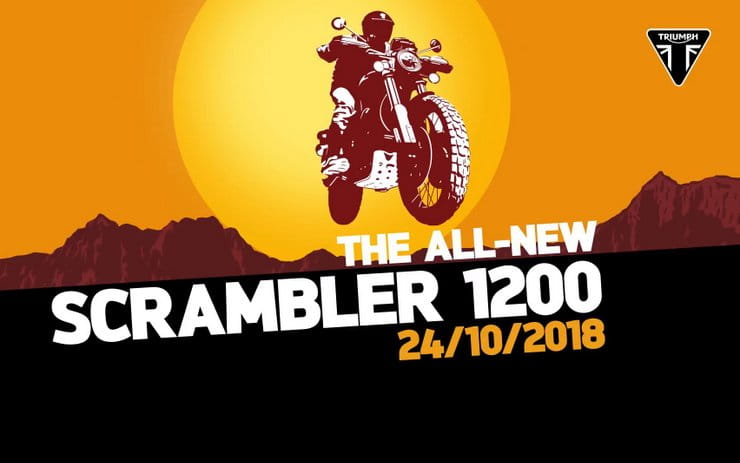 A brief 10-second YouTube video showing little more than the image above is the first official confirmation from Triumph that its Scrambler 1200 will be launched later this year. On 24th October, in fact, which slots in between the two big shows of the year – the Cologne Intermot event is from 3rd-7th October and Milan’s EICMA show runs from 6th-11th November.

We’ve already seen spy shots of the new Scrambler, of course, and the stylised image shown in Triumph’s teaser matches them perfectly.

All indications are that the Scrambler 1200 will sit near the top of the firm’s Modern Classics range, up there with the Thruxton R. The spied prototypes have been dripping with Brembo and Ohlins kit, along with the sort of aluminium detailing that’s helped make the Bonneville Bobber so much more interesting than its rivals. A lower-spec version without the Ohlins suspension might also emerge, a sort of off-road equivalent to the non-R version of the Thruxton, but Triumph will want to keep a clear distinction between the Scrambler 1200 and the much cheaper, 900cc Street Scrambler that’s already in the line-up. 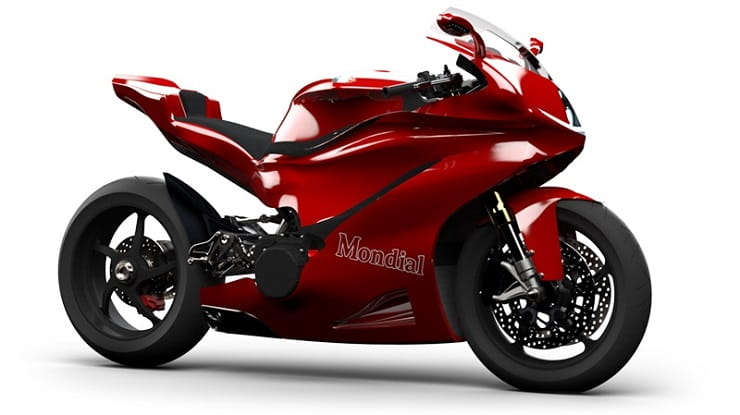 A few rather student-standard computer-modelled images and an ambitious spec-sheet is all we’ve seen so far of MondialMoto’s new ‘V5R’ and ‘V5S’ superbikes. And while the firm says it’s happy to take €10,000 deposits for the V5S (against a planned €27,995 price) and €15,000 deposits to secure a V5R (priced at €35,995), we’d like to get sight of something a bit more solid before reaching for the debit card.

The firm, which isn’t related to F.B. Mondial, says that both bikes will be made next year and revealed at the EICMA show in Milan in November 2019. They share a 1000cc V5 engine claimed to make 200hp, with the R using a carbon-fibre frame while the S has an aluminium chassis. You can find the rest of the specs at the firm’s website here.

Ten years ago we observed the market and realised that if we were going to design and build a new superbike, it had to be very different from what is already being produced. Motorcycle manufacturers have been producing twins, threes and four cylinder bikes, so building another bike using this configuration does not stimulate the market, it suffocates it.

MondialMoto is different. To ensure our long-term success, we first consulted industry leaders and many other people who are passionate about superbikes. After thorough research we concluded there was only one real choice for us to make. The world of motorcycling is crying out for a superbike that will stir emotion, imagination, adrenaline and bring with it excitement. Our choice was to conceive a V5 superbike.

The only other manufacturer to produce a V5 dominated Moto GP for 5 Years. We at MondialMoto will follow that tradition with a V5 Moto GP bike for the street.

We say: Fifteen years ago the idea of a 200hp V5 superbike would have been mouth-watering, provided it carried a Honda badge and was related to the RC211V GP bike. But the reality is that the RC211V was built using a V5 simply to make the most of a loophole in the MotoGP regulations concerning minimum weights, not because the V5 format had an ingrained advantage. If anything, it was the opposite – the uneven cylinder count made for tricky balancing.

And to be pedantic, MondialMoto’s suggestion that the only other manufacturer to make a V5 dominated MotoGP for five years isn’t quite true. They’re forgetting Kenny Roberts’ homebrewed Proton KR5, which trailed around at the back of the field in 2003 and 2004, proving that making a V5 engine wasn’t as easy as Honda made it look… 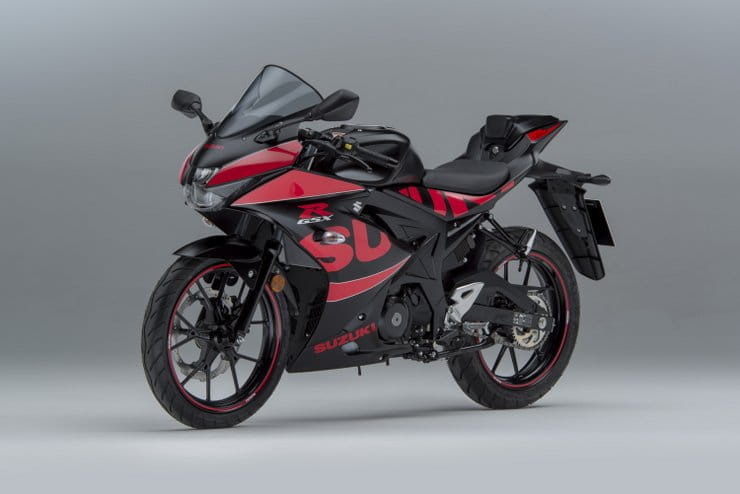 Suzuki has announced deals for buyers at both the bottom and the top ends of its sports bike spectrum.

The first is a £1000 trade-in bonus that applies to anyone chopping their current bike in for a GSX-R1000R, GSX-S1000 or GSX-S1000F this weekend. Applying only from 17th-19th August, the deal means Suzuki will accept any make or model as a trade in, and will add an extra £1000 to its offer for the bike.

Suzuki GB head of motorcycling, Jonathan Martin, said: “Our trade-in weekend really does represent an excellent opportunity to get your hands on a brand new GSX-R1000R, or the flagship GSX-S1000 and GSX-S1000F. Trading in your old bike removes the hassle of selling privately, with the value going towards any deposit put down against the new bike. And with the additional £1000 off the RRP for one weekend only and current low-rate finance deal, it’s a great time to get even lower monthly repayments, making the whole purchase even more affordable.”

The second deal applies to the GSX-R125. Suzuki has released an accessory pack and graphics kit for the bike (pictured) that includes a pillion seat cowl, double-bubble screen, red graphics kit and red wheel rim decals. It’s priced at £330, which represents a £160 saving over buying the components individually. 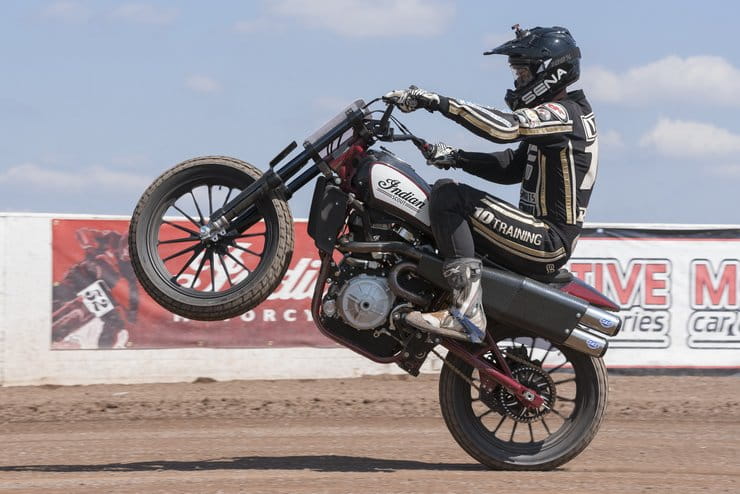 The Scout FTR750, which has dominated the American Flat Track championship since its debut in 2017, will be ridden by a selection of famous riders, each trying to go faster than the last. Confirmed riders taking part so far include Neil Hodgson, Steve Parrish and Jenny Tinmouth, with more expected to be added over the weekend.

You can find all the details of DirtQuake and buy tickets at the official website here, and even if you can’t make it, the event is being filmed to be shown on ITV4 later this year.