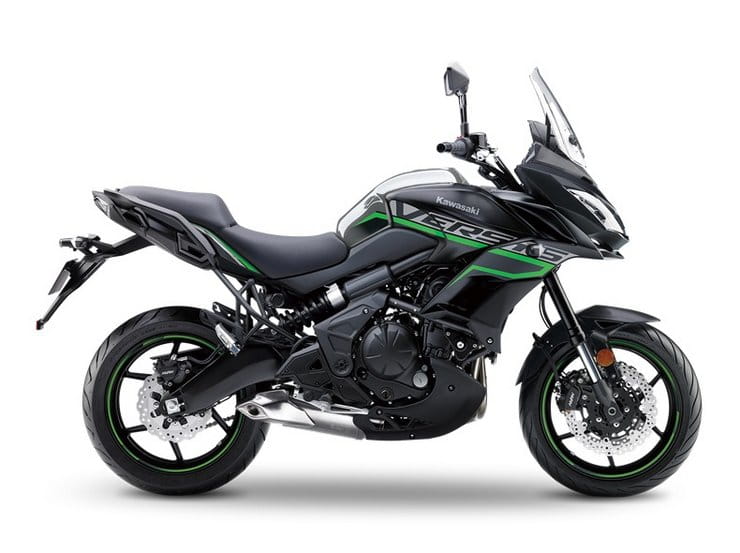 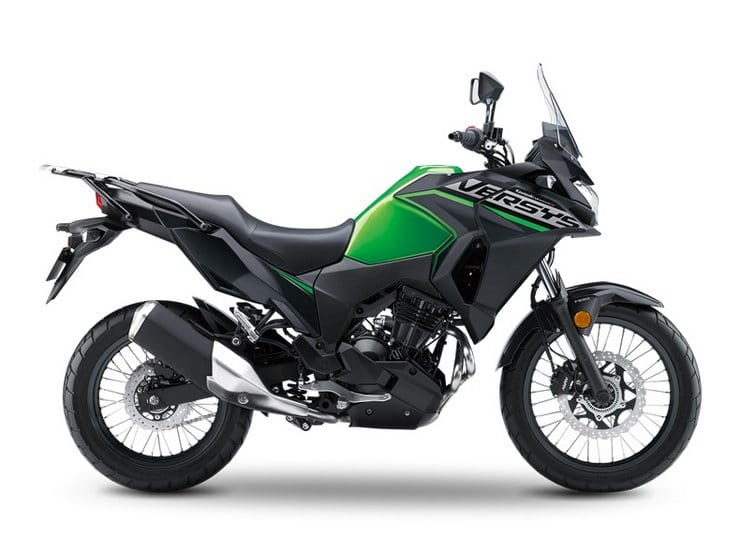 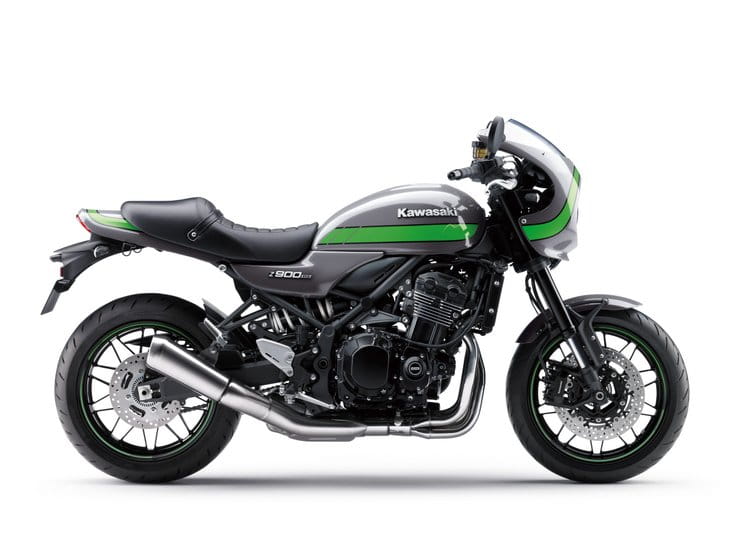 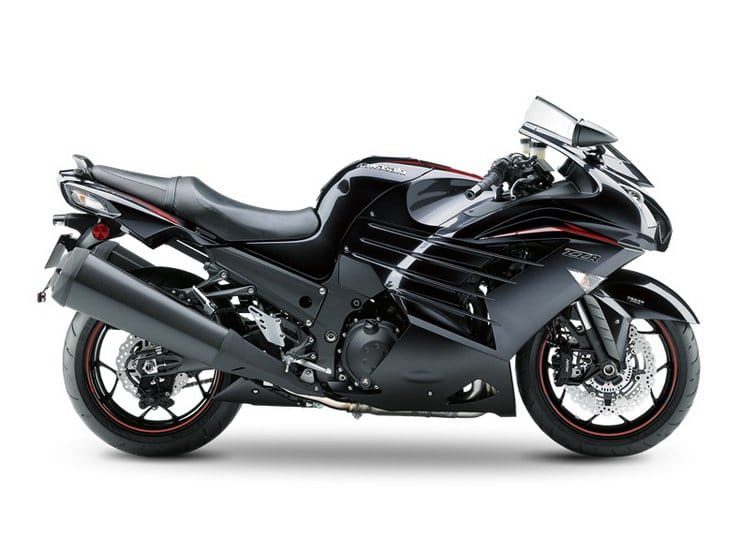 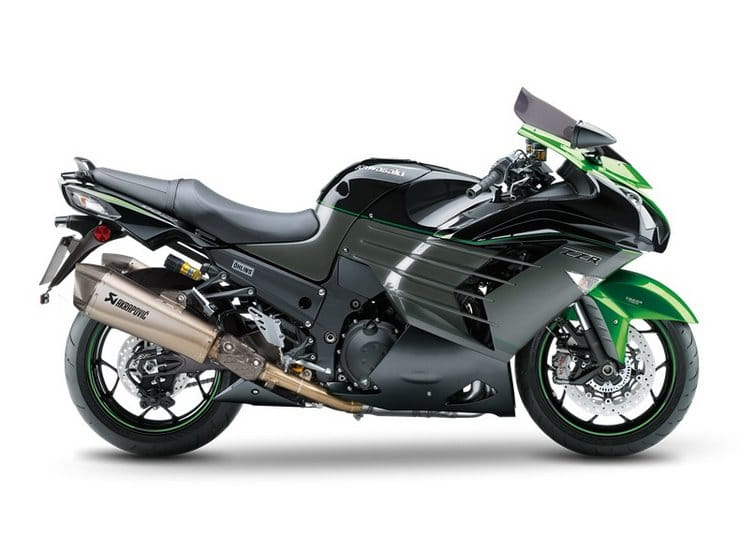 In the run-up to the exciting new model launches each year there’s inevitably the more low-key announcement of ‘bold new colours’ on those bikes that are otherwise unchanged. And Kawasaki has released another batch of its 2019 schemes.

Changes include a new black-and-red look for the ZZR1400, with the higher-spec Performance Sport version – equipped with Brembos, Ohlins and an Akrapovic pipe – gets a black/grey/green scheme that looks a lot like last year’s base model’s colours.

Turning to the retro range, the Z900RS Cafe – previously offered only in traditional, eye-searing Kawasaki green – gets a more subdued grey option, albeit still with green stripes.

On the adventure side of things there’s a new set of colours for the Versys 650 and Versys-X300, with both bikes gaining new graphics and colour combinations, with black-and-green appearing to be a consistent theme.

Looking through Kawasaki’s line-up, the majority of its bikes have now been revealed in ‘2019’ colours. Reading between the lines, it’s the ones that haven’t been updated yet that are most likely to get bigger changes for the new model year.

Most notably, bikes that still haven’t been given a 2019 makeover include the Ninja ZX-10R and both Kawasaki’s supercharged machines, the H2 and H2SX. There are rumours of substantial changes to the ZX-10R in 2019.

The Z900 is also still shown in 2018 form on Kawasaki’s website, suggesting there may be changes for the 2019 model year, and so is the Versys 1000, which we hear is due to get some big updates in the near future. 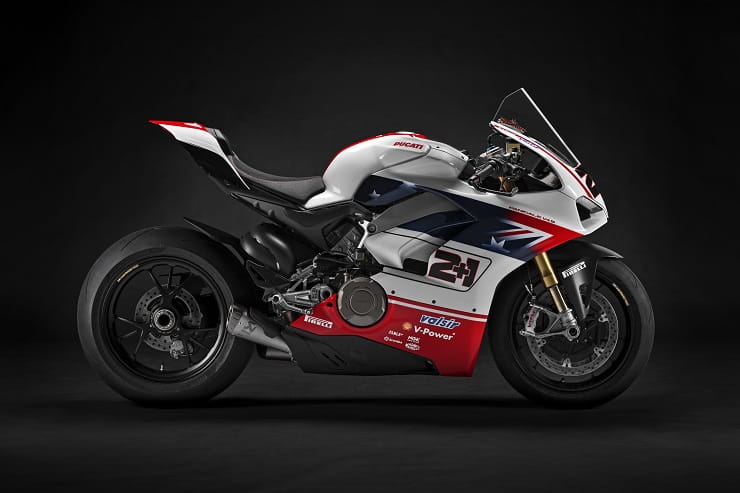 The 13 Ducati Panigale V4S machines prepared for the firm’s ‘Race of Champions’ at World Ducati Week all sold on eBay for figures well in excess of the cost of a normal Panigale V4S – but the bike that finished the race in last place was the most expensive by far.

If ever there’s been a clear illustration of the esteem that Troy Bayliss is held in by Ducati fans, the fact that his Panigale V4S was bid to an incredible €120,350 after 129 bids is it. That made it nearly twice as expensive as the next-most-expensive machine to have taken part in the race, the machine ridden by Andrea Dovizioso, which made €62,400. The other works GP-coloured machines of Lorenzo (€57,800) and Pirro (€50,050) came next. At the other end of the spectrum, you could have bagged Xavier Simeon’s machine for a mere €40,000, or Karel Abraham’s for €50 more. The bikes of Rabat and Rinaldi were also at the cheaper end. Melandri, Petrucci, Davies and Miller’s machines all slotted into the mid-€40,000s bracket.

The auction generated a total of 7,084 bids from all over the world, with some 1,516 people battling it out to option the thirteen bikes. The uniqueness of the event also aroused huge interest on social media: official Ducati profiles saw more than 7 million views between Instagram and Facebook.

The fondness and esteem that Ducatisti still nurture for Troy Bayliss, a true Ducati icon, three-times winner of the World SBK Championship and recently (at the age of 49) winner of a SBK race in Australia on a Ducati Panigale, are impressive. 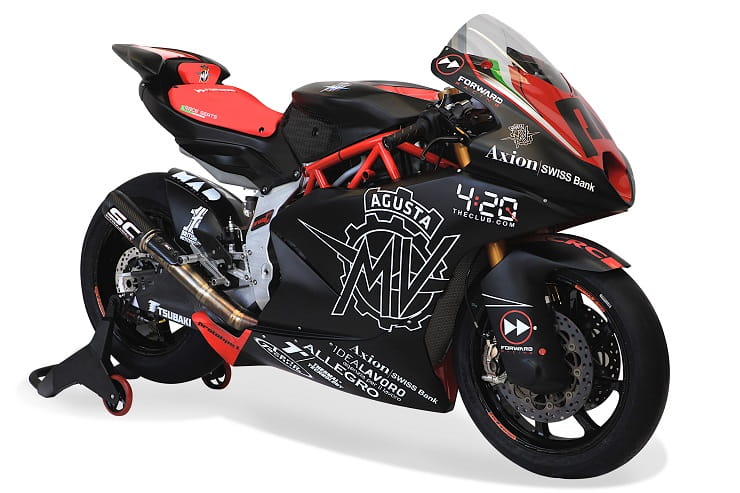 The MV that’s powered by Triumph

MV Agusta announced its plan to return to MotoGP with a factory-backed Moto2 bike in 2019 back in May and now it’s finally revealed the machine that will bear the brand’s name.

It’s been 42 years since the firm participated in the world championship, so for the new effort it’s teamed up with Swiss-based Forward Racing to develop a new machine to carry the standardised Triumph 765 triple that will power all next year’s Moto2 bikes.

The bike itself is quite a departure from the beam-framed, Honda-powered 2018 Suter that Forward is running this year. There’s a part-alloy, part-steel-trellis frame design, for a start, and of course the engine is completely different.

Here’s what the key men involved had to say:

Giovanni Castiglioni, MV president: “I am really proud to see the dream to rejoin the Motorcycling World Championship come true. I would like to thank all our engineers, technicians and designers, plus the staff of the Forward Racing Team for having carried out this project in such a short amount of time. I want to express my gratitude to Giovanni Cuzari, as he believed in us and pushed us to do our best. Of course there is still a lot of work ahead of us, but step by step we will improve our competitiveness.”

Giovanni Cuzari, team owner: “I have been chasing this dream since Claudio (Castiglioni’s) era. Many times I have insisted with Mv Agusta for a return in MotoGP, and, when Giovanni has taken the place of his father, I have often encouraged him to believe in such an ambitious project. Finally he did it, and today, 42 years later, we will take the first steps with the Moto2 MV Agusta prototype. I am very emotional but aware that this is only a first outing, and that there is a huge amount of work ahead of us. I got to know closely the Castiglioni Research Centre, the true heart of MV Agusta, and now I’m convinced that we have everything to accomplish a great prjoect: the passion and professionalism of the group guided by Paolo Bianchi, together with my fantastic team, which I thank individually, is definitely the right mix to be able to aim for the best. Today’s is a starting point to get to bring this brand back really high. A special thanks goes to all those who supported and support this project, now the attention goes to the track.”

Brian Gillen, project leader: “It’s a few years now that we are thinking about a return to the Motorcycling World Championship and with the modification of the regulations of the Moto2 category for 2019 it’s the perfect opportunity to express our technical know-how, that we developed during the last six years in which we raced in Superbike and Supersport.

“The Moto2 project is an ambitious one and we are involving our R&D resources and all our racing experience in order to develop a completely new bike, which differs from all the others and which reflects the values of MV Agusta.” 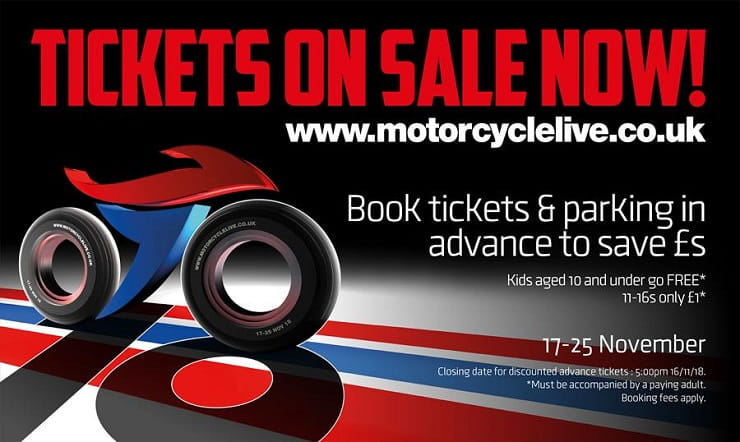 Motorcyle Live is only 3 ½ months away

November might still seem a long way off but tickets for Motorcycle Live at the NEC in Birmingham – which runs from 17-25 November – have just gone on sale.

As you’d expect, there’s money to be saved by booking early. Advance adult tickets are £19.50 rather than the £25 they’ll cost on the door. Under-10s are free and 11-16 year olds are only £1 (but must be with a paying adult). You can also save another £6 by booking parking in advance, if you’re taking a car. Bikes are free to park anyway.

There’s also an option of paying £25 for an advance ticket, which gets you an Oxford HD MAX disc lock worth £25 as well.

Harley-Davidson has dominated the news this week thanks to its radical plan to reinvent itself with a massive new range of products including adventure bikes, electric bikes, streetfighters and small-capacity machines as well as more traditional cruisers.

You can read all about that here, but over and above the official announcements, there’s more information on Harley’s upcoming new models to be found.

The firm’s video release shows glimpses of three additional models that aren’t mentioned in its plan.

The clearest is the FXDR, shown in fleeting glimpses in the video. We’ve dug up more information on this machine and can reveal that it’s based on the existing 1870cc ‘114’ version of the Milwaukee-Eight, air-cooled V-twin engine, making 91hp and a massive 114lbft of torque at a mere 3000rpm. In the blurred shots on the video it appears to be a single-seat design, with a small headlight and wind deflector at the front and a seat unit that’s reminiscent of the old V-Rod Muscle. An on-board image reveals a tiny digital dashboard and clip-on bars.

The FXDR name also hints that this bike could mark a return for the twin-shock ‘Dyna’ chassis. In traditional Harley terms, the first letter refers to the engine. ‘F’ means big V-twin. The second letter identifies the forks, with ‘X’ meaning small-diameter (‘L’ would mean fat forks). The third letter normally refers to the frame design, and in the past ‘D’ would mean a Dyna chassis, with two visible rear shocks. However, Harley ditched the Dyna frame last year, moving all its big twin bikes over to the Softail chassis design, which has a hidden rear shock to give the look of a hard tail.

The video also gives a glimpse of other future Harleys, showing the clay model of a faired sports bike inspired by the 1990s VR1000 racer. If it comes to fruition, it will be powered by the new DOHC, 975cc-1250cc water-cooled engine that will power the 2020 Pan America adventure bike line. Another clay model shown in the video, also featuring that engine, is a flat-tracker inspired by the classic XR750.