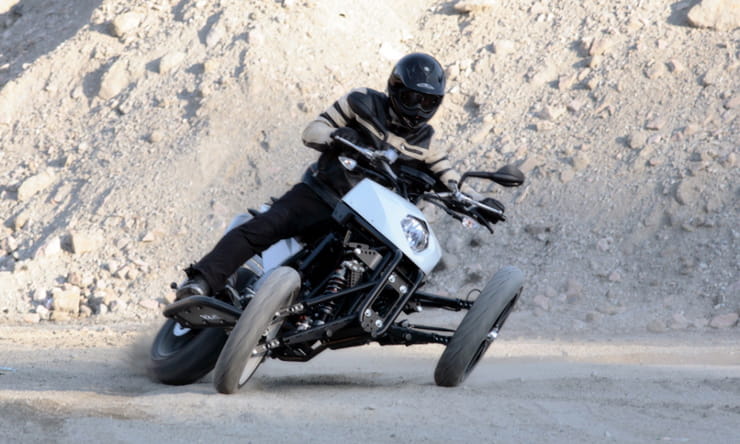 Yamaha revealed earlier this year that more derivatives of its new Niken leaning three-wheeler are on the way.

Shortly after we revealed that a new 250cc or 300cc parallel twin Niken derivative was in the works in February, the firm’s President and CEO Yoshihiro Hidaka confirmed that other leaning trikes were coming, saying: “Our company is working on various initiatives with the theme of the growing world of personal mobility in the current midterm plan. This is a product line up of LMW leaning multi-wheel. Since the launch of Tricity commuter in 2014 we continued R&D activities and in the last year’s Tokyo Motor Show we have presented large size sports model Niken, which will be launched in the market this year. Not just limited to these two models we will be expanding customer base with new values of LMW.”

But the latest patent application to be filed by Yamaha’s engineers reveals that as well as a smaller-capacity leaning trike, Yamaha has ideas for a bigger one. 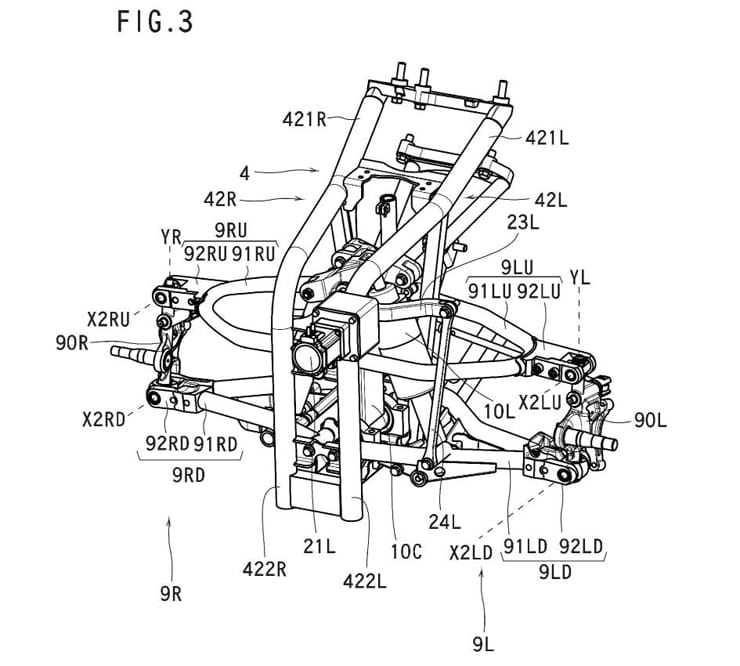 The patent application, published in Japan on 22nd March this year, was submitted in late 2016, when the Niken was already long-since green-lit.

But rather than showing another derivative of suspension system used by the Niken and the smaller Tricity scooter, which both use four conventional fork legs mounted in pairs to a parallelogram tilting mechanism that’s similar in concept to the Piaggio MP3’s, the new idea is based on a car-style wishbone suspension system.

The idea is that by putting the wishbones’ central mounting points at or near the centreline of the bike, you can create a machine that tilts its wheels and main body to the same angle with little or no restriction on how widely spaced the two front wheels are. A vertical tower section mounted at the fulcrum of the centre section’s tilt remains upright and provides an upper mounting point for the front suspension’s spring/damper units.

It’s not actually a radically new idea. The Harley-Davidson Penster project, which nearly reached production a decade ago before it was ditched, used a very similar set-up. But what’s interesting about Yamaha’s patent application is that the system has been applied to the biggest, butchest model that the firm could supply; the 1700cc, 200PS VMAX.

The decision to use the VMAX as the design’s basis tells us a couple of things. One is that this is an idea aimed at a whole new performance level compared to the Tricity or even the 115 horsepower Niken, which uses the MT-09’s three-cylinder engine.

The other is that we shouldn’t expect to see this bike appear in production, at least not in this form.

Yamaha ended production of the VMAX in Japan last year, and although there’s officially a 2018 version of the bike still on sale in America, it’s been dropped from both the Japanese and European markets. With production ended, the 2018 American bikes are presumably coming from stocks of existing machines.

That means if Yamaha is to introduce a VMAX-powered tilting trike, it will need to be based around a reworked and Euro4-legal version of the 1700cc V4 engine. 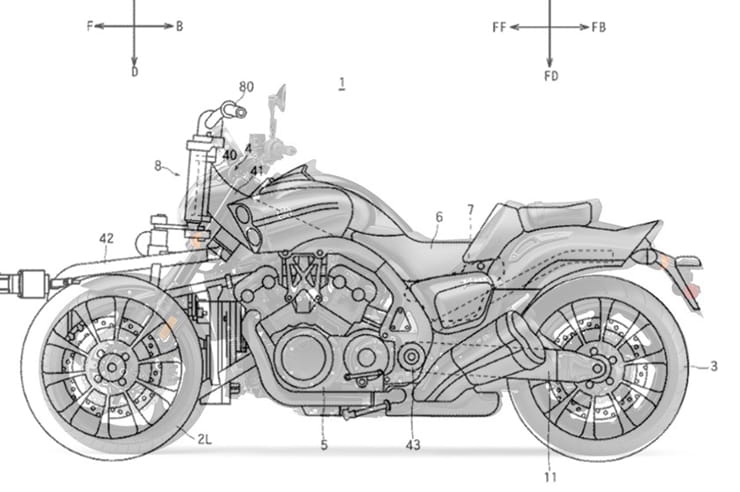 Given that the idea of a wishbone-style tilting three wheeler isn’t new, what exactly is Yamaha attempting to patent here? According to the Japanese text accompanying the patent application, it’s not the method of tilting or suspension, but a system to right the bike after it’s been leant over.

With weight clearly an issue on larger, higher-performance tilting three wheelers, the need for a device to help bring it back upright is increased. In this patent the system uses a hefty servo motor (marked ‘21L’ in the drawings) that’s connected to the bottom left wishbone via an L-shaped linkage. It assists the rider in hoicking the bike back up after it’s been tilted.

Variations on the idea are also shown in the patent, including an arrangement with two servos – one for each side – and one where the servo is mounted at the lower wishbone’s pivot point, eliminating the additional linkage.

The problem of righting a high-performance tilting trike using the wishbone suspension system is clearly one that’s preying on Yamaha at the moment, as since filing this patent application the company has bought the rights to patents from tilting trike firm Brudeli.

Brudeli, makers of the KTM-based 654L, launched in 2008, also uses a wishbone-based suspension system very similar to the one shown in the Yamaha patent. However, its own patent – which Yamaha now has rights to use – reveals how it alters the centre of gravity as the bike tilts, so it is encouraged to revert to an upright position. Basically, it uses the bike’s own weight to achieve much the same effect that Yamaha’s mechanical, servo-operated system shown here does.

That means Yamaha’s decision to buy Brudeli’s tech – which happened in December 2017, more than a year after the VMAX-based patent application was written – could have superseded the design seen here.

But while it might supersede the details of the design, the buying of Brudeli’s intellectual property adds weight to suspicions that a high-performance tilting Yamaha trike, using a wishbone-based suspension system, is on the way.

And it’s unlikely to be alone, as other firms – including Honda – are taking an increasing interest in the market. Honda’s 2015 NeoWing concept bike, as well as previewing elements of the 2018 Gold Wing, showed the firm’s own tilting trike system. It’s also filed several patents around an NC750 with a similar front end arrangement. And Kawasaki’s futuristic ‘J Concept’ from 2013 has also been subject to a spate of renewed publicity in recent weeks with the firm unexpectedly releasing a new video of the bike in January this year.

It looks like there could be a new battle brewing for the world’s biggest bike brands. Bring it on.