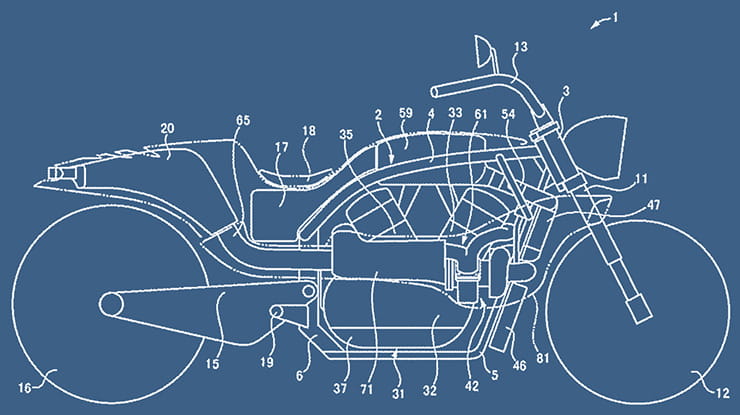 Suzuki is preparing to unleash a secret turbocharged V-twin cruiser that promises to put acceleration above all as it highlights the firm’s shift towards forced-induction bikes.

Over the last four years Suzuki has already established that it’s in the vanguard of a turbocharging revolution. Back in 2013 it revealed the Recursion concept bike, powered by a single-turbo, single-cam, 588cc parallel twin making 100hp. Two years later, in 2015, it whipped the covers off the XE7, a near-production twin-cam parallel twin engine, again with a turbo, which is widely expected to go on sale in a completely new sports bike next year.

But its latest plans are quite different. Both the Recursion and the XE7 engine that it spawned are intended to show the practical advantages of turbos. They’re relatively small-capacity designs aimed at offering a mix of performance, economy and environmental friendliness that a normally-aspirated engine couldn’t hope to achieve. With the turbocharged V-twin cruiser, Suzuki appears to be targeting headline-making acceleration and torque rather than appeasing environmentalists. 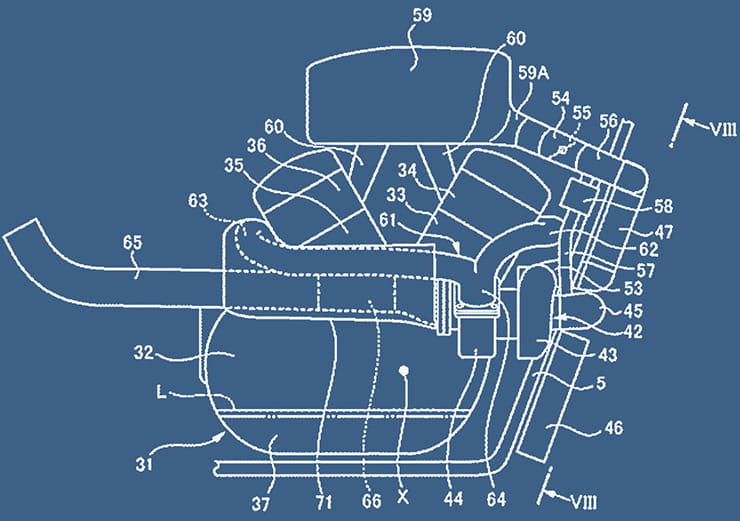 The Suzuki project is still secret but the firm has filed several patent applications in Japan that give us a good view of both the bike’s intentions and the technical solutions that the firm has hit upon to achieve them.

Rather than being an entirely new design, the underlying elements appear to be closely related to the existing M1800R. Should it reach production, the turbo cruiser is likely to be that bike’s replacement.

When the M1800R was launched back in 2006, its 1783cc, water-cooled V-twin helped it achieve 125hp at 6200rpm and a thumping 118lbft of torque at only 3200rpm. Those were class-leading figures at the time, but in recent years the market for drag-style cruisers has been transformed, first by Yamaha’s VMAX and then by the Ducati Diavel and XDiavel. The Yamaha – now out of production but with stocks still on sale in some countries – made nearly 200hp from its 1679cc V4. The Ducatis offer 152hp and, with relatively little weight, will out-accelerate and easily out-handle the older Japanese machines.

While we don’t know for certain that this is the same engine as the M1800R, the V-twin in the images appears to be of a similar size and design. Bolting a turbo to the M1800R’s 1783cc V-twin would up its power – potentially to 200hp-plus, depending on the level of boost – and massively increase torque to help make it the fastest quarter-mile machine out there. 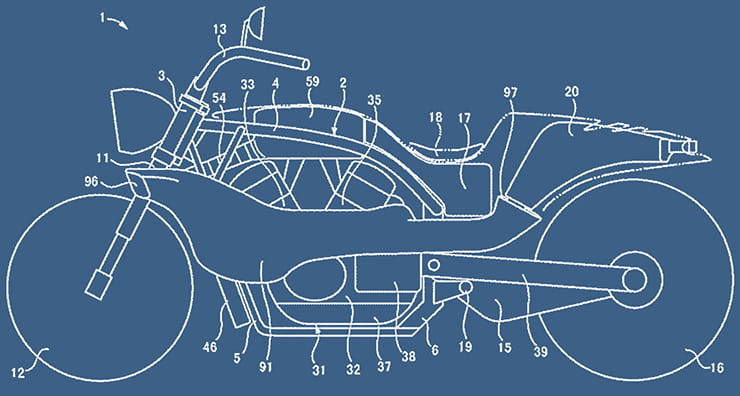 The engine is mounted in a perimeter frame that appears similar to the existing M1800R’s, and the patent specifies that, like the M1800R, it’s got a shaft final drive. The bodywork also shares distinct similarities to the existing bike, particularly in its hunched rear end.

But there the comparisons end. The clear addition is a huge single turbo, bolted to the right-hand side of the bike, parallel with the front of the engine. It’s fed from an air cleaner on the left-hand side via a large intake tune than runs horizontally across the front between the intercooler and the water radiator.

Exhaust headers from both cylinders feed into the turbo’s turbine section, while the front compressor half of the turbo sucks air from the air filter and then forces it through the intercooler to a pressurised plenum chamber above the engine. The fuel tank is moved down and backwards, stretching under the seat, to make space.

From the turbo, the spent exhaust gas runs straight backwards through a large exhaust pipe down the bike’s right hand side. It then tucks back in under the seat to a huge silencer and catalytic converter that virtually fills the entire area under that distinctive tail bodywork. It finally exits through a rectangular slot in the rear bodywork, between the tail lights.

Although that layout is largely dictated by the needs of the turbo, it also defines the bike’s styling. On each side, there’s a slab of bodywork that runs from the nose to the rear but remains quite separate from the bike’s tank or tail. Each side has an intake just ahead of the forks.

On the left, that intake feeds the air cleaner, on the right it goes to cool the turbo. Further back, the left-hand side panel is purely cosmetic, but the matching right hand one – with the aid of some hefty heat shielding – covers the turbo and the exhaust. It’s going to be a distinctive look, even if it’s not a conventionally attractive one.

While the fact that Suzuki has filed at least four patent applications in Japan to protect the bike’s engineering ideas, showing it’s a serious project, at the moment we don’t know how soon we can expect to see the finished creation or whether it’s destined to be a production machine or a mere concept.

However, while the bike promises wild performance it’s not as crazy as it might seem. Adding a turbo to the big twin could actually improve its emissions as well as its power, something that Kawasaki’s supercharged Ninja H2 achieves when compared to the ZX-10R.

While, if it reaches production, the bike could be the wildest forced-induction showroom machine yet, it’s not entirely unprecedented. Several aftermarket tuners have, over the years, turbocharged Suzuki’s M1800R to great effect using a very similar layout to the one seen in these official patent drawings.

Suzuki is sure to show the latest of its turbocharged bike developments at the Tokyo Motor Show in late October. It’s very likely that the final offspring of the Recursion and XE7 projects – shown at the last two Tokyo Motor Shows – will be the highlight of the Suzuki stand. Could this turbocharged M1800R replacement also be on display? Given the timing of the patents, it’s far from impossible.