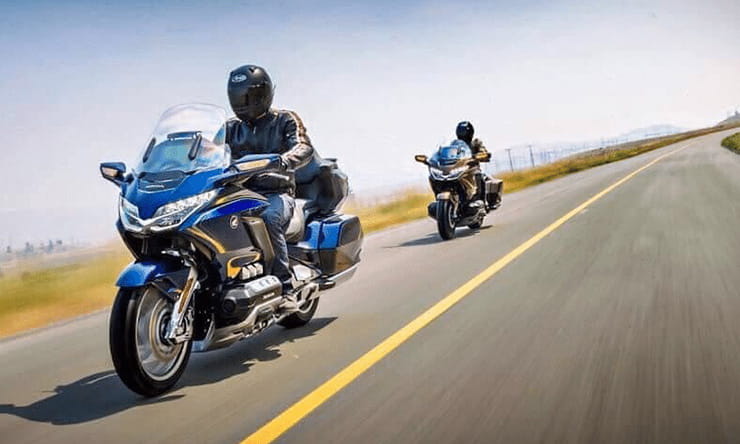 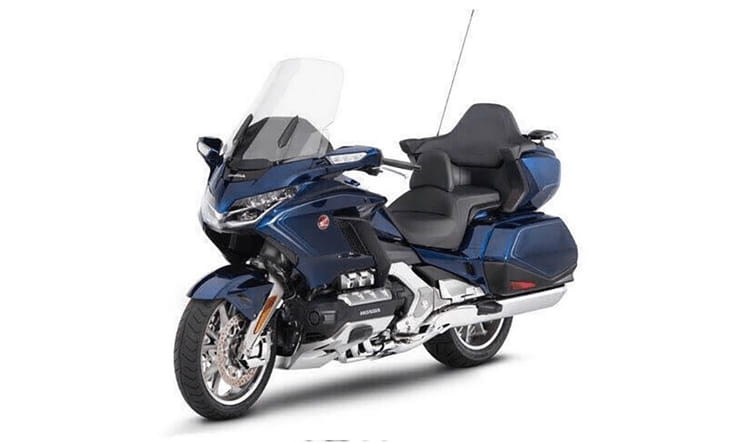 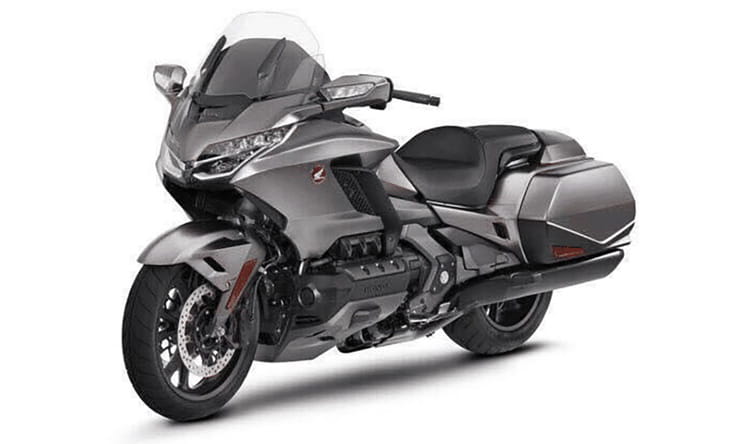 When Honda launches a new Gold Wing it’s a big deal. Although the model is 43 years old there have only been three two full revamps since its 1974 introduction. The third comes in a month’s time when Honda will reveal the first all-new Wing since 2001.

For some background, the Gold Wing started life as the GL1000 in 1974, derived from the firm’s 1972, flat-four-powered ‘M1’ prototype. It was Honda’s first flat-four engine, its first water-cooled bike and its first shaft-drive machine. It evolved gradually, growing to 1100cc in 1980 and then 1200cc in 1983. The 1980 Interstate model added the fairing and luggage that we now associate with all Wings – the original bike was a straightforward naked machine.

In 1987 the second-generation Wing appeared, with a new 1500cc flat-six engine and even more luxury. And in 2001 we got the 1800cc machine that lives on, with only minor tweaks, to this day. 16 years ago it was a technological wonder, but that was before our world was filled with touchscreens, smartphones, sat-navs and dozens of other things that have since become commonplace.

In a month’s time, at the end of October, Honda will pull the covers of a completely new fourth-generation Gold Wing, which aims to reclaim the position as the world’s most high-tech motorcycle… 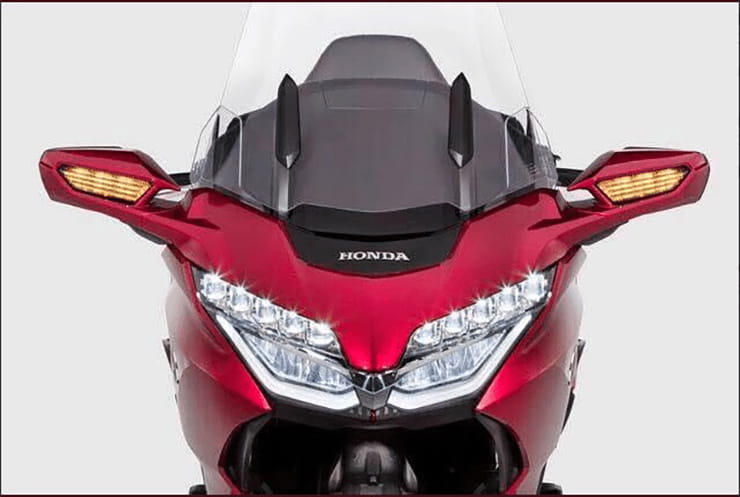 The new Goldwing looks to be a natural evolution of the designs we’re used to seeing.

Let’s start with the powertrain. From the leaked pictures of the new Gold Wing we know that Honda is sticking with the flat-six layout that it pioneered back in the late 1980s, and we don’t think that the firm is aiming for a big increase in capacity this time around. It’s going to stay around the 1800cc mark.

But the engine has gained plenty of modern technology. Much of it will be on the electronics side, with ride-by-wire throttles – six of them, rather than the twin throttle bodies of the current bike – and probably the most high-tech gearbox yet seen on a production bike.

A patent filed by Honda two years ago reveals the expected innards of the new ’box. It’s a development of the DCT (dual-clutch transmission) system that first appeared nearly a decade ago on the VFR1200F, but it’s got no fewer than seven forwards speeds and a reverse. It’s a two-gear step-up for the Wing, which currently has a five-speed box. 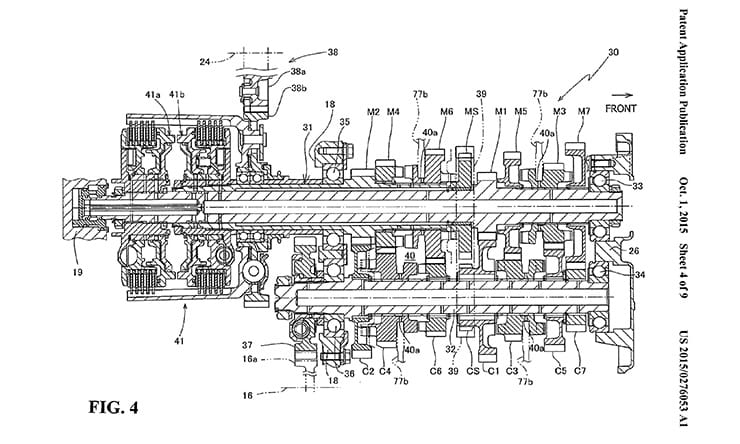 Here’s the 7-speed DTC. The gears are numbered M1-M7 on the two-piece main shaft and C1-C7 on the counter shaft. The reverse gears (marked MS and CS) are connected by a chain, so the output shaft spins the other direction when it’s selected

Like the DCT boxes in the VFR1200F, VFR1200X and Honda’s NC750 range, the Gold Wing’s uses a main shaft that’s split into two pieces, each with a clutch of its own. The first main shaft is half-length and hollow, while the second is full-length and runs inside the other one, allowing both clutches to be mounted next to each other at one end.

On the Gold Wing patent, 1st, 3rd, 5th and 7th gears, plus reverse, are mounted on the longer, inner main shaft, while 2nd, 4th and 6th are on the shorter, hollow main shaft. They mesh with gears on a fairly conventional counter shaft, which in turn drives the bike’s final drive shaft.

The twin-clutch arrangement and two-piece main shaft means that at any time, two gears are engaged simultaneously. When you’re in 1st, with the first clutch engaged 2nd will already be in position, but with the second clutch disengaged – so to shift from 1st to 2nd it’s just a case of disengaging one clutch and engaging the other. Since the bike will know it’s accelerating, it will then automatically put 3rd gear at the ready, and so on. The computer is mapped to know which gear you’re likely to want next, reacting to throttle position, acceleration and braking to make its judgement.

Adding a 7th speed to the transmission is simple – it just means it’s a fraction longer. Reverse uses a chain to connect the main shaft and counter shaft instead of meshing cogs, so when its engaged the two shafts spin in the same direction instead of counter-rotating. That reverses the direction of the final drive shaft as well. Previous Goldwings – as far back as the 1500cc version – have had reverse gears, but they’ve been driven by the starter motor rather than the engine.

We know from the leaked Gold Wing pictures that the DCT will be an optional extra. Some images show bikes with a conventional shift lever and clutch on the bars, while others show the clutch lever and the gear pedal missing entirely. Given the advanced electronics and the Gold Wing’s touring orientation, it’s virtually certain that the DCT model will have a fully-automatic mode, with the option of shifting using thumb buttons if you want more control. 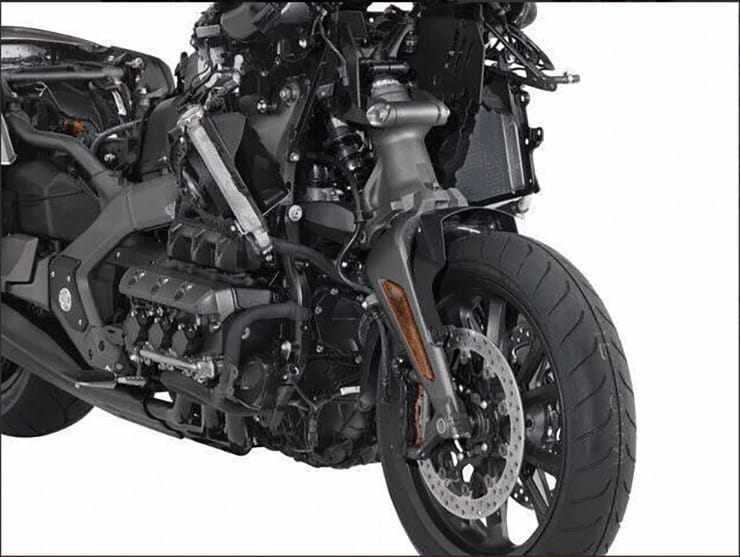 Front suspension looks much like BMW’s Duolever arrangement, but works a bit differently

While the leaked Gold Wing pictures can’t show much of the bike’s under-the-skin tech, there’s no hiding the oddball front suspension. It dispenses with telescopic forks in favour of a massive cast aluminium girder suspended on a pair of wishbones with a single coil-over shock doing the springing and damping.

Many have already pointed out that the design is similar to BMW’s Duolever system, as used on the K1600GT and GTL, and previously on the K1200 and K1300 models. But to say the systems are the same would be underselling the amount of work Honda has put in.

BMW’s Duolever is basically the system developed decades ago by Norman Hossack. It’s got V-shaped upper and lower suspension wishbones pointing forwards from the frame, each with a ball joint at the front ‘point’ of the V that connects to the aluminium girder fork. The ball joints allow the fork to steer. A two-piece steering linkage connects the bars to the fork, absorbing suspension movement while giving steering control to the rider.

Honda’s thinking is similar, but its solution is quite different.

Instead of V-shaped wishbones and ball-joints, Honda has used a cast aluminium tube, rather like a conventional bike’s headstock, mounted on H-shaped wishbones. The forks have a steering stem running through this tube, with head bearings like a normal bike’s providing the ability to steer.

The bars, mounted on a pivot further back, are connected to the steering by two links – one on each side. This system might be able to further eliminate the possibility of slop in the steering linkage, proving more subtle feedback to the rider. 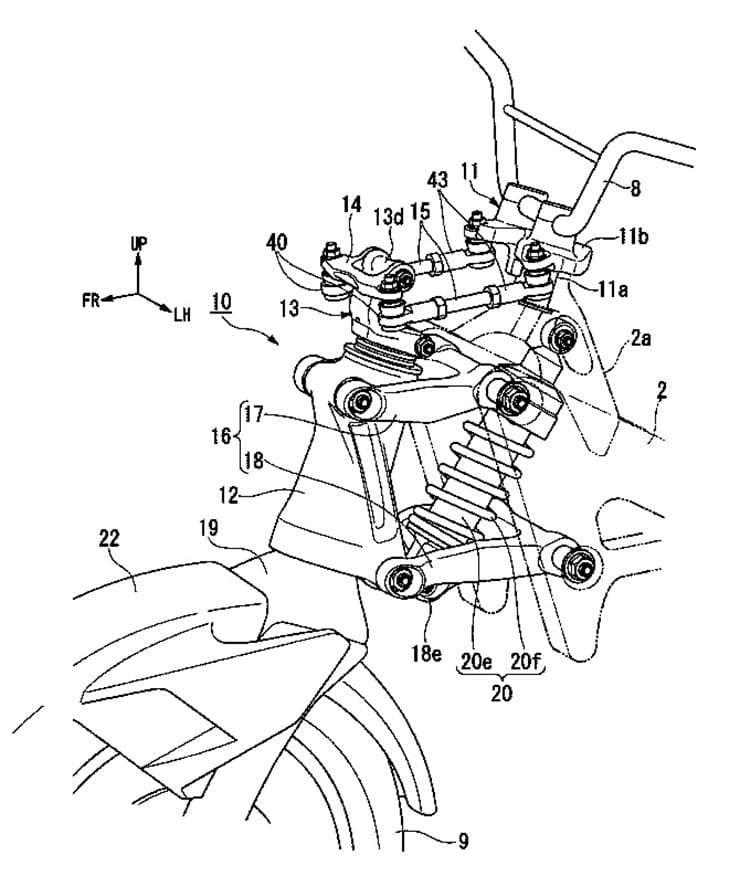 Why opt for a system like this instead of conventional telescopic forks? Honda’s reasoning is probably the same as BMW’s; it can separate suspension and braking forces much more effectively – potentially endowing a very heavy bike with handling of a much smaller, lighter machine.

Telescopic forks are well proven, but their limits are also well known. They transfer enormous forces – particularly under braking – through a convoluted path into the bike’s chassis. The enormous forces involved in stopping a big, heavy bike like the Gold Wing provide a particular challenge. All that stopping force needs to go up the forks – which are inevitably a bit flexible and which in turn put a huge amount of leverage onto the headstock. That means the frame needs to be reinforced at the steering head, making it even heavier. A Hossack-style system allows much more rigid forks to be used, eliminating flex under braking, and braking forces are transferred to the frame lower down, via the bottom wishbone, which hugely reduces the leverage effect of the forks.

And because the forks themselves no longer need to be circular-section tubes, they can be designed to be more rigid in a fore-and-aft direction while retaining a bit of lateral flex to improve cornering grip.

A collateral advantage of the system is that it uses a monoshock, rather like the rear of a normal bike. That makes the adoption of semi-active suspension potentially easier – and surely the Gold Wing will be fitted with a system like that. 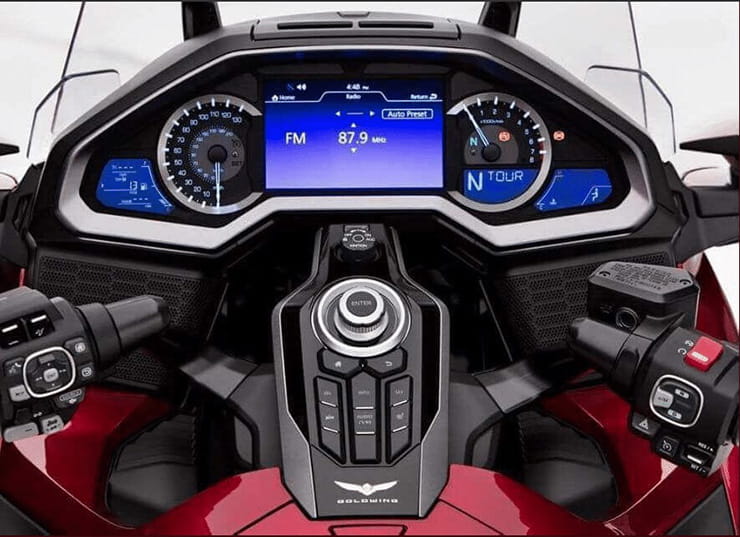 Count the buttons. The Gold Wing’s high-tech dash gives a clue to its technology

Infotainment is a word that barely even existed when the current Gold Wing was developed, but now people expect to seamlessly integrate their smartphones with their cars. The Gold Wing has always adopted car-style tech, so will do something similar.

Can we expect to see Android Auto or Apple CarPlay on the Wing? It’s possible, and the bike’s huge display screens – four LCD panels plus two conventional clocks – give scope for more entertainment, navigation and communication options than we’ve ever seen on a bike before.

Each bar has a host of controls. The left hand bar alone has some 16 thumb buttons, and there are probably trigger controls for your forefinger as well.  Among them will be the DCT gear shift, controls for riding modes and probably semi-active suspension modes.

The central control panel is largely related to audio and phone controls, plus the heated seats, while a joystick-style knob above them will be used to navigate the main screen – it’s more sensible than a touchscreen, given the difficulty of accurately using such devices with gloved hands.

The new Gold Wing is sure to set several records and firsts for motorcycles, and from the look of the dashboard we’d be surprised if one of them isn’t a record for the thickest user manual ever supplied with a bike… 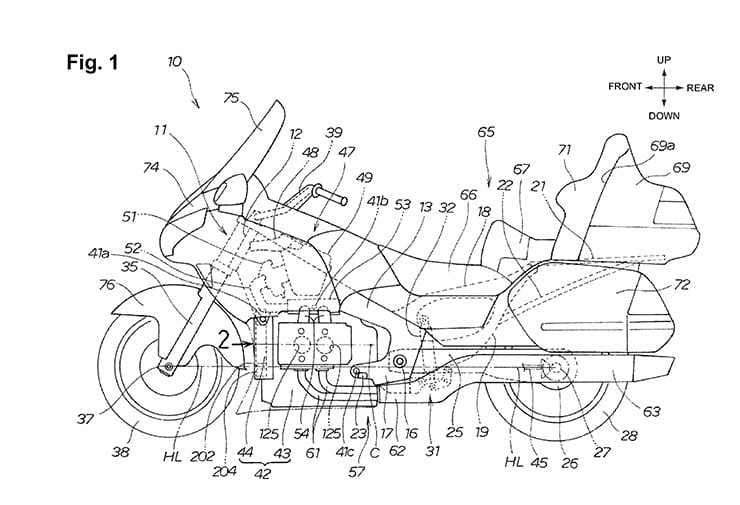 Could Honda have a hybrid-powered Gold Wing in the future? Don’t bet against it.

While the leaked pictures prove the new Gold Wing is still a flat-six-powered machine, Honda has also been developing a hybrid electric version using a smaller, 1200cc flat-four and a large electric motor.

The image above shows Honda’s patent for the idea. The four-cylinder engine is clearly visible and ahead of it there’s an electric motor (marked ‘43’ on the drawing). The motor is connected straight to the engine’s crankshaft, acting as a generator when the bike doesn’t need extra power. On opening the throttle wide, though, the electric motor would kick in, adding a huge dollop of torque and power.

The system makes a lot of sense on the Gold Wing. By making the bike more economical, it would extend its tank range significantly as well as cutting costs for the owner.

Honda’s 2015 NeoWing concept three-wheeler showed the hybrid four-cylinder engine mounted on a bike, and it’s notable that its castings were visually very similar to the new six-cylinder engine in the 2018 Gold Wing, adding fuel to the idea that Honda is just a step away from offering a hybrid, 1200cc four as an optional alternative to the usual 1800cc six.