Official: Kawasaki take the covers off the Z900RS CAFE | EICMA 2017 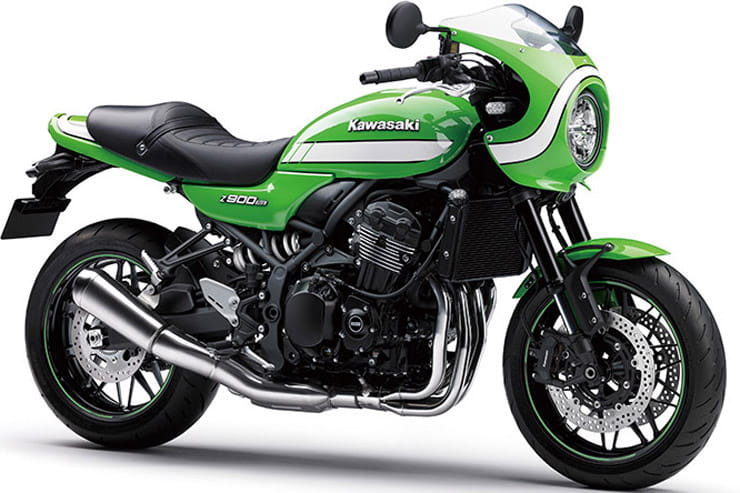 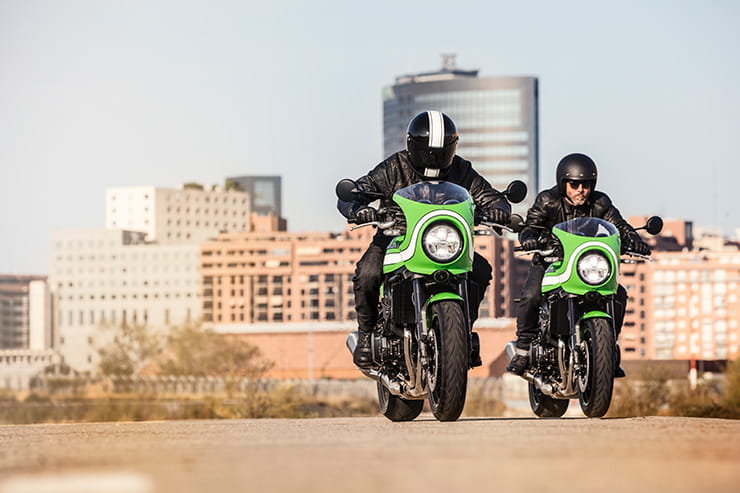 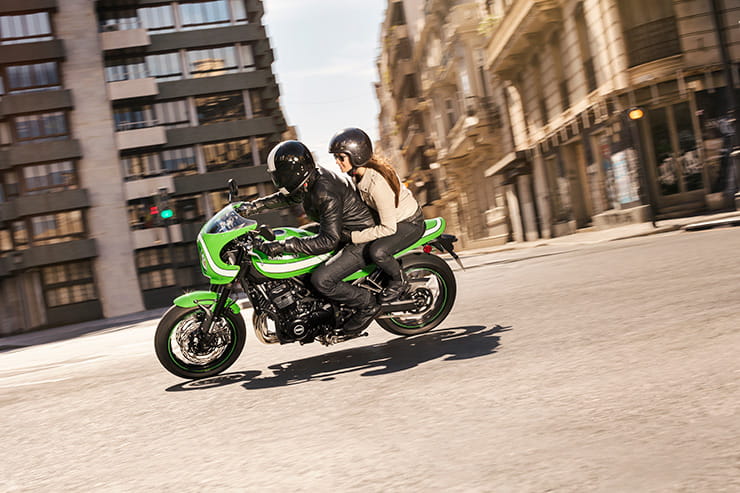 Just a couple of weeks ago Kawasaki whipped the covers off its much-teased new Z900RS but it’s already added a second model to the burgeoning retro range in the form of the Z900RS CAFE.

The name alone probably tells you what to expect. The CAFE (Kawasaki styles the title in shouty block capitals) is mechanically the same as the Z900 but gets a full complement of café racer kit. Bullet fairing? Here. Humped-seat? Check. Dropped bars? Well, sort of. But given the back-breaking discomfort associated with riding a truly authentic café racer we can forgive the decision to only lower the bars a little in comparison to the normal Z900.

To recap on the mechanical aspect, shared with the stock Z900RS, the new bike is basically a tweaked, re-bodied, retuned version of the existing Z900. That machine’s aggressive, modern styling is binned in favour of shapes borrowed directly from the 1972 Kawasaki Z1, while the stance and riding position are shifted to alter its geometry and feel. 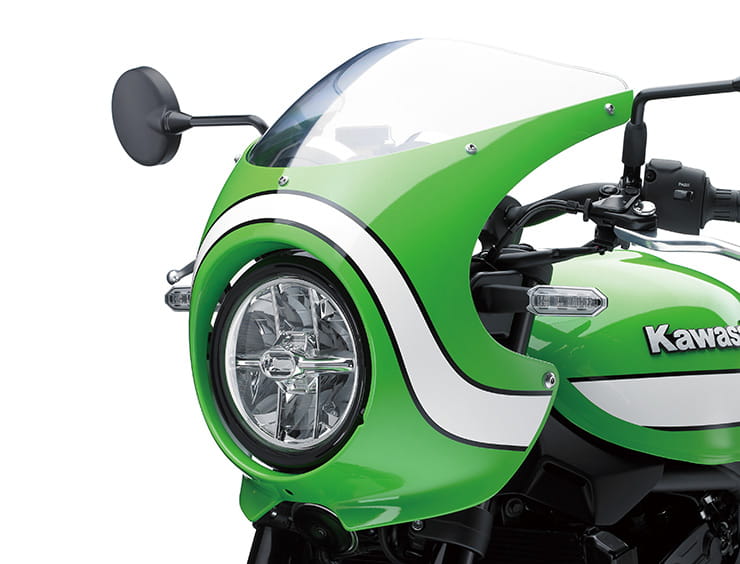 The engine is basically the Z900’s 948cc four, retuned to give a little less power – 110hp rather than 123hp, peaking 1000rpm lower at 8500rpm. It breathes through a new exhaust, culminating in a single end can. That’s at odds with the Z1 inspiration – a true replica would have four silencers – but Kawasaki claims the pipe has been tuned to give the perfect exhaust note.

The Z900-derived engine is bolted to a similar steel trellis frame, but compared to the Z900, the Z900RS has been raised at the front and lowered at the rear, softening the steering angle. That would normally lead to slower steering, but to compensate there’s a new upper triple clamp with more offset, reducing trail from 103mm to 98mm and making for lighter, quicker steering.  The frame also has redesigned upper rails to allow for the slimmer Z1-style tank, while the rear subframe is different to suit the retro, duckbill seat unit.

Suspension-wise, the forks are 41mm upside-downers adjustable for compression and rebound damping as well as preload. The rear monoshock is rebound and preload adjustable. Brakes are an upgrade over the Z900, with radial-mount front calipers and a radial master cylinder. There’s ABS, of course, and also a two-mode traction control system. 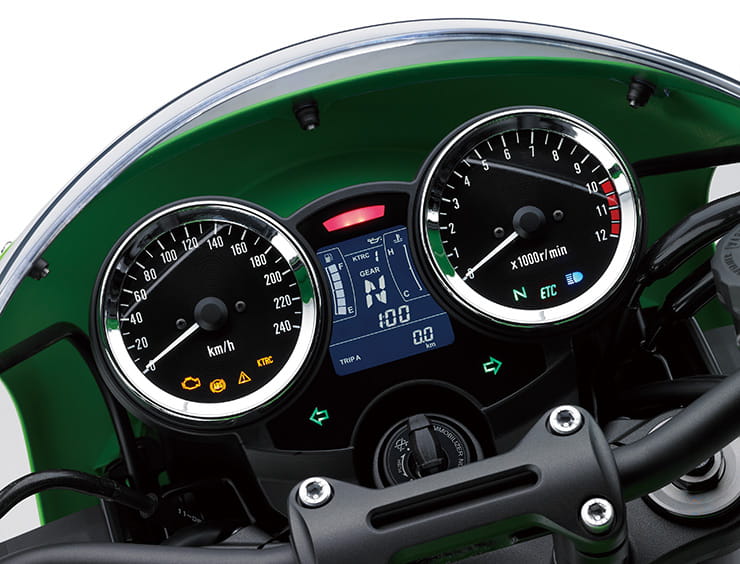 The Z900RS CAFE may be technically identical to the Z900RS it’s based on but the reshaped seat and lowered bars will make it feel noticeably different. Not to mention the nose fairing; despite being small it will surely give a reduction in wind blast compared to the naked version.

That fairing carries the same LED headlight as the normal Z900RS, and in traditional style the whole lot turns with the steering rather than being solidly mounted to the bike.

Other CAFE-exclusive elements include the green paintwork with white stripes, harking back to the firm’s 1970s race bikes.

Morihiro Ikoma, Director of Kawasaki Motors Europe, said: “We were delighted at the worldwide acclaim for the Z900RS when it was launched just a few weeks ago. The Z900RS CAFE widens the appeal of the new RS offering and personifies the True Spirit model tag line. Kawasaki took its time to enter the modern classic scene but the wait was worthwhile. The Z900RS CAFE and Z900RS have a unique heritage and an authenticity that sets them apart as the genuine article.”

We’ll still have to wait to discover the price, but with dealers expecting the first Z900RSes in late November it won’t be long before it’s announced. With the basic Z900 listing at £8249 the RS shouldn’t be ridiculously expensive. 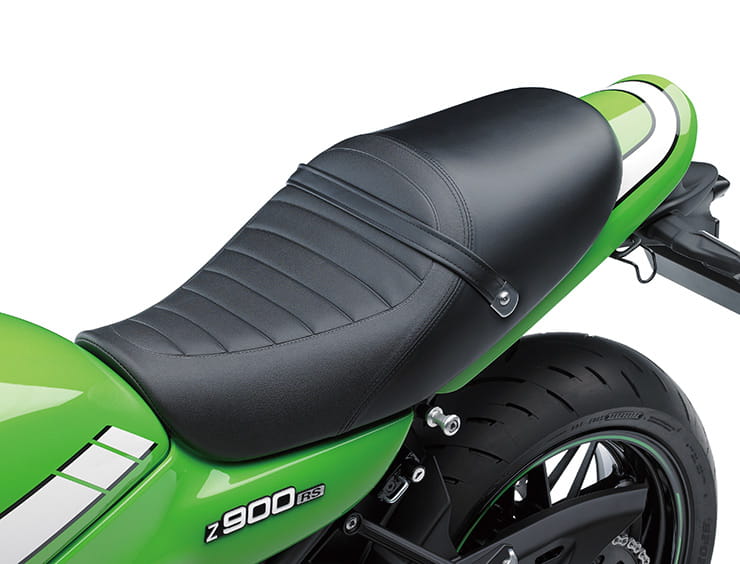