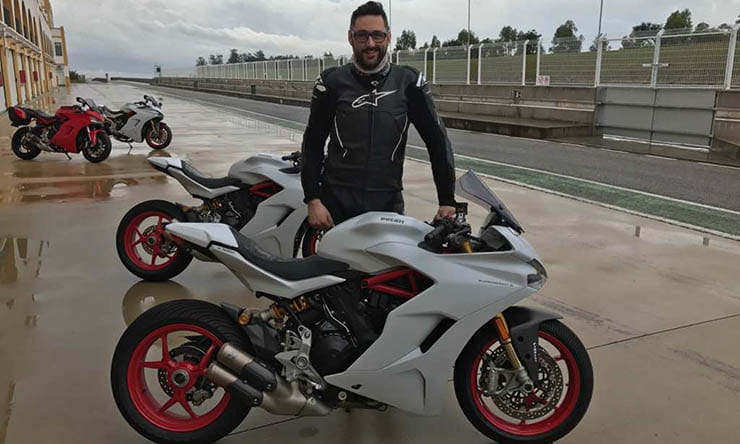 Ducati’s SuperSport S tries to answer the prayers of riders looking for a sporty Ducati, but one that’s usable every day, more comfortable, friendlier, and not so full-on as a 157bhp Ducati 959 sports bike. So could this be the best real-world Ducati sports bike? Our man Marc Potter is at the world launch in Spain today to find out. Here’s his first impressions...

Remember the Ducati 916? Yeah, me too. The day I rocked up to MCN as a cub reporter there was one tinking and ticking as it cooled down outside the office. It was, and probably still is the most iconic sports bike ever made.

Yet when I looked at the Ducati SuperSport’s 113bhp claim, I was amazed to find out it’s making just 1bhp less than the original Ducati 916!

A couple of facts for you: almost a quarter of a century ago, back in 1994, that classic motorcycle known as the 916 changed the world of sports bikes forever. It made a claimed 114bhp and weighed in at 195kg, you don’t need me to tell you it was widely regarded as the most radical sports bike of its day. A legend in fact.

Jump forward to 2017 and Ducati’s new SuperSport makes a claimed 113bhp and weighs in at 210kg kerb weight, and this is Ducati’s entry-level super sports bike. Incredible that a ‘softer’ option sports bike now makes the same power as the king almost 25 years ago. But it also shows how perceptions change.

The new Ducati SuperSport, unveiled back in November by Ducati CEO Claudio Domenicali, was one of the most talked about bikes at the Milan Motorcycle Show, and is the rebirth of the famous 900SS and 750SS of the Nineties and Naughties.

The new bike features a 937cc, liquid-cooled Testastretta motor that is now used across the range in the Hypermotard, Hyperstrada, Multistrada 950 and now the new Ducati SuperSport and SuperSport S we’re testing here.

It’s designed as a sports bike, rather than a mental, some might say, impractical hyper sports bike. But it still has plenty of kit to make sure it handles well, yet combines a low seat height of 815mm with a screen adjustable for height by 50mm for covering a bit more distance than you might want to on a Panigale, perhaps. It’s a hell of a lot cheaper than a Panigale too, the standard bike costs £10,995.

The SuperSport S also gets a single seat cover. On the gearbox side, the S features a quick shift system with down blipper for clutchless gear changes up and down.

That’s a feature normally used on higher-end Ducati’s like the Multistrada S and 1299 Panigale S, hence why it’s on the £12,295 ‘S’. So, the new Supersport is certainly well equipped.

We’ve ridden the SuperSport S around the wet Monteblanco circuit this morning and are impressed so far. It’s been pouring here and the bike has been fitted with Pirelli wets, so while it’s not totally representative of the road, it has helped us find some grip.

The bike is incredibly agile and easy to handle and what the wet conditions really demonstrate are the brakes, which were very powerful in hauling us down from an indicated 225 kph at the end of the straight. Suspension is from Ohlins, and it feels very plush. Ducati have set the bike up slightly softer for the wet conditions, so it feels more like you would ride on the road. It feels like a Ducati sport bike for the road, one that you can ride every day. The wind protection feels good and the traction control is very subtle. The engine feels very smooth and we’re looking forward to riding the bike on the road, hopefully in dry conditions, later today.