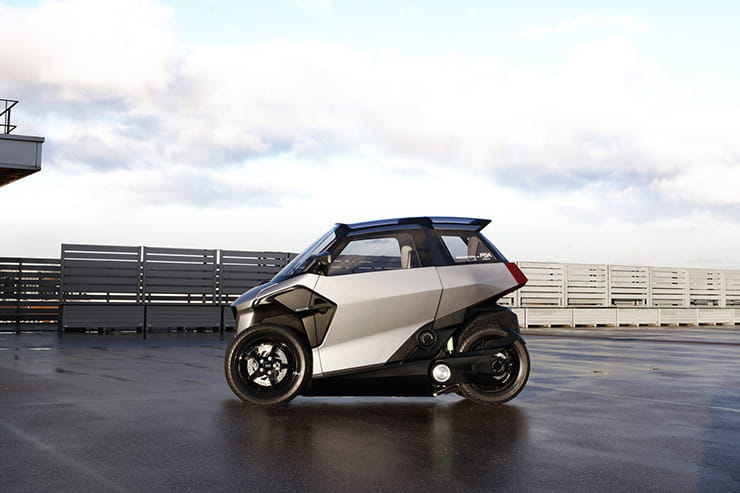 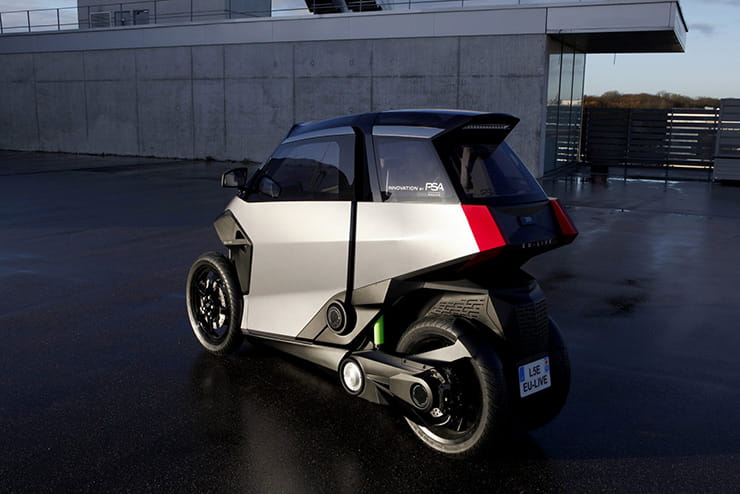 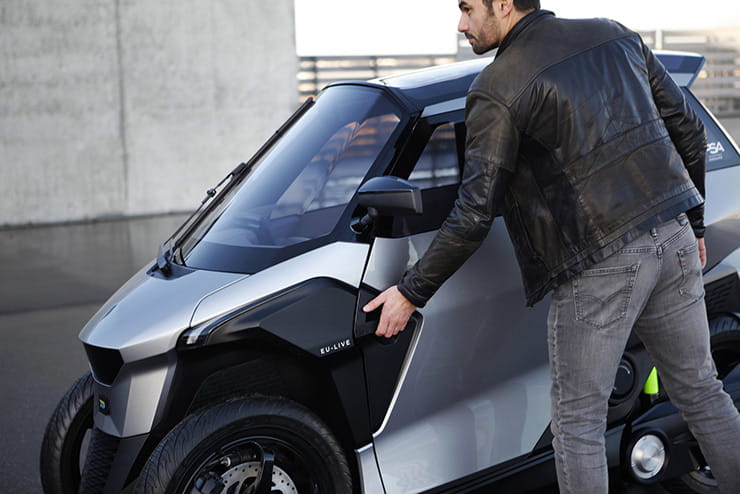 What’s your reaction on seeing the vehicle pictured here? Some will scoff and dismiss it as the offspring of an unholy union between a golf cart and a scooter. Others might be intrigued. After all, it’s clearly not a conventional car but neither is it quite a motorcycle under any conventional definition of the term.

However, it could be the missing link that starts to see a transition away from the heavy, unwieldy and space-inefficient cars used by the majority of the population and towards motorcycles. It’s more fun, more space-efficient and more economical than a car while providing a level of safety and weather protection that no bike can muster.

It’s actually the spawn of a consortium with a €6.7 million grant from the European Union’s ‘Horizon 2020’ research and innovation programme and going under the title EU-LIVE. That stands for Efficient Urban Light VEhicles. Peugeot’s scooter brand – owned by Mahinda and the PSA Group – is part of the project, along with its parent PSA, owner of Peugeot’s car brand as well as Citroen, Opel and Vauxhall. The consortium also includes automotive supplier Continental, electronics giant Samsung and brake firm Brembo, among others.

While the project began in 2015, this prototype – developed by the PSA Group and Peugeot scooters – is the most tangible result so far. 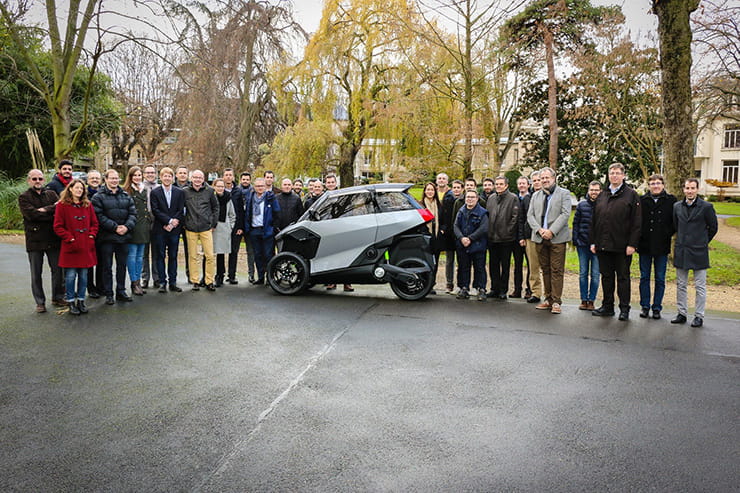 No, not quite. The difference here is that the EU-LIVE consortium is actively pushing for the development of what it dryly calls ‘L-category vehicles’ as the ultimate solution to urban transport needs.

In more familiar terms, ‘L-category vehicles’ are basically motorcycles. Under European type-approval rules, the ‘L’ category is split over several classes. We’re most familiar with L3e (motorcycles) but there are a host of others. For instance, L1e is mopeds under 50cc and capable of less than 25km/h. L2e is three-wheeled mopeds. L4e is sidecars over 50cc.

But the one that EU-LIVE is targeting is L5e, a fast-growing class of three wheelers. It’s actually defined as being for tricycles with a kerb weight under 1000kg, but the key element is that since 2013 a motorcycle licence – either a full ‘category A’ or an ‘A1’ (up to 125cc) one will do – to ride/drive an L5e vehicle. That means, to all intents and purposes, they’re bikes.

In fact the L5e class is a real oddball. Before the 19th January 2013, you needed a car licence (category B or B1) to use L5e vehicles, and if you got your licence before then, that’s still the case. But anyone who gained their licence since the 2013 changeover date needs a bike entitlement to use them.

In the past, most vehicles falling into the class were the sort of home-built trike concoctions that are usually ridden by blokes with names like ‘Bodge’ or ‘Animal’ who look like they’ve wandered out of an Ogri comic. Facial hair of the decidedly non-hipster variety and oil so deep under their fingernails that it’s entered their bloodstream. But today it’s a class that’s increasingly being turned to as a potential transport solution of the future. 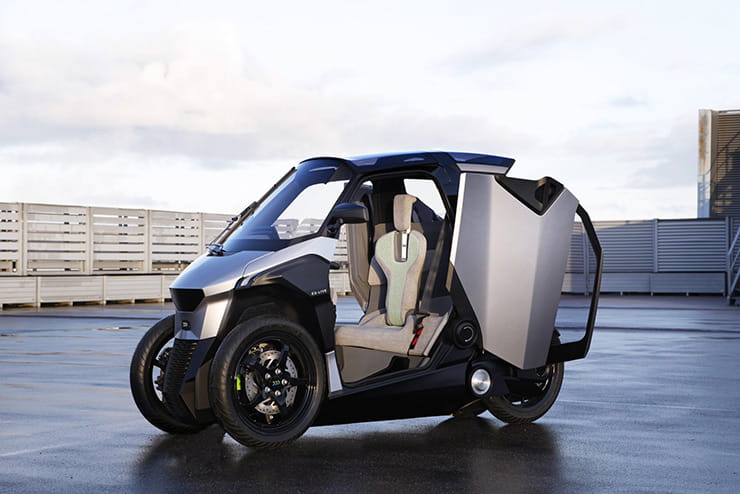 Groupe PSA says that while the project has ‘urban’ transport at its heart the prototype is good for all roads, up to and including motorways. Despite needing a motorcycle licence and falling into a ‘tricycle’ vehicle class, it’s actually got four wheels. Despite that, it still leans around like a bike. That’s what makes it look like such fun.

There’s a computer-controlled tilting mechanism, subject to more than half a dozen patents, under the skin, and hydropneumatic suspension of the sort that Citroen cars were once famous for.

Below 70km/h (43mph) it’s an electric vehicle, running on two motors mounted in the rear wheel hubs. Brembo was partly behind those motors. A 48-volt battery from Samsung provides the power.

Above 70kmh and up to the 80mph top speed a Peugeot single-cylinder scooter engine with 41hp (probably the 400cc one from the Metropolis) takes over. The resulting combination gives the benefits of both zero-emissions, plug-in-rechargeable  tech and a 300km (186 mile) range with instant refuelling from the petrol engine when needed.

The EU-LIVE prototype might look big, but it’s actually not much larger than a touring bike. At 2400mm long and 850mm wide it’s shorter and narrower than the new Honda Gold Wing. It’s a tandem two-seater but unlike a bike, it’s got a roof, doors, crash structure, seat belts (no need for helmets here) and an airbag. Its makers haven’t revealed the weight, but it’s got to be under 1000kg to qualify as an L5e vehicle, and presumably comes in well below that figure. 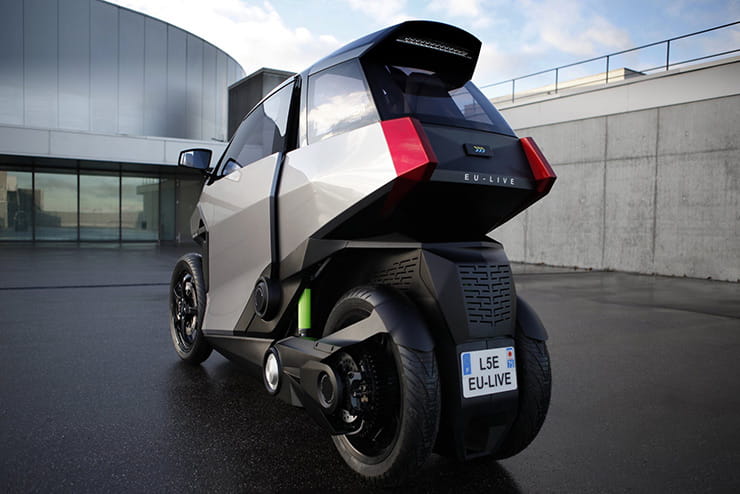 So is it going into production?

At the moment, it’s a prototype. But the consortium of big-name companies behind the project say that their intention is to develop a range of powertrains that can be used in various L-category vehicles – presumably even more traditional motorcycles. By making the power units common across multiple bikes they say that they’ll achieve economies of scale to bring prices down. That sounds a lot like the beginnings of a production plan to us.

Even if it’s too slow, to car-like to spark the motorcyclist in you, the fact that major automotive industry players are looking towards the ‘L’ category – where motorcycle licences are needed – rather than conventional cars to meet the transport needs of the future can only be a boon for motorcycling as a whole.