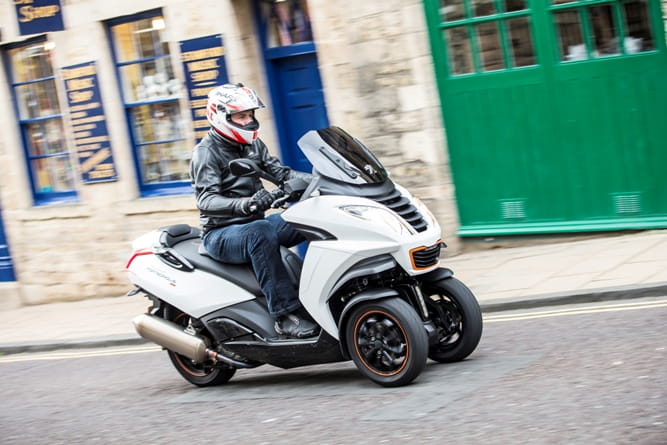 Last year Peugeot spotted an opportunity to immerse themselves into the quirky world of the three-wheeled twist and go scooter market which has been dominated by Piaggio’s MP3 range, especially in France, Peugeot’s home-ground.

So they built the Metropolis with a liquid cooled 400cc motor, perching itself in between the Piaggio’s 300cc and 500cc options and went on a marketing offensive. Despite the competition, Piaggio were happy because Peugeot were ploughing money into promoting the alternative mode of transport which resulted in higher sales for them.

These three models plus Gilera’s Fuoco 500 all have their twin front wheels set wide enough apart to be classed as a tricycle meaning that they can be ridden with just a car licence in your wallet so long as it was passed before 19th January 2013 and you are over 21. Otherwise, you’ll need an A2 licence. 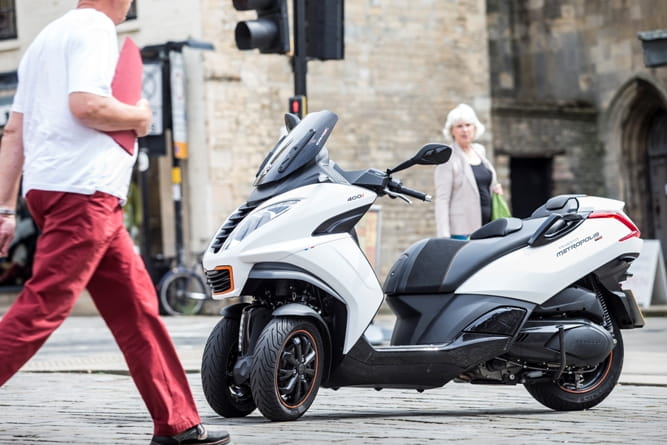 These contraptions are designed to be an alternative mode of transport to a car instead of a direct competitor to your two-wheeled versions. The idea is to tempt those who have concerns about stability especially in changeable conditions or over dubious road surfaces. Peugeot claim that it’s ‘virtually impossible to fall off’ and as far as we’re concerned, that translates as a challenge. In fact, by the end of the test and we're convinced that you can fall off but the bike, sorry trike, won't fall over.

We spent a couple of weeks testing the Metropolis and deliberately put the RS model through its 35bhp paces in town, doing some filtering, along B-roads, A-roads and dual carriageways. And fair play, the versatility of the bike is good – it’s not designed for some of those habitats but it didn’t disgrace itself.

The now-common party trick with tricycle scooters is a locking mechanism for the front wheels. They tilt allowing maximum grip but as you come to a halt just flick the switch on the right-side handlebar and they electronically lock so you don’t have to put your feet down. Open the throttle releases the lock too. On an incline? No problem, there’s a handbrake too. 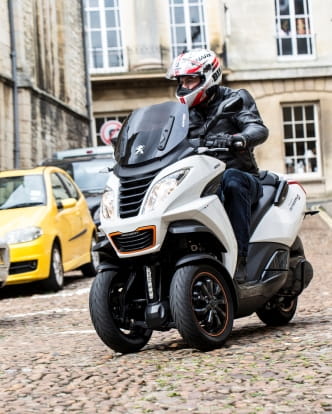 The three brakes are linked and are operated together from either the left hand lever or the foot brake (a legal requirement for tricycles) while the right-hand lever operates just the front two brakes. There’s no ABS but under braking, even with a pillion, it’s stable enough but I expected more. I didn’t trust the Peugeot’s grip or braking stability as much as I thought I was going to. That said, any diesel spills or wet leaves are much less of an issue for a scooter with an extra wheel at the front.

The 400cc motor delivers enough torque and a relevant amount of punch to get you off the line with enough pace to embarrass many more powerful bikes. The CVT transmission is smooth and the exhaust note keeps others around you alert.

The Metropolis comes with an adjustable screen and backrest on the rider’s seat, keyless ignition, an illuminated boot large enough for a full face helmet as well as under seat storage which is also where you’ll find the fuel filler. Other useful equipment includes a lockable glove compartment, a further cubby hole with 12v power socket and the vertical daylights situated in between the two front wheels are bright, sometimes too bright for night time on-coming traffic. We rode the RS version which is an extra £200 for some cosmetic enhancements but it looks neat, has been styled well and will turn heads down your local high street because of its quirkiness.

This is not a bike, sorry trike, which is aimed at the experienced rider who is confident in all weather. OK, we didn’t fall off but you don’t have to push it too far before your begin to question its stability. In fairness its lean angle of 39 degrees, whilst some way off Marquez territory is decent for some aggressive cornering but this is a machine designed for the likes of Rome, Paris and London probably hence its name. It has the benefits of a scooter with extra storage room, stability and at 775mm wide is 50mm narrower than a Suzuki Burgman 400. 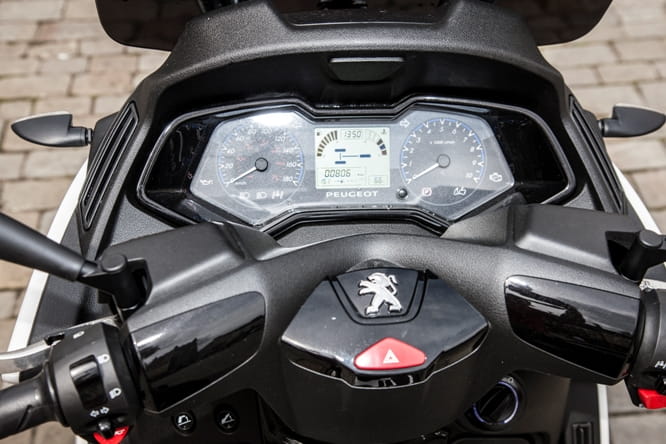 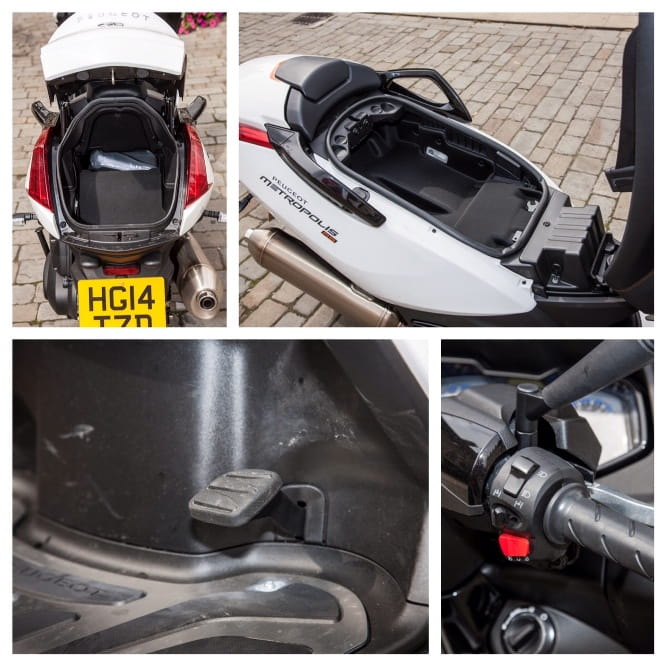 Overall, it's performance cannot be knocked but it should be far more confidence-inspiring than it is. Europe might be flooded with three-wheeled scooters but it appears as though the UK hasn't grasped the benefits yet. The Metropolis has many interesting quirks but it's for those transferring from four wheels not from two. It shouldn't just remain in the city but I suspect that's where it will stay.

Have you ridden a three-wheeled scooter?  or  to leave a comment!