VIDEO: Honda tease new Fireblade as one of six new models for 2017 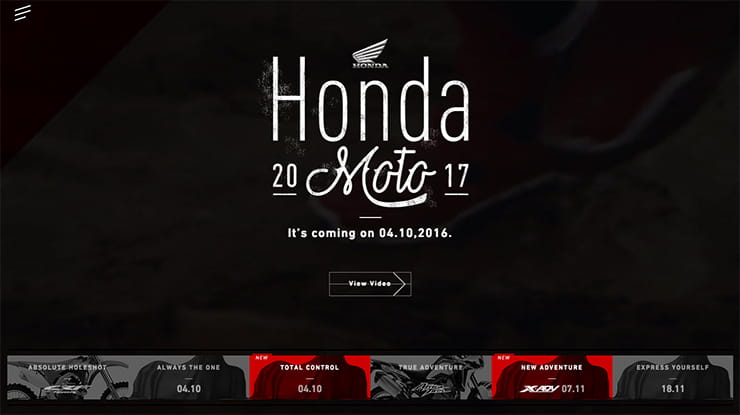 Honda has lifted the lid - just a little - on their 2017 line-up including a teaser video of the new Fireblade on track as part of their 2017 line-up that sees six either new or updated models joining the fleet, all of which will be formally announced within the next two months.

The headline grabber of the six is most certainly the updated CBR1000RR and, as revealed right here at Bike Social back in April, Honda’s superbike will retain its renowned silhouette while making “a lot more power” and ultimately being Euro 4 compliant. First images and details of the new bike were bought to the public eye last week in a series of spy photographs taken during the recording of the below video at Grobnik racetrack in northern Croatia.

The Firebalde keeps its inline four-cylinder engine as opposed to the much rumoured V4 version. Although we have learned that ‘Big H’ will come to the sportsbike market with a V4 in 2020 which also happens to be is when the Euro 5 regulations are introduced.

Honda has confirmed that the official announcement of the bike will take place at the Cologne-based Intermot motorcycle trade show on Tuesday 4th October, and of course we will be there to bring you all the details.

What Honda has provided in the meantime, via a preview of their new “global communication website”, hondamotoglobal.com, is two new teaser videos – one of which shows the ‘blade on track (above) while the other features six riders in very different riding attire in the moments leading up to them swinging a leg over their respective bikes.

From the clues on the website and the safety clothing worn by the six characters in the pre-release tease we can narrow down the style of 2017 model each is destined to ride. The race circuit scene with a rider in full Alpinestars racing leathers relates to the Firebalde while the orange Fox off-road kit and motocross helmet belongs to the CRF450R rider. Four other riders are depicted including a rather dapper looking gent in his tuxedo as well as a city scene featuring a rider in jeans, black jacket, brown satchel and clear-visored helmet. An open face black and white retro-designed lid belonging to a denim wearer plus a desert scene with a khaki-trouser clad man provide further clues to what Honda may have up its sleeve.

The new Honda website alludes to an Africa Twin update set to be announced at the Italian trade show, EICMA, on 7th November with enhancements to its sensationally popular CRF1000L model released only earlier this year. That said, when we spoke to the project's Chief Engineer, Mr Iizuka, last year he told us that a smaller capacity version “is a very real possibility”. Remember, like the Fireblade news, you heard it here first.

One further model of the 2017 line-up we do know of is the X-ADV, an adventure scooter confirmed only last week said to be powered by a DCT semi-automatic 54bhp 745cc parallel-twin. The same engine that can be found in the NC750X and Integra models.

So, Honda’s 2017 line up announcements will come at Intermot (Cologne, Germany) on 4th October, followed by EICMA 2016 (Milan, Italy) on 7th November and finally at IMS Long Beach (California, USA) on 18th November and along with their code names, look like this: