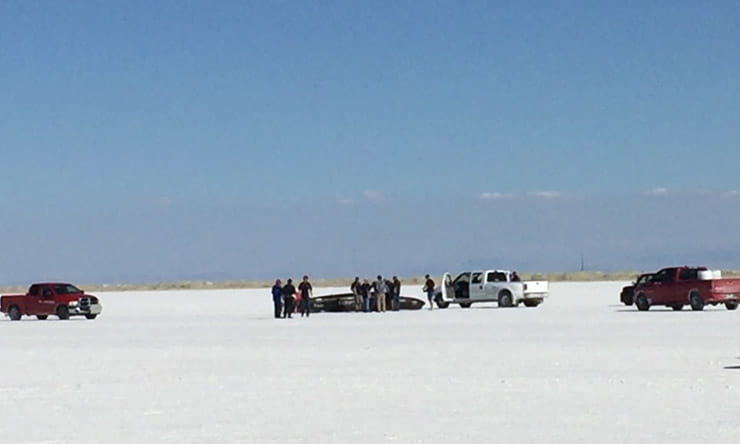 Guy Martin's chances of setting the world land speed record for motorcycles appears to have been cut short after he toppled over in the Triumph Infor Streamliner at Bonneville Salt Flats moments ago. Guy got out of the streamliner and said: "Let's still do it!"

After leaving on a tow rope behind a truck to make his way down the 11-mile Bonneville Speedway course, Guy appeared to have hit a soft bit of track and toppled over in the £1 million pound Triumph Infor Streamliner on his way down to the start line of the course. There is no major damage and Guy Martin is fine.

Bike Social's Marc Potter is at Bonneville he said: "I was heading down the course to witness Guy's attempt in a van, but by the time we got to Guy Martin he was out of the streamliner and walking back down the course somewhere around two-miles from the top of the course. The team had the streamliner back on its wheels in seconds and from a distance Guy appeared to be fine."

Triumph say that the streamliner hit some rough ground while being towed and toppled over.

The world land speed record of 376.363mph is currently held by Team Ack Attack, a record that Triumph and Guy are hoping to claim following a successful shakedown run in August where the team set a new Triumph record at 274.2mph.

The Triumph streamliner is notoriously hard to balance and uses two joysticks to steer the bike and balance it properly off the training wheels. Some salt flat racers in streamliners can take months to get used to the system. Guy learnt it within an hour when he first rode the streamliner back in August.

More as we get it.