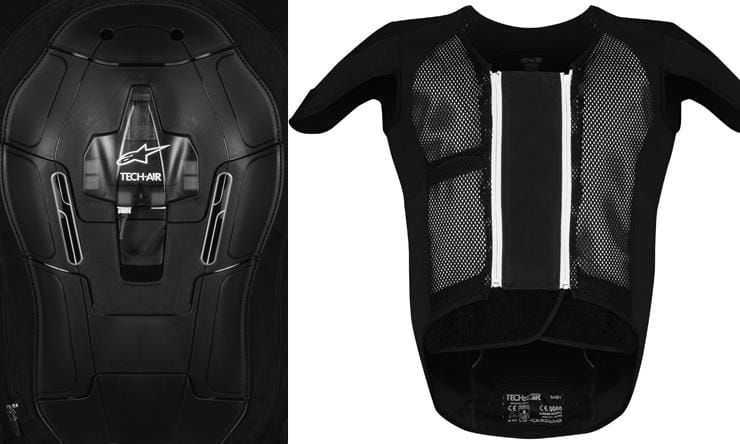 While airbag suits have been under development in MotoGP for the past few years and have recently gone on sale to the public, Alpinestars claims that the benefit of their new product is that it doesn’t need external GPS sensors or a direct connection to the motorcycle, instead using built-in software algorithms to detect crashes and inflate the airbags within 45 milliseconds. The suit has two settings, covering road and track riding.

Tech-Air Race System has been specifically designed to work with Alpinestars’ top end GP Pro Leather Suit, to which it connects quickly and uses the suit’s in-built LED lights to clearly see that the airbag is activated. It comprises of a tight-fitting lycra and mesh vest with built in back protector, with strategically placed airbags covering the back, shoulders, kidneys and chest.

Another unique feature is a dual charge system, which means that the suit doesn’t have to be reset or recharged after going off once, meaning that the wearer would be protected in the case of a second incident. The in built battery has a life of 25 hours between charges and can be recharged through a micro USB connection in six hours.

In addition to the race version designed to work with the GP Pro suit, Alpinestars has also introduced the Tech-Air Street for road orientated applications. This features the same technology but calibrated for road riding. Tech-Air Street is compatible with the male and female versions of the Valparaiso Drystar textile jackets and the Viper leather jacket.