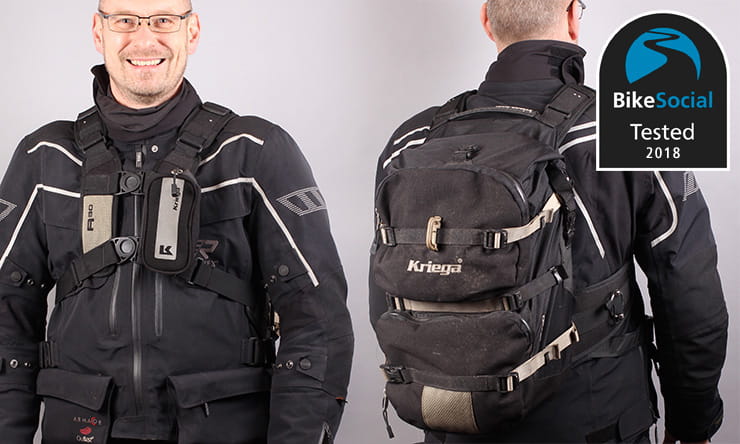 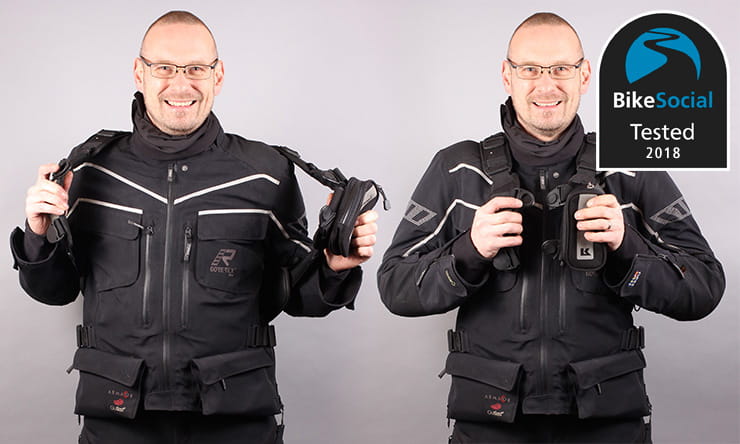 Those new to Kriega might baulk at the relatively high price of the R30, but having used one daily for more than three years, and riding across Europe, I can honestly say it’s worth every penny…

It’s the little touches that really stand out, from the strap retaining clips, the extremely tough carry handle (I know of an injured journalist who was dragged out of trouble by someone using the handle on his R30), the heavily padded mesh back panel and the reinforced buckle mounts, to the distinctive trademark Quadloc harness (more on that in a moment).

I’ve used this in all weathers, every day, and while it’s due a wash, it’s not worn, frayed or damaged in any way 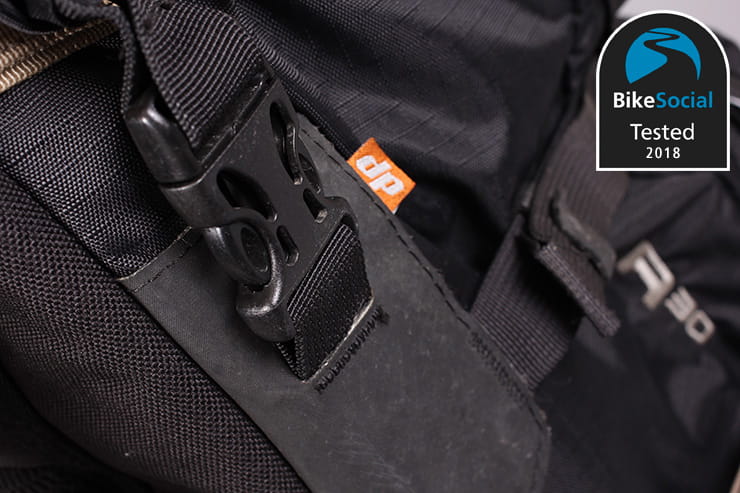 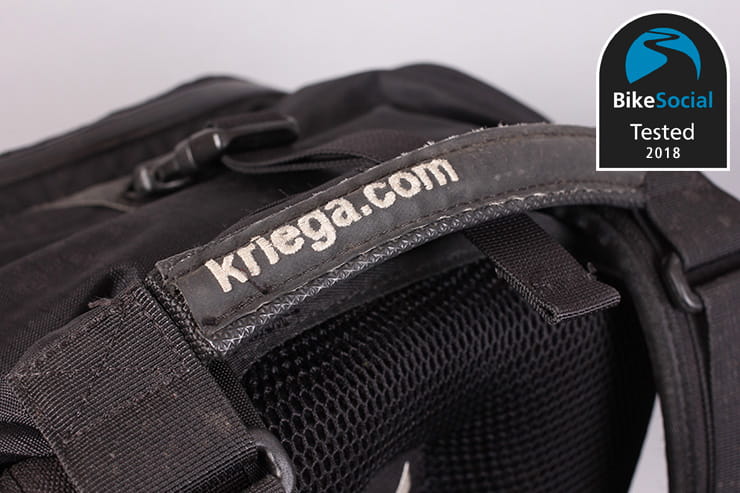 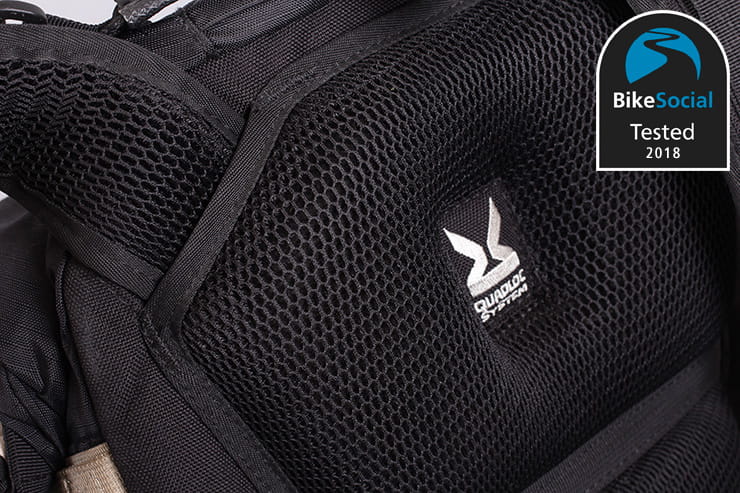 The 30 litre capacity is more than enough, with the large, totally-waterproof main pocket having room for a 17” laptop and plenty of other kit. I’ve used it for plenty of weekends away, but I usually have my 15” laptop in there (in the Kriega Kube laptop sleeve that I bought for a trip a couple of years ago), my lunch, headphones, notebooks, video camera kit and a pair of jeans to change into after riding.

Two further pockets on the front have water-resistant zips, but aren’t 100% waterproof. They’re each big enough for gloves or any other kit you need to cram in – I often have my camera in there (unless it’s pouring with rain), to make it quickly accessible. 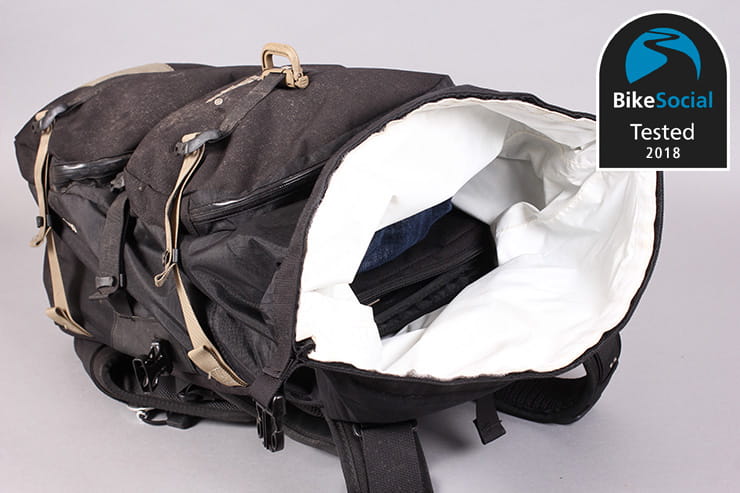 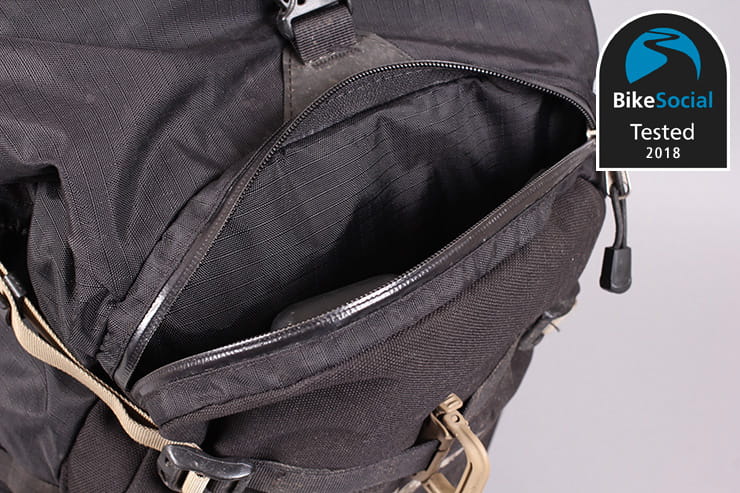 Having ridden to Luxembourg and back with more than 10kg in this pack, I can tell you that the Quadloc harness system – which secures across your chest – really does work. The idea is that the load is moved from the tops of your shoulders, as is the case with the average rucksack, to your shoulder and chest area.

Take ten minutes to get it set up correctly when you first buy the pack, and you’re unlikely to ever need to touch it again – once the main top straps are adjusted (which is easy thanks to the clear dots that ensure you get equal lengths on either side), and the waist harness is pulled in with the quick and simple alloy buckles, the pack is set. When you put it on or take it off, there’s no need to loosen anything as the harness opens wide, making it quick to swing on over the bulkiest of waterproof kit or leathers – I’ve used it with everything from my RST one-piece leathers to fully-laminated textiles with thermal liners and heated vest.

You do need to have it reasonably snug, and while the harness does a superb job of keeping you comfortable over thousands of miles, you’re slightly aware of it if you start panting. To be fair, this is a pack for carrying a lot over a long distance, not necessarily for riding off road or on track, but having done both with it, if I get really out of breath, gasping in deep lungfuls of air can feel a touch more restricted. 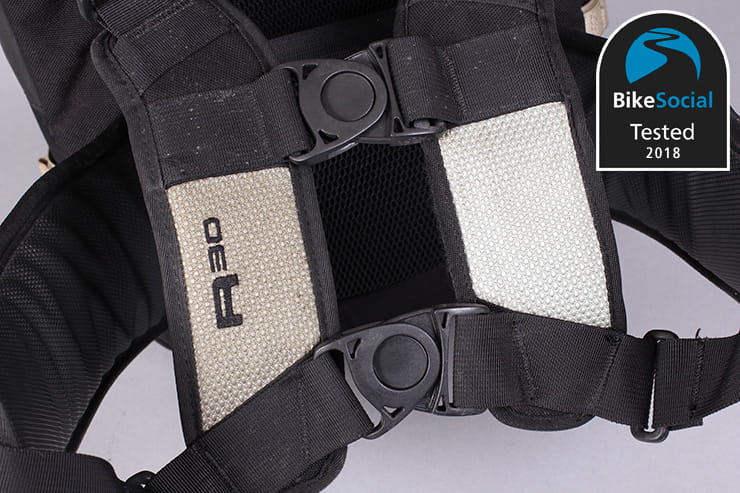 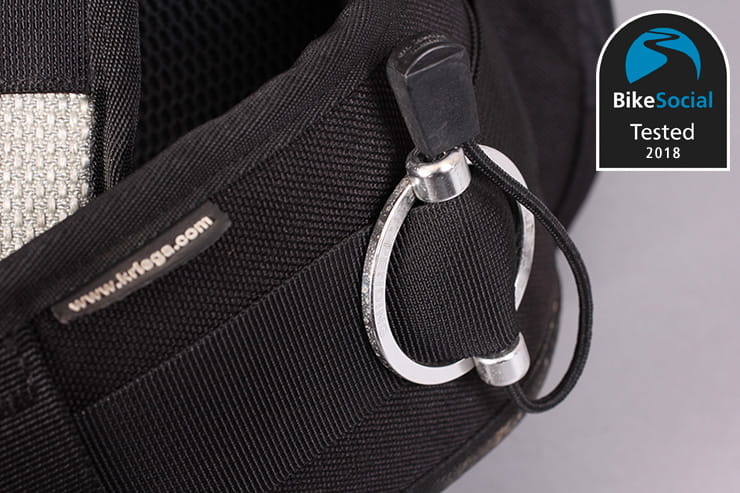 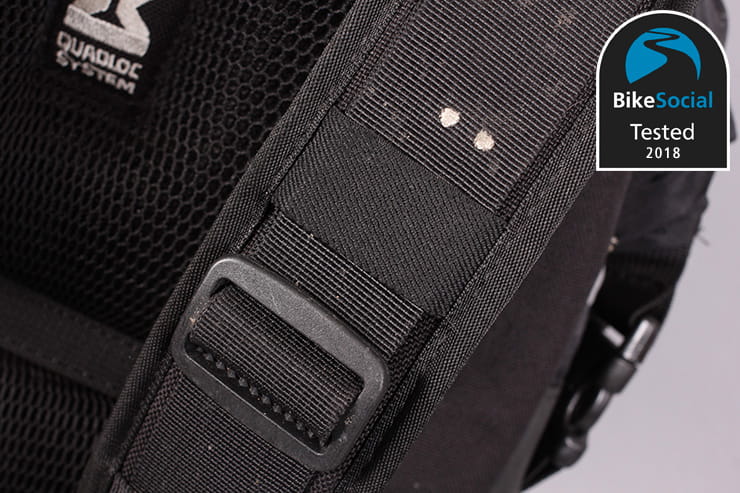 The main compartment has a roll top to fully seal it, along with a buckle for added security against high wind. Brilliantly, the white liner (easier to find your stuff in the bottom) is held in with Velcro around the top, so can be removed for cleaning, or in case you damage it – mine’s still completely fine.

The tough, light-coloured panels on the front and rear are reflective, and it’s possible to clip on a Kriega US10 or US5 pack for even more capacity, and there’s also a CE Level 2 back protector insert that you can fit for £49, though I have one in my leathers and textiles, so haven’t bothered.

One extra I did buy for this was the £22.50 Harness Pocket, which straps onto the front of any of the Kriega harnesses, waist pack or messenger bags (I’ve also used it on my R15 – the first piece of Kriega kit I bought, and which made me realise how good this stuff really is). This has enough space for my mobile, passport and péage tickets, so is really useful on rides across France and Spain. The way I have it positioned means it sometimes knocks against the chin of my lid if I look down, but it doesn’t bother me. Without this optional extra, the harness only just touches your chin if you’re looking directly down while riding an upright bike.

However much you carry, it’s quick and easy to use the six compression straps to pull the bag tight over your kit to prevent flapping. And of course, those straps are secured in their own neat retainers, though my only slight gripe with the R30’s design is that the lower strap sits above the start of the bottom outside pocket’s zip, meaning you need to unclip the strap to get inside. On most packs, you wouldn’t notice, but with everything else so well thought out, it’s more conspicuous. 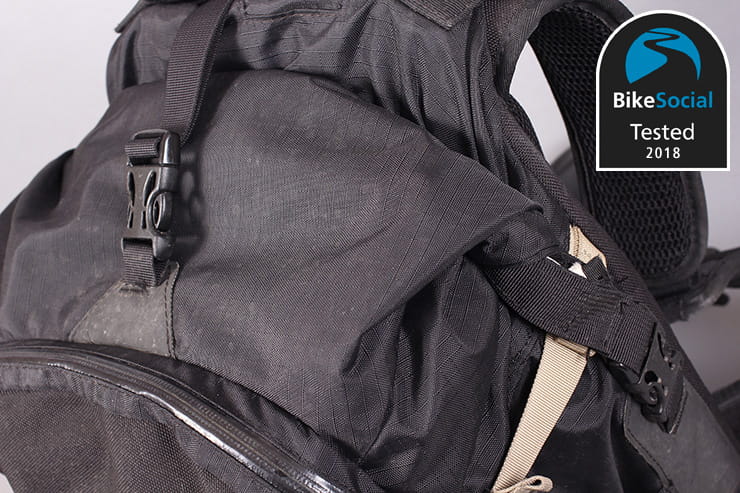 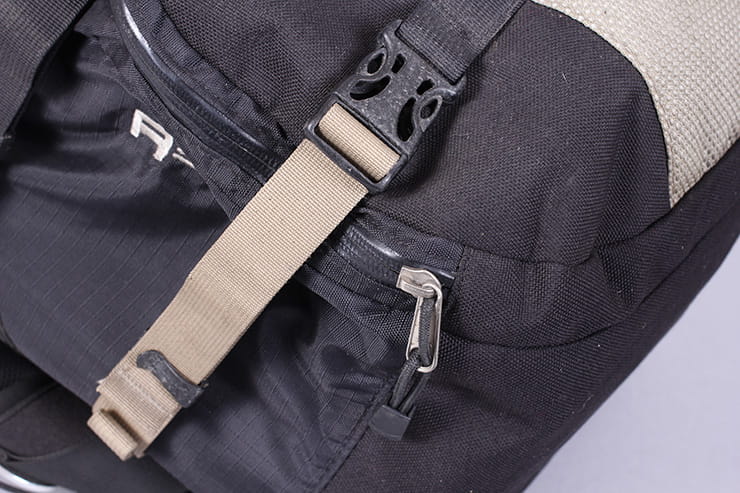 I’m aware that I sound like something of a Kriega fan-boy, but having used so many different rucksacks over the years, I’m yet to find anything that works so well, and is so beautifully designed. It’s tough, comfortable and versatile, so more than justifies its price tag; thoroughly recommended.

Kriega was formed in 2000 by Dominic Longman and Michael Cottam – both are product designers and bikers who used to work in the outdoor industry, and were fed up with the lack of quality luggage for riders.

Thanks to the level of detail and excellent materials, the first Kriega pack ended up costing double that of the best alternatives of the time, but the company refused to compromise. The only thing they did have to back down on was the name – at launch, the brand was named ‘Krug’ after the Wes Craven character in 1972’s ‘The last house on the left’ (who’d later be called Freddy Krueger). Unfortunately the champagne manufacturer took exception…