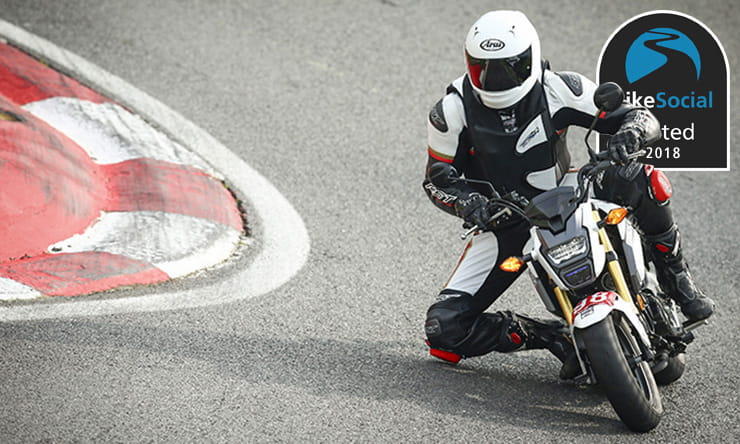 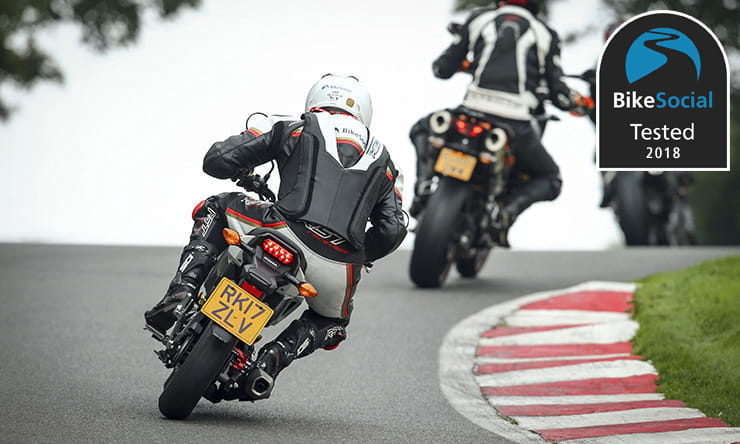 Airbags are now mandatory for all Moto3, Moto2 and MotoGP riders. The ruling, from Dorna and the FIM, says that the systems have to cover the shoulders and collarbones – back protection is optional, though if it is included, it must cover the whole spine.

At the time of writing, only two manufacturers – Dainese and AlpineStars – build the electronically-deployed systems built into the rider’s leathers, which monitor speed, direction of travel and G-forces. While MotoGP riders will wear suits from other manufacturers, the airbag tech inside – which the rules say must not require any modifications to the motorcycle – will currently be made by Dainese or AlpineStars.

Motorcycle airbags can potentially reduce injury in a crash, or even save your life, but they’re expensive. The question is, what price can you put on safety? 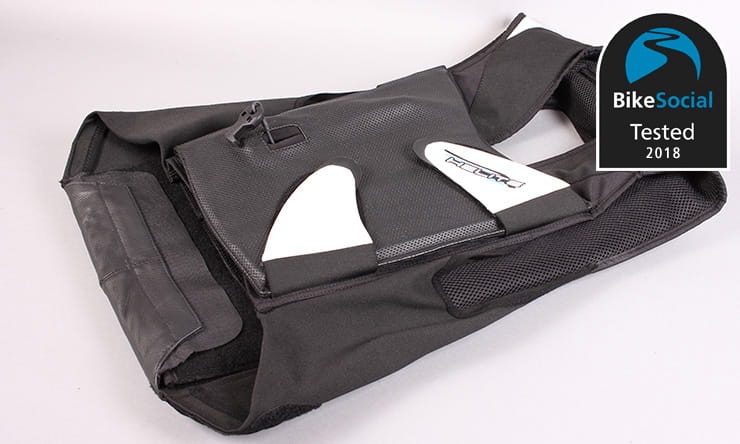 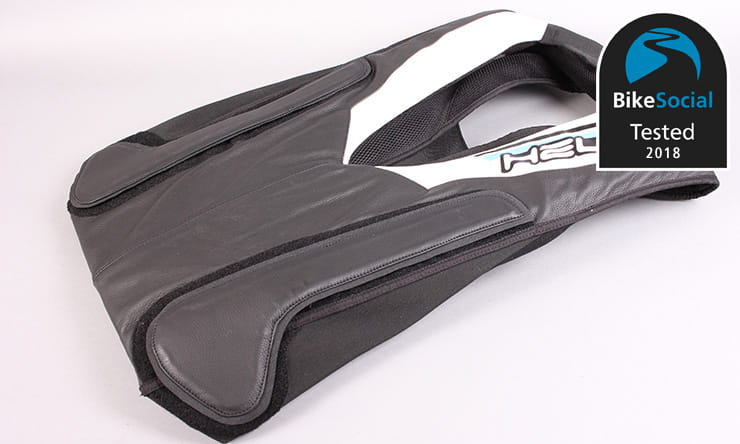 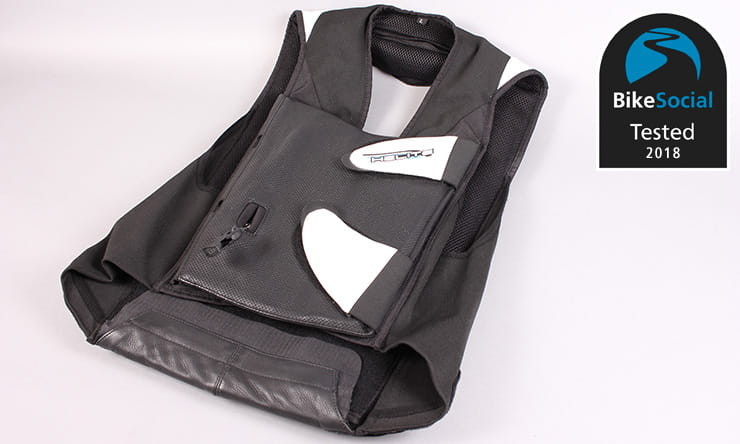 The Helite GP Air is part of the company’s large range of bike (and equine) airbag systems that are triggered using a tether attached to the bike’s frame; if you’re thrown from the motorcycle, the tether pulls free, puncturing a CO2 canister and inflating the vest in 0.075 seconds.

This model has a large open section at the rear to accommodate the hump on a set of race leathers. Dense foam material is fitted to the front and rear of the vest, with the airbag inflating beneath it, creating hard outer shell and soft inner – Helite calls it ‘Turtle Technology’, and it’s the same principle as in a helmet.

Besides offering excellent chest and back protection, the GP Air extends over your collar bones and down the back, inflating to the bottom of your lid and supporting your neck in a crash.

The back of the vest is made of 1.2mm cowhide, adding further abrasion resistance to your kit. 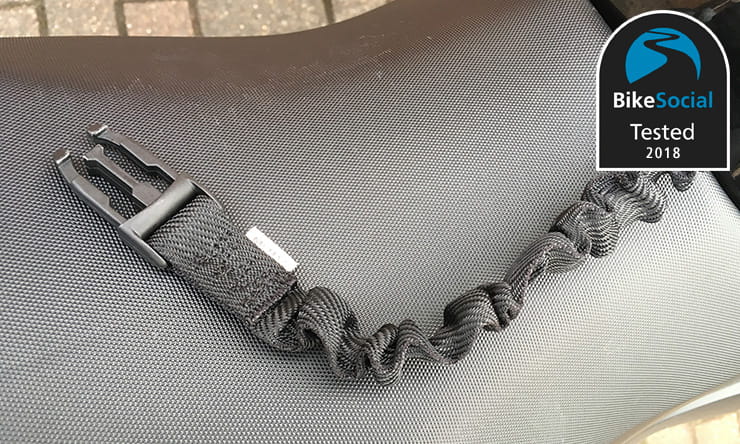 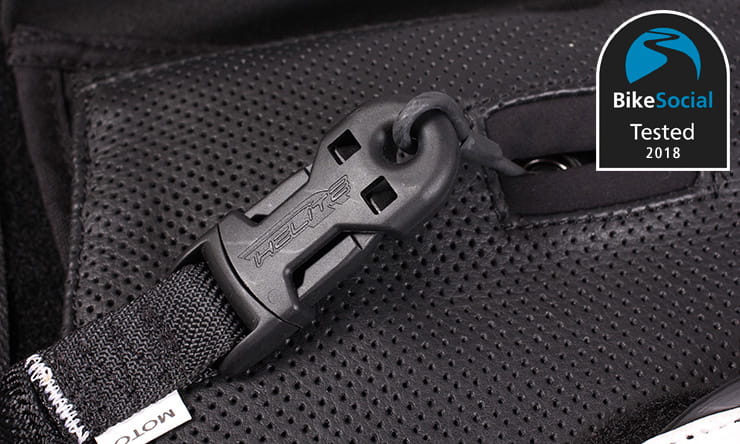 Helite’s tether is very easy to fit to your bike – I’ve tried it on a KTM 1050 Adventure, Suzuki GSX-S750, Kawasaki Versys 650 and a Honda MSX125, always finding space on the frame under the seat to tie it to, then feeding it up to dangle in front of the tank.

Of course, you do need to leave the bike for this to trigger, but you won’t travel far at all out of the seat.

The design of the GP Air means it offers very high levels of protection when worn over your leathers, though it is designed for use with a hump – without one, it’s plausible that the gap in the back could allow an unlucky rider could be hurt, were they to land on a handlebar in that position. 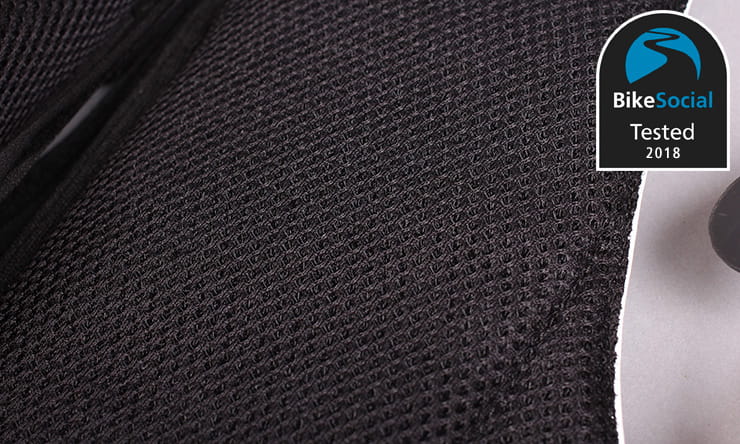 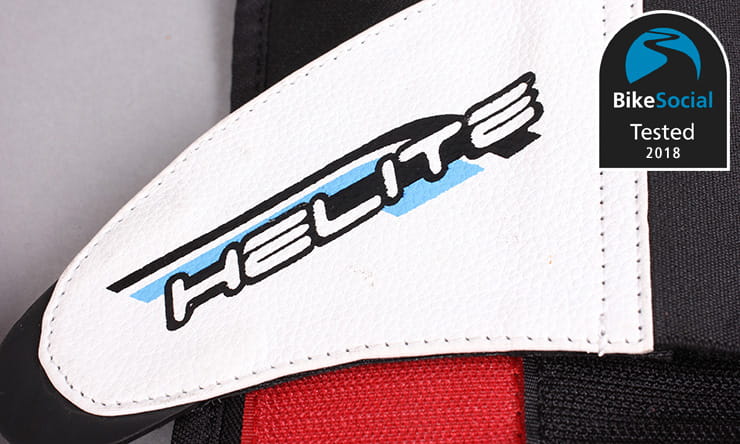 With its 3D mesh lining and Velcro fastening, the GP Air is comfortable over your leathers

Stretch panels make the GP Air easy to wear over your leathers, though it can be a little tricky to get on an off at times.

It weighs 1.74kg, and the Velcro fastening is a simple way to get a good fit. It doesn’t restrict movement significantly, though of course comfort is always subjective, so try one with your own leathers, both on and off your bike. I found that the edges of the vest did touch my neck – it’s not soft like the neoprene edging on my RST leathers, but it didn’t make me sore.

Helite offers a ‘try before you buy’ service from its website and through dealers, which is well worth taking advantage of. 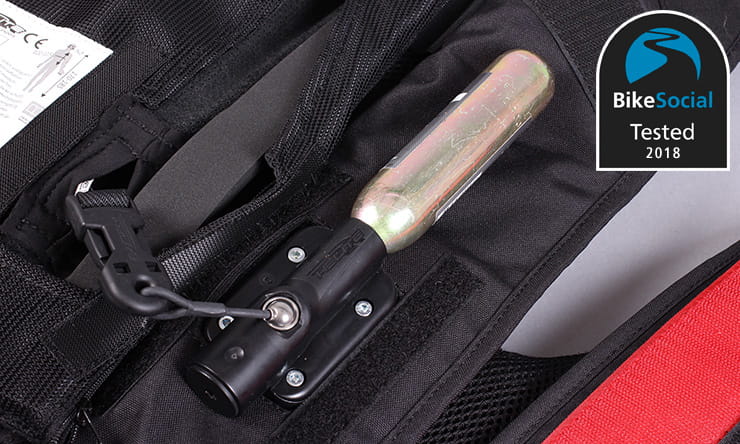 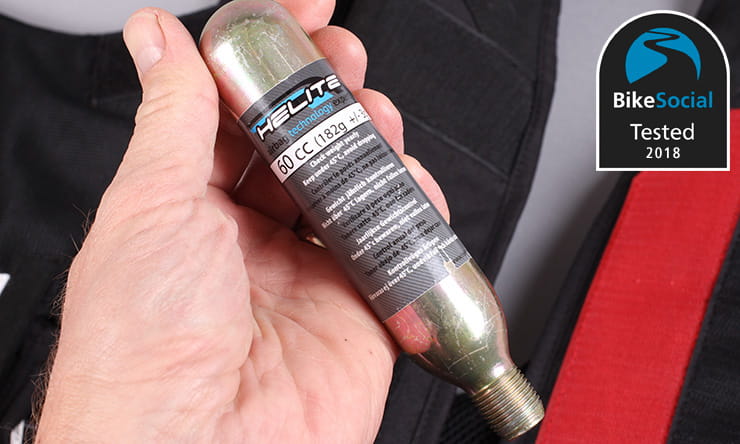 A new cartridge is all that’s needed to re-arm Helite airbags, and it costs just £19

It’d be fair to worry that the tether system would see you triggering the airbag every time you get off the bike to refuel, but the force needed to trigger is substantial. When I started using airbags I did keep forgetting, but the tether is strong enough to pull hard at the bike without firing. In fact, I’d suggest you make sure you get off on the side-stand side of your bike, especially if parked on a slope… it could be possible (though hard) to unsettle a lightweight machine.

The tether is well made, with a stretch section that allows movement – you never feel restricted on the bike, and it’s easy to set the position in such a way that you’re not aware it’s clipped on, but it’d still be able to fire very quickly in an accident.

One of the major advantages Helite’s airbags have over the Dainese and AlpineStars competition is that, if deployed, they can be recharged by the owner – they don’t need to be sent back to the factory to be armed again, leaving you without your kit, and a bill for the service.

I’m fortunate enough to have not had to use an airbag in anger, but I have deployed them several times during reviews over the past few years. Inflation is incredibly fast, and while it takes your breath away as the bag deploys, it’s not painful, and doesn’t risk harm.

With a sharp ‘bang’ as the unit inflates, your head is instantly supported, and your upper body hugged by a firm pressure; have a friend strike you repeatedly (it’s surprising how many are eager to do this) and you’ll see how very high levels of force aren’t transferred to your body.

As soon as the bag is deployed, a hissing sound can be heard – after about a minute it noticeably starts to deflate, and it’s not much longer before it’s lost all its pressure so you can move freely (or be attended to if necessary).

After it’s been fired, the mechanism is easily reset by simply loosening the bottom of the trigger with an Allen key, refitting the tether, tightening up and screwing in a new bottle. It takes less than five minutes and costs just £19 for a new gas cartridge.

Due to its design of using a hard outer shell and soft inner bag, this could replace a back protector, as long as your leathers include a hump to fill the gap in the back. And of course, it offers chest, shoulder, collar bone and neck protection too.

You can still keep a back protector inside your leathers, and I tend to; while the trigger system is incredibly simple, and hence reliable, I worry that I could have a low-side that sees me sliding with the bike into something static, or another rider hitting me from behind, the bag perhaps not deploying in this scenario.

It’s not cheap, but compared to the electronic systems on the market – which will also cost you to re-arm if triggered – it’s not a bad price. And of course, you can use it with more than one set of leathers.

If you’ve not got a race hump, or you’re riding in textiles on the road for instance, there are other Helite systems that might be more suited to you, but for those with race leathers, the GP Air could be a life saver.