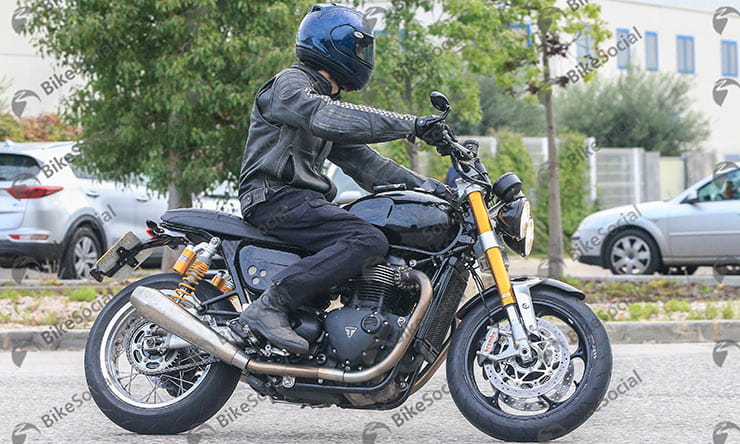 Back in February this year Triumph applied for a new trademark on its classic Speed Twin name. With no objections it’s likely to be granted next week. And here’s the bike it’s going to be used on.

You might think it’s just a Thruxton R with some old-school Speed Triple headlights fitted, plus an incongruous alloy front wheel. And at the moment that’s pretty much what it is. But with a few more changes it will be transformed into yet another model in the fast-growing Bonneville line-up, with its own distinct niche.

In fact, the key change isn’t one that immediately leaps out from the picture. It’s the bars. Gone are the Thruxton’s low-mounted clip-ons, and in their place sits a set of wide, straight, Renthal-style bars bolted to a rather temporary-looking set of aluminium brackets on the top yoke. Chances are that those brackets are allowing Triumph’s riders to experiment with various bar positions before settling on the final production set-up.

Those motocross-style bars, allied to the twin headlights, massive upside-down forks and alloy wheels – a rear alloy is sure to replace the spoked wheel on this Thuxton-based test mule – add up to a classic Streetfighter look and reveal the new niche that Triumph is aiming at.

While the Thruxton harks back to the 1960s with its café racer style, the Speed Twin – named to sit above the alloy-wheeled, 900cc Street Twin and reusing a famous title that was used from the 30s to the 60s – will end up as an early-80s-style streetfighter. Still retro, still cashing in on the current fashion for the past, the bike will explore an evocative era that other firms haven’t yet mined.

Triumph has a strong record of pre-empting trends – the Bonnie is perhaps the stereotypical retro bike, the old-model Thruxton got the jump on the café racer scene long before its rivals and the Scrambler was years ahead of the current fad for old-fashioned off-roaders.

Mechanically, the final bike is likely to be largely identical to the Thruxton R. The alloy swingarm is identical, as are the Showa BPF forks, piggyback-reservoir Ohlins shocks and Brembo Monobloc brakes.

At the moment, most of the bodywork is also identical to the Thruxton’s, but remember that this is just a prototype. While the final bike is likely to retain the same fuel tank, expect changes at the back to reflect its more modern muse. Different side panels and a new seat are virtually certain.

The twin headlights, which reflect both the 1980s fashion in streetfighters and also the second-generation Speed Triple from the late 90s, are likely to remain. At the moment they’re mounted on a makeshift bracket, but even during this testing phase it’s important to get the lights and clocks right. Since they turn with the bars, their weight and aerodynamic properties will influence the handling and thus affect the decision on handlebar positioning that’s being experimented with during this test.

With most new 2017 model reveals now complete, and clearly lots of work still to do, there’s no way that Triumph will have the Speed Twin ready as anything earlier than a 2018 model. So we can expect it to be officially unveiled at one of the major shows in late 2017.