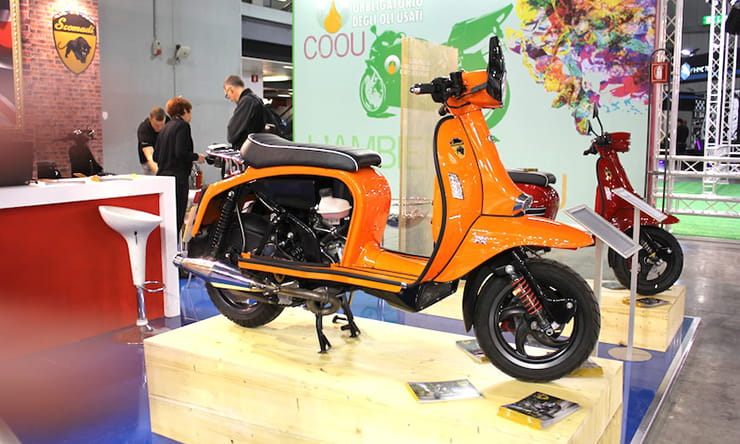 Unless you're up on current scooters then the Italian sounding but British brand Scomadi may not mean a lot to you. The style however may ring a few more bells…

It could arguably be traced back to the late 1980s when engineer and scooter enthusiast from the north west, Frank Sanderson, was involved in a project to install a Yamaha RD350 YPVS engine into a Lambretta chassis. This evolved into the concept of production scooters but it didn't really get beyond low double figures.

Meanwhile, in the same area, fellow scooter enthusiast and racer, Paul Melici, was carrying on with his business, PM Tuning.

Fast forward to the 21st century and eventually these two got their heads together and the Scomadi brand was born. In 2009 a limited edition run of 10 carbon fibre Scomadi Turismo Leggara 250 models were hand built in Lancashire, the first brand new scooters to be built in the UK since the 1960s. These were followed by a small run of painted models, then customer specific 300cc versions, all using Piaggio engines.

The next step was a widely affordable version for the market, which inevitably saw production moved to Asia, resulting in the launch of the TL50 and TL125 models in 2013 at the Milan Motorcycle Show.

Earlier this year Scomadi launched the TL200 model and then, at the recent 2016 Milan Motorcycle Show, presented a 400cc version of their popular, retro looking scooter. 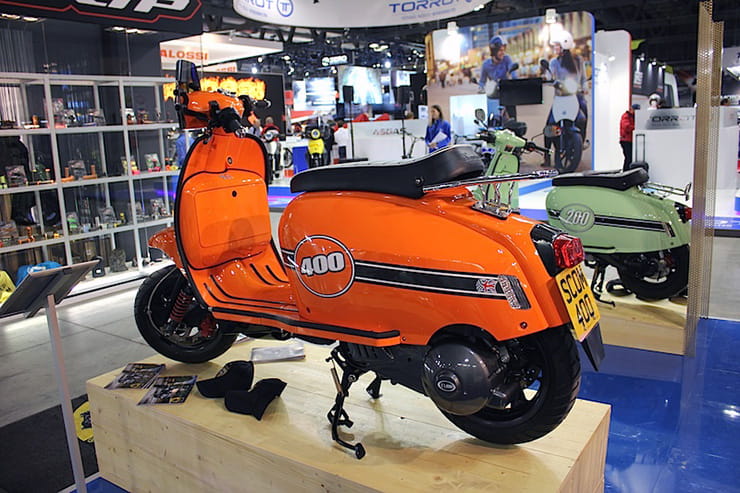 Pre-production models ready by end of 2017

For those unaware, the style is still heavily inspired by the Bertone designed Lambretta Grand Prix model of the 1960s, but of course beneath the aesthetic outer everything is brand new.

The Scomadi 400 will feature an engine that is pretty much the same as that used in the Suzuki Burgman 400. It is in fact a shorter version of that motor, originally designed by Morini Franco Motori of Italy and utilised by manufacturers such as Malaguti and Benelli in their production scooters a few years. The design rights, tooling and moulds however have now been purchased by Scomadi for this single cylinder 385cc liquid cooled 4-stroke engine - which as is the case with most modern scooters has an automatic Continuously Variable Transmission. The engine itself will be developed further by Scomadi to improve the performance and meet the latest Euro 4 regulations. To begin with this will mean ditching the carburettor and replacing it with a fuel injection system and a new exhaust system will need to be developed too for the current emissions laws.

Speaking with Scomadi in Milan, they revealed that an all new chassis is being developed to cope with the increased performance of the 400 engine, and other upgrades compared to the small capacity models will include twin front disc brakes. Unlike the Burgman maxi scooter though, using this shorter engine in the Scomadi chassis will likely equate to a sports scooter feel on the road, akin more to a smaller capacity machine rather than lazy feet-forward cruiser.

This is all good news to me however, as the modern scooter market is arguably in danger of becoming rather stagnant. Therefore, a kick up the derriere from a relative British newcomer could well give it the shake up it needs to put some excitement back into commuting and scootering. After all, just because many treat scooters as a tool it doesn't mean you shouldn't enjoy the ride.

Scomadi also explained that the engine is currently going through evaluation as part of the scoter's development. The torque is already impressive, they are aiming for approximately 28hp to 32hp at the rear wheel when finished, and the goal is to have the final pre-production models ready for presentation towards the end of 2017.

Fingers crossed this could mean a new sporty, large capacity scooter awaits us in the showrooms, early 2018, which in my book is well worth adding to your 'Dear Santa' list for next year.