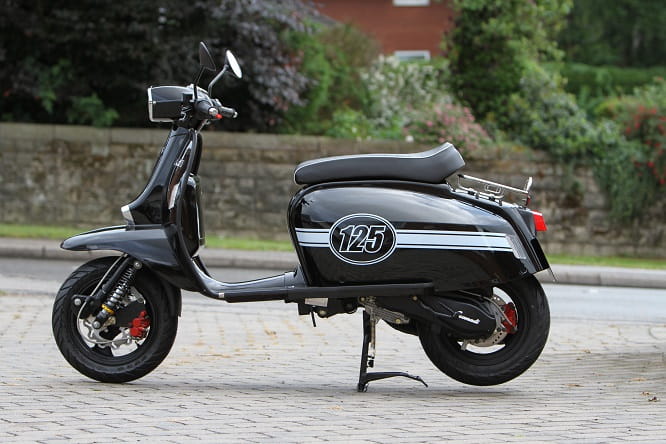 As new scooter brands go you’d have to search quite hard to find one that has had a better first year than Scomadi. The UK based company launched their 50cc retro scooter just before Christmas 2014 and have recently introduced this 125cc version but that’s not the whole story. 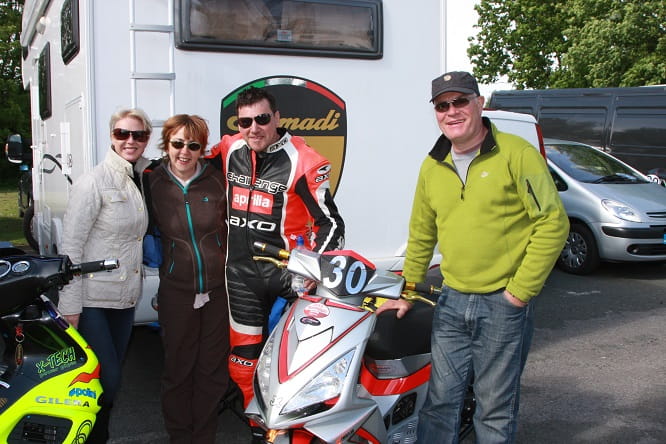 If you’re even vaguely interested in classic scooters you’ll probably recognise the shape of the Scomadi, it’s based on the popular Lambretta Grand Prix – or GP, a classic Bertone designed machine. While Lambretta may have been killed off a while ago the brand is still as iconic today as it was back in its heyday and original scooters command high prices, leaving them unaffordable to many. What makes Scomadi so appealing is that, unlike people who sit on the Vespa side of the classic scooter fence, Lambretta fans can’t buy a modern representation of their favourite machine - other than the ill fated Lambretta LN, a poor imitation that came and went quite quickly due to licencing problems with the protected brand name. Scomadi on the other hand shares all the classic Lambretta styling cues but also comes with a modern four stroke automatic engine; it’s the scooter equivalent of a new Triumph Bonneville. All the style of the original but without the accompanying dirty hands and oil leak.

To give you some idea of the kind of stir Scomadi has caused amongst classic scooter riders, the first shipment of 100 50cc, £1871 Scomadis sold out very quickly, ironically many of them were quickly fitted with larger capacity two stroke engines by dealers and owners. The hype caught UK dealers and the emerging company out and neither could keep up with demand but the 50 was only the starter in a much bigger dinner. The eagerly anticipated 125cc Scomadi arrived in dealers in June, if you’re paying attention you’ll not be surprised to hear that they were all presold and deposits were already being taken for the second batch due to arrive in September. Yes you’ve guessed it, the second batch is also pre sold and the third container load will be sold before the boat docks in November. Again there was more to come… The companies intention was to launch a 300cc ‘Flagship’ model using a Piaggio derived engine, the first 100 units were to be hand built in the UK at a premium of £500 over the standard £4500 price tag. To help move things along Scomadi launched a crowd funding platform at the end of last year and the first 100 deposits were taken within a couple of weeks, despite the scooters not being planned until June this year – or at least that was the original plan. 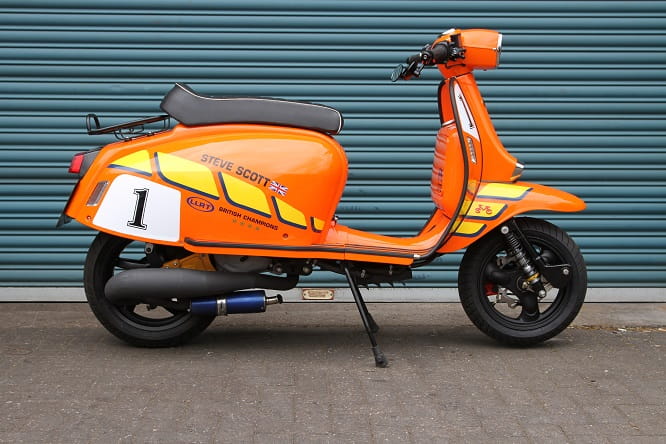 Piaggio pulled the plug on the Vespa GTS 300 engine due to be utilised by Scomadi, so production was put back while the company searched for a suitable alternative. Earlier this month, after months of speculation on social media, it was announced that rather than a proposed 300cc model, the ‘Flagship’ Scomadi would now sport a 200cc lump, albeit a European built twin cam, fuel injected, liquid-cooled engine. Despite the initial disappointment over the capacity drop, hardly any of the 100 people who pledged £500 ten months ago have asked for their deposits back and even if they did there are plenty more on the waiting list to take their place – so what is it about Scomadi that has caused such a buzz?

I’m from a classic scooter background; I own vintage Lambrettas and Vespas so I know all about getting my hands dirty. I also own a modern Vespa GTS 300; it offers a practical modern alternative to a classic geared two stroke, retro style without the hassle. Lambretta fans don’t have anything more modern than the 1960s Lambretta GP though, so a similar style, affordable scooter with the benefits of modern equipment was always going to be a winner. Enter the Scomadi… 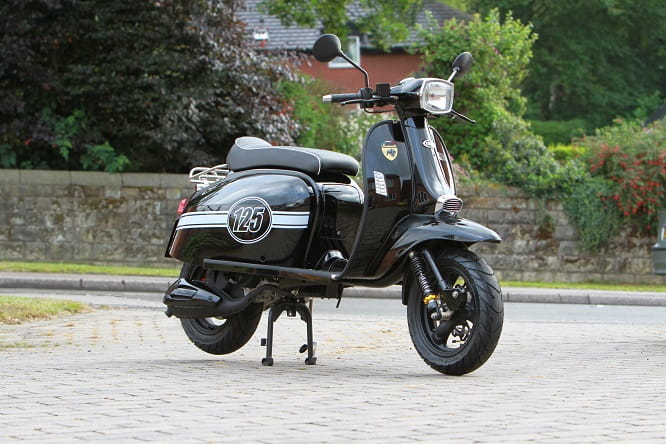 The TL125 may look every bit the Italian classic and be designed by a couple of Englishmen but like most things it’s actually produced in China. Having said that though for it’s price tag of £2571 it is actually very well put together, everything fits well and the plastic body panels look good. It’s quite easy to mistake a Scomadi for a Lambretta at a glance. If you know your scooters the first thing you’ll do is compare the Scomadi to a Lambretta GP and you’ll notice the Scomadi is wider and the seating position is taller. Other than that though the look is almost identical, albeit with a modern twist. The Scomadi comes with a few touches that weren’t fitted to the original, for instance it has LED indicators, disc brakes front and rear, twin adjustable front shock absorbers and of course an auto engine with electric start.

All three variants of the Scomadi come with the same chassis, although the 125cc has had a few revisions over the earlier 50. Namely longer travel front suspension, a disc brake at the rear to replace the drum, a more comfortable seat and the backlighting for the instruments have been dimmed slightly to reduce glare at night. If you’re shorter than average then you’ll probably struggle a bit with the wide seat and 805mm seat height but the scooter is fairly light at just 100kg’s so isn’t too hard to handle if you’re confident enough. 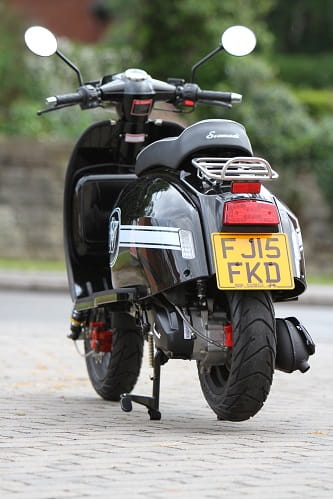 Let’s not beat about the bush, the scooter may look Italian but the 50 and 125cc models both have a Chinese engine. It’s a generic lump, air-cooled and carb fed but despite that it is actually quite surprising. I’ve certainly ridden a lot slower 125s in the past. The engine starts easily on the button and pulls away cleanly from cold, it also has a fair amount of mid range grunt so you can be confident riding in faster moving traffic, or while nipping through town. Our test scooter was virtually brand new but it was lively enough to show just under 65mph on the nifty digital speedo. That top speed equated to 58mph on the GPS but I’d expect that to go over 60 once it’s loosened up a bit. The Scomadi is a physically large scooter and has quite a bit of road presence, not to mention the styling that gets it noticed wherever you go, which can only be a good thing – although expect to have older gents talking to you about owning one back in the 1960’s whenever you park up and remarking ‘I didn’t know they still made these.’

Aside from a surprisingly nippy engine the TL125 feels well planted on the road, the 12” wheels are more stable than the 10” items fitted to an old Lambretta and the standard fit Duro tyres are grippy enough in the dry. You can throw the lightweight scooter around a bit, in fact I was impressed at just how sporty the scooter felt as an overall package, although the front shocks are a bit too hard for my liking - even with the preload backed right off. You do get used to them though and they are better than the ones fitted to the 50cc front end. The disc brakes are powerful enough to stop it quickly as well.

One thing that may put off some potential owners who may be used to a more conventional modern scooter is the lack of storage space. The fuel tank lives under the seat so there’s no storage under there but you do get a lockable glovebox up front, it’s handy but not very big. The Scomadi also comes with a rear carrier as standard so that’s useful to bungee a bag to the back and with a Scomadi it’s about looking good, not practicality.

Equipment wise the Scomadi comes with a clear and easy to read digital dash complete with various functions including a tacho, fuel gauge, max speed, running time, trip and speedo. The clear LED indicators blend into the panels nicely, rather than spoiling the aesthetics of the scooter and the halogen headlight is brighter than most Lambrettas, although isn’t overly powerful. 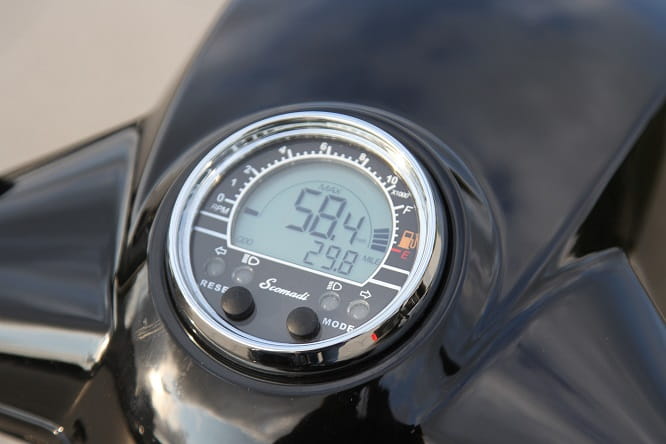 For its price there are quite a few scooters to choose from but with a Scomadi you’re getting something different to the normal run of the mill scooters. You’re buying into the next big thing, it may be early days for the company in terms of reliability, longevity, residual values and customer confidence but you can’t argue that Scomadi have tapped into a niche market and got the machine looking spot on first time. They’ve also gained a following both with existing classic scooter fans and with people who always wanted a classic but either couldn’t afford one or weren’t capable of looking after one. With a Scomadi you’re getting the best of both worlds, hopefully without the hassle. If you want one you need to be prepared to wait though, at the minute you’re looking at November if you put a deposit down now, or you can wait until next summer if you want to get the 200cc flagship model…