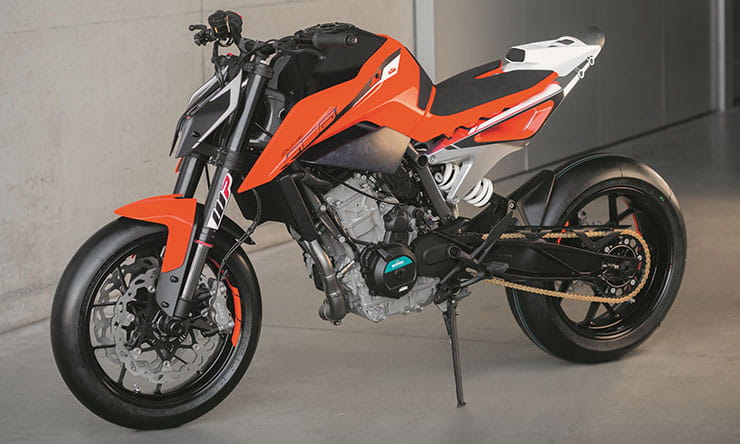 KTM finally confirmed that they are working on its first parallel twin platform after unveiling a prototype of a new Duke 790 and, although details are still few and far between, the streetfighter style machine promises to be extreme and full of cutting edge technology.

The Austrians are talking tough and have released some typically cryptic details on the Street Triple competitor, which they have codenamed LC8c – with ‘c’ meaning compact and LC8 standing for (in their words) ‘good times ahead’. Yep, they really did say that!

Hyperbole aside, what we do know is that the prototype shown features a parallel twin that’s tightly wrapped in a hand welded steel tube frame in KTM’s traditional style, with high end WP suspension and a beautifully machined aluminum subframe and tail unit. The dashboard is tiny and the headlight, the headlight’s just plain cool.

Shod with Pirelli slick racing tyres and with a MotoGP style exhaust poking out of the tail unit, the futuristic Duke 790 prototype looks more like a stunt bike than something you’d ride to work. It also looks far less practical than the test mules which have been spotted in testing over the past year, suggesting that the prototype revealed at EICMA today is as much a PR exercise and technological test bed as it is a representation of the bike we expect to go on sale for 2018.

KTM’s creative press release claims that ‘the electronics division plundered the experimental technologies lab. As a result, advanced ride by wire, next-generation rider assistance systems, integrated connectivity and tomorrow’s sensors are here today. But that’s not the end of it. Imagine a quickshifter that takes its name extremely seriously. Custom ride modes. Personalised traction control. And – hold the press – there’s a 3D printer involved in the production of both the exhaust system and triple clamp. The result is out of this world. Knockout rollout in Milan.’ (yep, they said all of that too).

We’ll have to see how much of the prototype’s coolness reaches the production version when it hits the showrooms as an expected 2018 model, but it’ll have to be competitively priced, and a touch more practical to the daily rider, if it is to go wheel-to-wheel with the aforementioned Triumph and bikes like the best selling Yamaha MT-09.