There’s no secret that KTM is working on a new 800cc parallel twin Duke and after being spotted several times in ‘mule’ form it’s now moved on to pre-production prototype status complete with new styling.

Given the complexities of developing an entirely new engine – not to mention one that KTM’s 2015 Annual Report referred to as ‘revolutionary’ – it’s no surprise that the motor was initially and extensively road tested in a bike that was cobbled together from existing components. Several times the new twin was seen in a black prototype that featured the swingarm from a Duke 690, off-the-shelf wheels and suspension and brakes pilfered from other models in the firm’s line up. 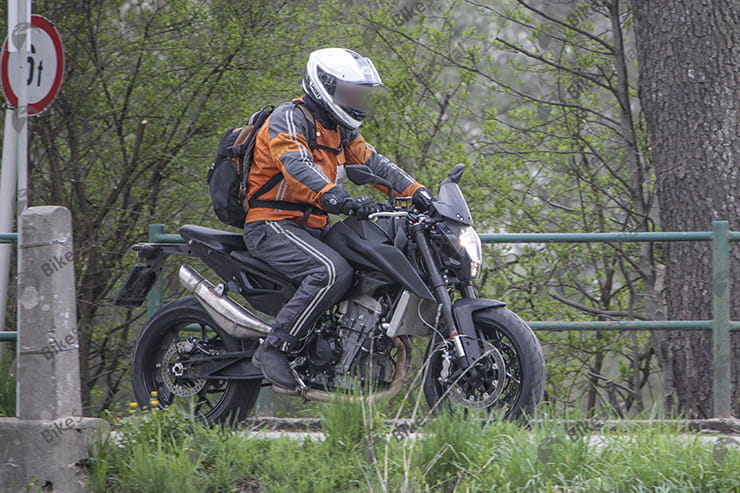 Now, however, we’re getting a glimpse of a near-finished machine. Likely to be called the 890 Duke when it reaches production next year, the machine will be built in India by KTM’s part-owners Bajaj, helping keep costs down and making the model more accessible than other bikes in the range. Sitting in the yawning chasm between the single-cylinder, 72bhp 690 Duke and the 170bhp 1290 Super Duke R, the new bike is expected to make something in the region of 100bhp from an engine that’s between 800cc and 900cc in capacity.

The old mule’s 690 Duke swingarm is gone, replaced by a bespoke design that continues the usual KTM theme of externally-visible bracing, and ahead of it sits a tubular steel chassis designed purely for the new bike. It’s wrapped in styling that adopts the latest KTM trends, which are due to be mirrored in updated 2017 versions of the smaller 390 Duke single and the range-topping 1290 Super Duke R. In particular, the jutting side panels that extend right to the front forks are set to become a KTM signature, having already appeared on the Super Duke GT.

Another unusual element on the bike is the new exhaust, designed to help the engine cope with Euro 4 emissions laws and perhaps one of the reasons KTM describes it as ‘revolutionary.’ It’s likely that the unusual shape of the end can, which looks a little like a two-stroke’s expansion chamber, is designed to tune sound waves – getting them to bounce around inside the end can in such a way that they partially cancel themselves out.

The emissions controls and catalytic converter are mounted further forward. The cat is just visible below the rider’s foot, but it extends upwards into a collector box that sits vertically between the swingarm’s sides, giving it a large volume but largely hiding it from sight. A corollary of that is that there’s no space for a conventional rear shock and linkage to sit there – instead the shock is mounted almost horizontally on the bike’s left hand side, with a direct connection to the swingarm instead of the usual rising-rate linkage. As is common on KTMs, it appears the fuel tank is under the seat, leaving the space above the engine clear for a large airbox to be fitted.

Although the bike’s suspension is the usual WP kit that we’d expect to see on a KTM, since WP is a KTM subsidiary, the brakes are unfamiliar. We can’t make out the logo, but they’re not Brembos as used on high-end KTMs or the ByBre (‘By Brembo’) budget versions seen on cheaper models like the 390 Duke.

Up at the front, the headlight might not be representative of the final design. Several other 2017-spec KTMs have been seen sporting an unusual split headlight – with two stacked sets of lights and a vertical strake between them. It seems this design is also going to become part of the firm’s new look, and as such something similar may well be set to appear on the final version of the 890 Duke.

You can expect to see the final machine at the Cologne Intermot show later this year, along with a redesigned 390 Duke and restyled 1290 Duke, both also featuring technical updates to meet Euro 4 emissions limits.