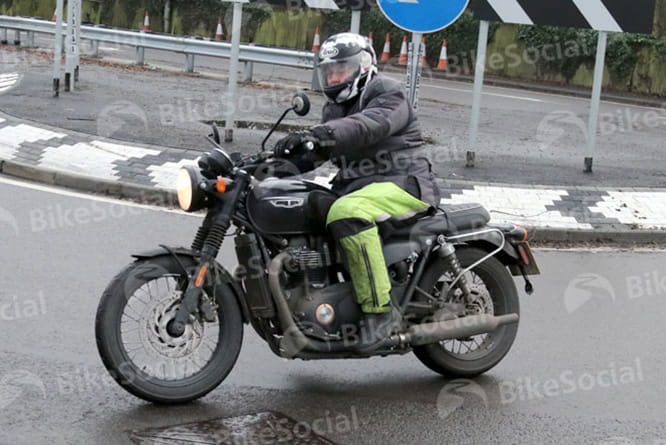 It’s abundantly clear that the new water-cooled Triumph Bonneville range is set to expand considerably over the coming months and these pictures reveal perhaps the most obvious derivative that’s currently still to be officially unveiled.

You’d be forgiven for thinking it’s simply the new Bonneville T120, but look closer and you’ll notice that there’s just one front brake and the engine sports and tiny “900” logo at the base of the cylinders. That means this bike is combining the convincing retro styling of the T120 – wire wheels and all – with the engine and running gear of the cheaper Street Twin. In doing so, it will effectively be a direct replacement for the old air-cooled, 865cc Bonneville, which is currently still available in wire-wheeled T100 form.

The hole in the range for a 900cc Bonneville in 2017 is obvious; the old air-cooled bike doesn’t meet new European regulations, which are already in force for newly type-approved machines and will be extended to existing models from 1st January 2017. As well as tightening emissions limits the rules impose mandatory ABS on all newly-sold bikes over 125cc, and on both counts the old air-cooled Bonneville and its surviving derivatives – the Scrambler, America and Speedmaster – will be effectively outlawed from being sold as new machines.

While the new Street Twin fractionally undercuts the old Bonneville at £7300 compared to £7599 for a T100 Black or £7899 for a T100, it’s down on power (54bhp vs 68bhp) and specifically designed not to be as retro-styled. For a convincing Bonnie appearance with the new water-cooled engine, you’d currently have to opt for the T120; prices haven’t been announced for that bike but they’re expected to be closer to £9500. The bike spied here is likely to come in at somewhere near £8000 when it replaces the T100 later this year.

The big question this raises is whether the 900cc engine will be in the same 54bhp state of tune as the Street Twin or have its power bumped up to nearer the 68bhp of the outgoing 865cc Bonneville. Notably the Street Twin has a ‘High Torque’ version of the 900cc engine, and Triumph is to sell both ‘High Torque’ and ‘High Power’ tunes of the bigger 1200cc derivative for the T120 and Thruxton respectively. Will there be a ‘High Power’ version of the 900cc motor? That might make sense if there’s to be a model that matches the old Bonneville’s 68bhp. 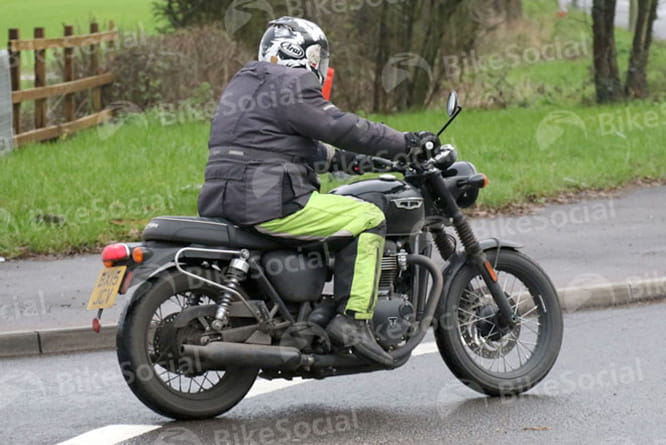 While the engine tunes are denoted by the letters ‘HT’ or ‘HP’ next to the capacity marking on the cylinder, they’re too small to be read in these pictures. What can be seen is that the engine doesn’t have the T120’s dual throttle bodies, which feature dummy carburettor styling to evoke the original Bonneville. Instead the bike appears to have the same intake arrangement as the Street Twin, which uses a single 39mm throttle and has no fake carbs. That could be an indication that the engine is in the same ‘HT’ state of tune, and that buyers wanting more power will be ushered towards the larger-capacity T120.

Power isn’t the be-all and end-all, though, and as its name suggests, the High Torque 900 motor in the Street Twin makes a fair bit of it; 59lbft at just 3230rpm. That’s 18% more than the 865cc air-cooled twin of the Bonneville T120, so even in the same, low power state of tune as the Street Twin, this new 900cc Bonneville should feel punchier than the old model.

Given that the air-cooled Bonnies must all be superseded by the end of the year, we might not have to wait too long before Triumph officially pulls the wraps off this version.

In the market for one of the new Triumph Bonnevilles? Has this changed your mind?