Dakar 2014: Pedrero takes victory for Sherco as Coma closes in 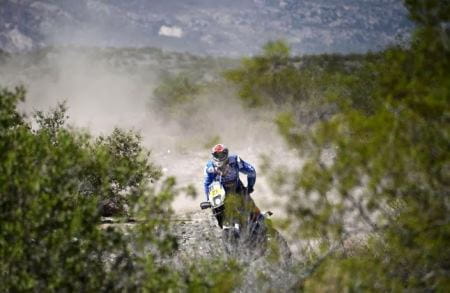 Pedrero’s win was nothing short of impressive after he finished 43rd in the first leg of the marathon stage.

“Today was no easy step as we were a long way back. I had to put in all my focus and desire to overcome stones, dry rivers, mud and overtake other riders” commented the Spaniard.

I’m very, very happy as my training and effort has paid off. Tomorrow however is another story so I will be studying the road-book and not looking back!”

“Today was very long and yesterday was incredibly difficult navigation in the mountains. It was a very hard day for me today but it was for all the riders.” 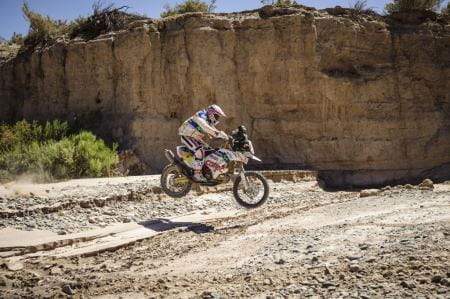 It was a strong day for KTM, with three-time Dakar champion Marc Coma rounding out the top three, closing in on Barreda in the overall rankings. Now second overall, the Spaniard sits just three minutes behind the HRC man.

“Yesterday was very extreme and today was another level of difficulty. Added to that was the fact that it was the marathon stage without assistance” said Coma.

“After last week's rain it was hardly possible to see the tracks and it was very easy to make a navigational error.  The truth is that today was especially hard." 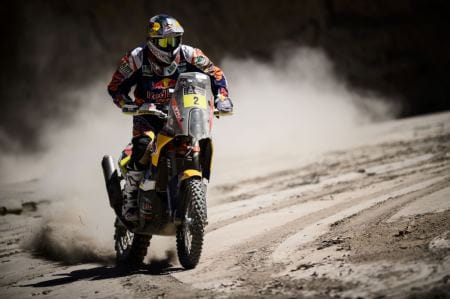 Overall leader Joan Barreda found out exactly how easy it was to make a navigational error as he lost time after taking a wrong turn. The Spaniard, who had a thirteen-minute lead after stage three, also fell while trying to make up time. He crossed the line in sixth, some thirteen minutes behind the leader.

“I was going well in the stage, until about 80 km from the end when I took a wrong turning after seeing a note at the river crossing” commented Barreda.

“I’d spent a long time yesterday going over the roadbook which also indicated another way. I lost a lot of time. I went back to the same place, and then took the same wrong direction. I fell while I was trying to make up the lost time. 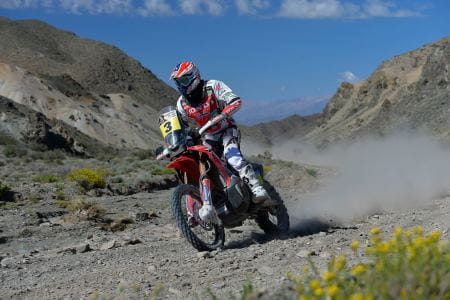 Barreda came off lightly compared to some, defending champion Cyril Depres experienced a significant setback after suffering an electronic issue just 8km from the end of the stage. This left him thirty-eighth in the stage and would mean he’d drop back from second to sixth in the overall standings, some 41 minutes behind Barreda. It was an even worse day for Britain’s Sam Sunderland who was forced to withdraw from the rally after the engine failed on his Honda CRF450 Rally.

Riders will now embark on the longest stage of the rally covering 911 kilometres including a 527km special. All eyes will be on engine temperature as the riders head towards the warmer climate of the Tucuman region.