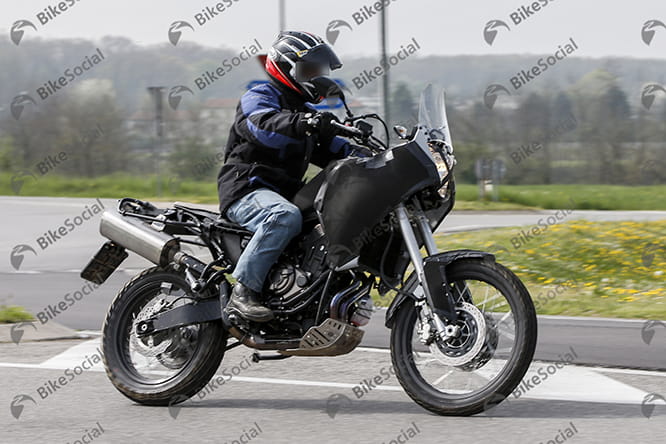 This might be one of the most important new bikes you see this year. It’s Yamaha’s new MT-07-based adventure machine and it could be the perfect antidote to the big and powerful trailies that have been filling the market.

As one of the biggest and fastest-growing parts of the bike market, it’s not surprising that manufacturers have been falling over themselves to release ever more adventure-styled machines. But while the latest R1200GS, Ducati Multistrada Enduro, KTM 1290 Adventure and others of that ilk are undeniably impressive, their ever-growing complexity, cost and performance are driving them ever further from the purer end of the adventure bike market. For those truly into round-the-world travel and venturing far from the beaten path, rugged simplicity and minimal weight are sought-after assets for an adventure bike, and Yamaha looks like it could be offering just that combination.

This bike shares the same 74bhp parallel twin as the MT-07, but mounts it in a new tubular steel frame with masses of ground clearance and long-travel suspension. New, upside-down forks at the front hold what looks like a 21-inch wheel, while the swingarm – likely to be aluminium – is nothing like the design used on the MT-07. The rear wheel appears to be 17 or 18 inches in diameter.

Unlike the MT-07 Tracer, which is also under development at the moment and shares the normal MT-07 chassis, simply adding a half fairing and a mildly adventure bike inspired style, this is looks like it has real off-road potential. That’s likely to be reflected in the name, which will almost certainly be either XT700Z Tenere or XT-07 Tenere.

It’s worth remembering that the existing XT660Z Tenere, with its single-cylinder engine, is almost certainly going to be discontinued when the new Euro4 emissions rules come into force at the start of 2017, leaving Yamaha with a big gap below its range-topping XT1200Z Super Tenere.

In prototype form, this bike already carries some parts from the current XT660Z. Both the headlight and tail light have been temporarily borrowed from the single – neither is likely to remain on the production version. The styling, however, is certainly in the Tenere mould, and the front fairing at least appears to be something approaching a production part. It’s covered in a felt-like disguise but appears to be fully formed and isn’t taken straight from another machine.

There’s a complete lack of rear bodywork, which is something that’s sure to be addressed, but the overall stance of the production bike won’t be significantly different to this prototype.

Like the new Honda Africa Twin, the bike forgoes the soft, touring-focussed aspect of many adventure bikes in favour of something that can hold its own off-road. You only need to look at the ground clearance to see that Yamaha is serious about that, even if it makes the bike uncomfortable for short-legged riders.

The stripped-down style adds hope that it will also be light enough to manhandle across tough terrain. The basic MT-07 is only 182kg wet, complete with a full tank of fuel, and if the new Tenere twin can come close to that figure it will undercut most of its rivals.

If Yamaha follows its recent trends, it will also be undercutting its rivals in terms of price. The MT-07 is a mere £5349, and that could mean the new Tenere, using the same mechanical parts, will come in at under £7000 – making it a direct replacement for the current £6999 XT660 Tenere despite having a huge boost in performance and double the cylinder count.

At the moment, the prototype appears to be in a fairly early stage of development, suggesting it could be a 2018 model rather than a 2017 bike. But given the strength of the adventure bike market Yamaha is surely pouring plenty of its resources into getting development completed, so it could be accelerated to be in showrooms next year.

Own an XT660Z Tenere? Give us your opinion on this new version.  or