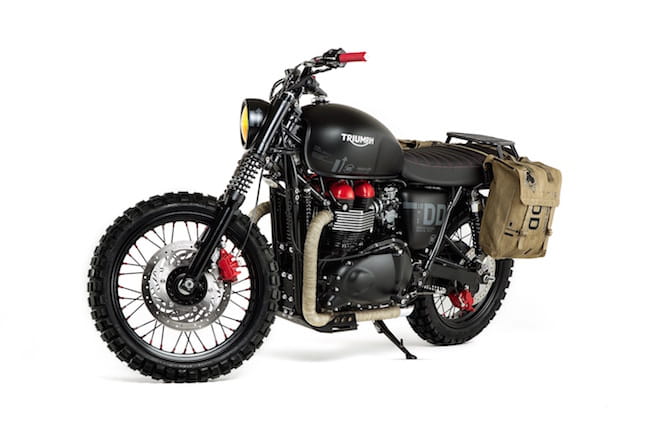 Triumph has just lifted the covers off a one-off custom Bonneville, to be called the ‘Venom’, which will make its debut at this weekend’s MCM London Comic Con.

The bike has been designed and built to celebrate the launch of the new Metal Gear Solid V: The Phantom Pain game, a series which has a strong partnership with the Hinckley manufacturer with Triumph motorcycles featuring in Metal Gear Solid 4 and Metal Gear Solid: Peace Walker.

It’s been based on the Bonneville T100 ridden by a character called ‘Snake’ in the latest iteration of the Metal Gear Solid game and built and designed by Triumphs in-house custom team. With unique styling and detailing including some game-orinated graphics, the Bonnevillle Venom is a mission-ready bike that truly reflects the world in which Snake, an ex-special forces soldier and mercenary, lives.

Mirrors, speedo and rev counter have all been stripped off and custom rims fitted with dirt-focused rubber in the form of Continental TKC80s. The stock saddle has been cut down and refined in Sneaking Suit neoprene and carbon Kevlar leather inspired by Snake’s combat wear. A heavy-duty ammo rack loops around the back of the saddle.

A yellowed-out JVB Rumbler headlight and external heavy-duty fork springs give an aggressive dimension to the front end, a profile exaggerated by the lack of front mudguard. At the rear, the cut-down guard and exclamation mark tail-light add to the individuality of the machine.  Colour matched callipers and cam cover are stand-out details, whilst the custom slash-cut exhausts deliver a soundtrack that lives up to the looks. Details such as Triumph Tiger off-road foot pegs, Renthal performance sprocket, machined throttle body caps and Triumph sport levers all contribute to making this bike as unique as its rider.

The bike will make its debut at this weekend’s London Comic Con before touring a number of events throughout the year.