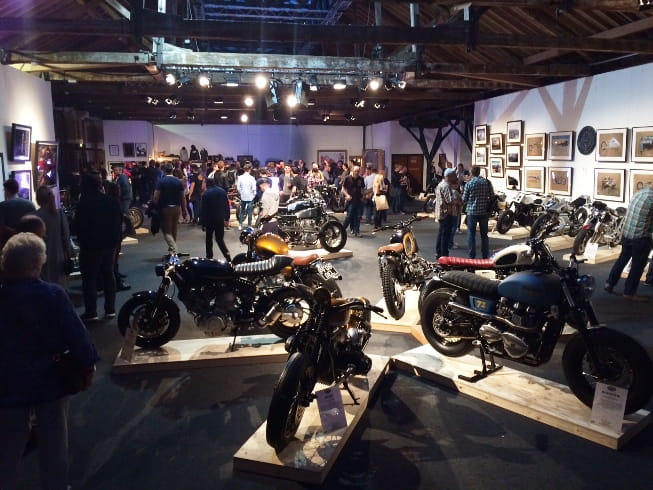 I bumped into the leading light of The Bike Shed, Anthony van Someren (commonly known as “Dutch”) as he was hurrying along carrying three cups of coffee. He was in a rush but made time for a brief chat. “Great show,” I said. “Thanks,” he answered. “It’s all about the people.”

And in a way, he’s right. Sure enough there were bikes there good enough to make your eyes fall out, but it was the atmosphere that made The Bike Shed’s fourth annual London show truly special. The people attending the event held at Tobacco Dock were as varied as the bikes themselves. No single style dominated and there was no elitism. The feeling was inclusive, collective and non-macho.

The modern European custom scene, which grows stronger each year, is refreshingly basic. For sure, there were a small number of high roller custom bikes on show that would come with eye watering price tags, like Rocket Bob’s Gas’d Rat Harley, or the French-built Avinton imported by Krazy Horse and running a tuned 1640cc S&S engine, but for the most part, it’s more about creating style from older bikes with a strong leaning to the seventies and eighties. 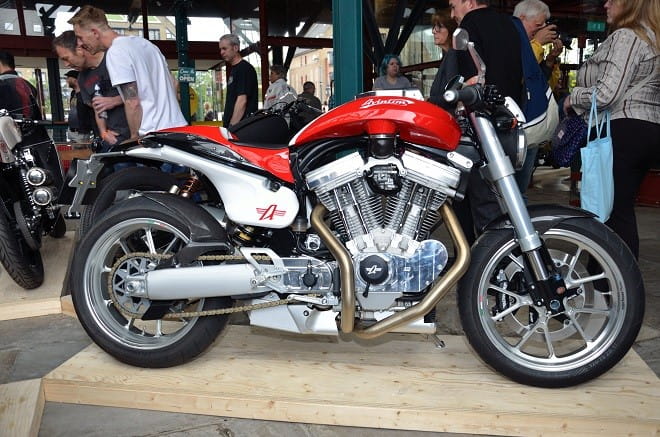 As you would expect, there were plenty of Harleys, many of them showing the same feel as the post war bikes that returning GIs crafted, mainly by removing stuff rather than adding stuff on.

Also popular as starting points for startling bikes were Hinckley Triumph twins, loads of BMW Boxer twins, the ubiquitous Yamaha SR500s and 400s, Yamaha XS650s and a few air-cooled fours from the Honda sohc era, plus a smattering of twin cam offerings from Suzuki and Kawasaki donors.

As last year, Triumph sponsored the show and had a few one-offs built by teams at Hinckley on display.

Simplicity is a key theme and you had to look hard to spot any liquid cooled machines at Tobacco Dock.

Among the many welcome aspects of the scene is the way it gives new life to bikes that were previously seen as unlovable. Dispatch riders from the 80s would be amazed to see what you can do with a CX500, turning what used to be nicknamed The Plastic Maggot into a head-turning flat tracker. 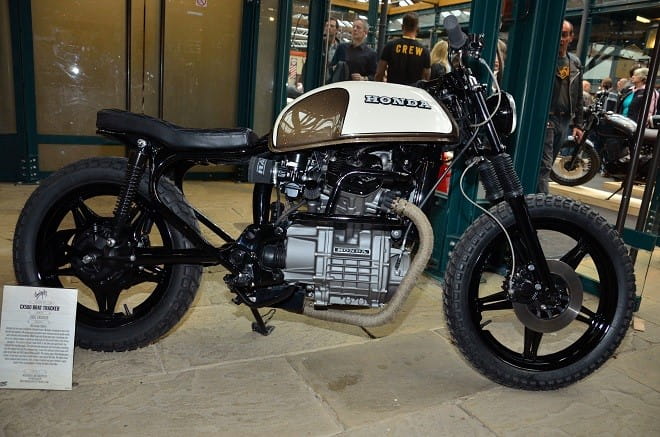 Or how about a Honda StepThru with a wrapped header, a Yoshimura end can, a one-off seat with a hole sculpted in the centre for the fuel filler, an oil cooler and yes – madness of the month – functioning Nitrous Oxide injection (on standard front brakes. Aagghh!). 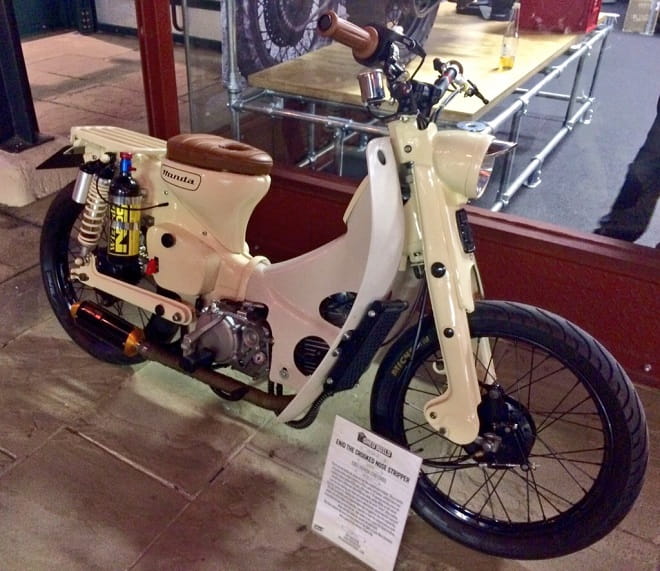 Suzuki’s GN400 was a truly unmemorable semi-custom from 1980 but in the hands of a guy, Dan, with a background in skateboards and BMX, it makes a tidy street tracker. 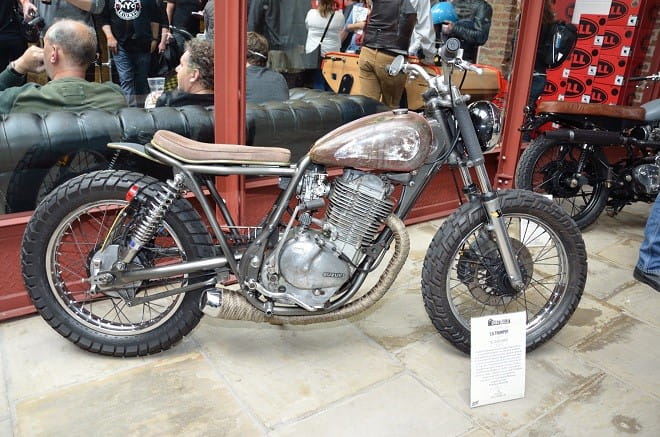 At the other end of the scale, but equally unloved in its day, was a cafe racer style Laverda Alpina, exquisitely finished in endurance racer style, with a mono-shock rear end, modern forks and a twin hole fuel filler setup. 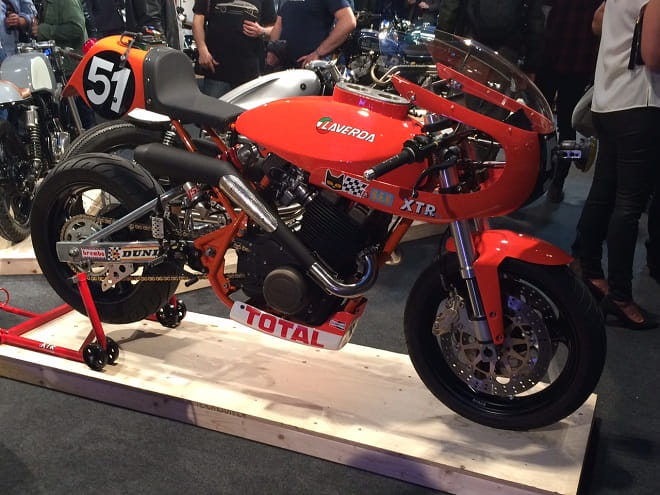 My prize for plain weird though, would have to go to the 1930 Peugeot board track racer which took 350 hours to build and is powered by a 100cc, 9 cylinder rotary engine; a scale model of a Gnome and Rhone aircraft power unit from the first world war. It runs on methanol. 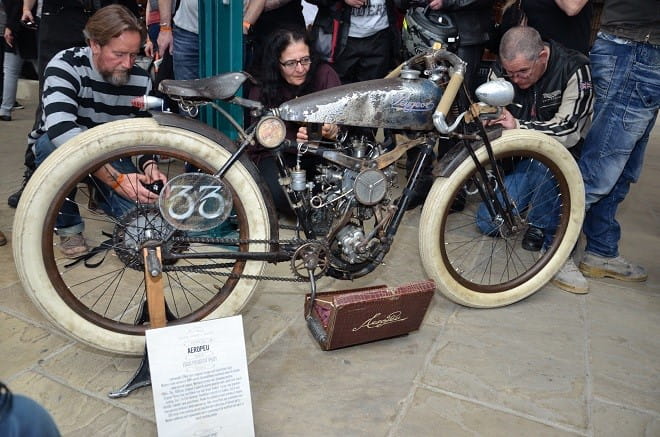 The two big influences on style are dirt track and cafe racer. Dirt Track Riders UK, who run the UK Flat Track race series, had three pukka racers on show. Two were Rotax powered while the third was a pre-Hinckley Triumph twin. All three were displayed fresh from their latest race. Parked outside the bar was a subtly modified and well used Honda CL77, one of the original 305cc street scramblers first made in 1966. The movement does not revere stuff just because its old. You will not find arguments about the exact type of nut used on the correct bracket going on here. The Bike Shed has its roots in the past but its outlook is modern and practical. 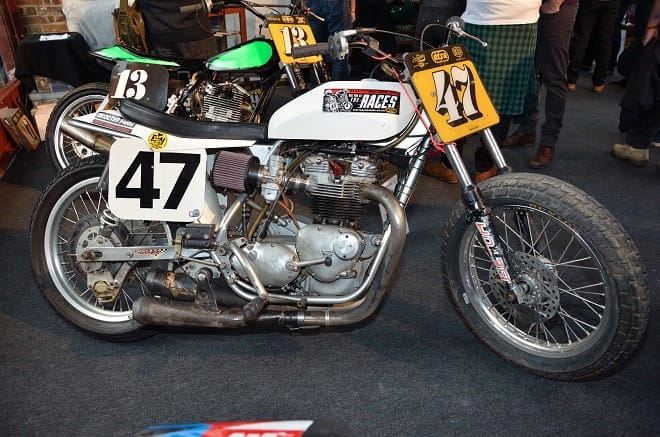 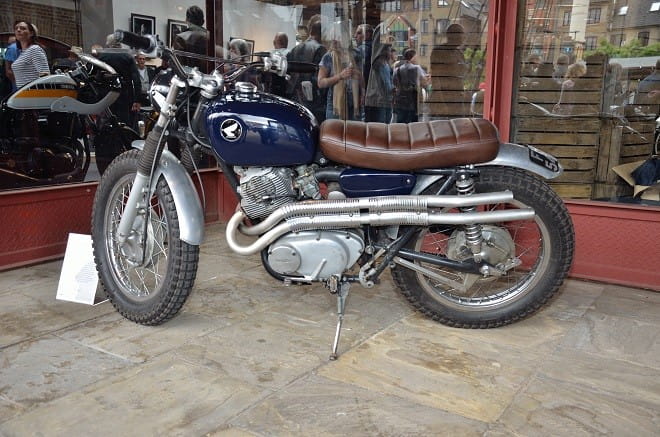 BMW’s flat twins make a popular starting point for cafe racers. One of the neatest in show was the bright green R100 offering from Side Rock Cycles, featuring an immaculate paint finish and ultra-fancy carbon fibre wheel rims. 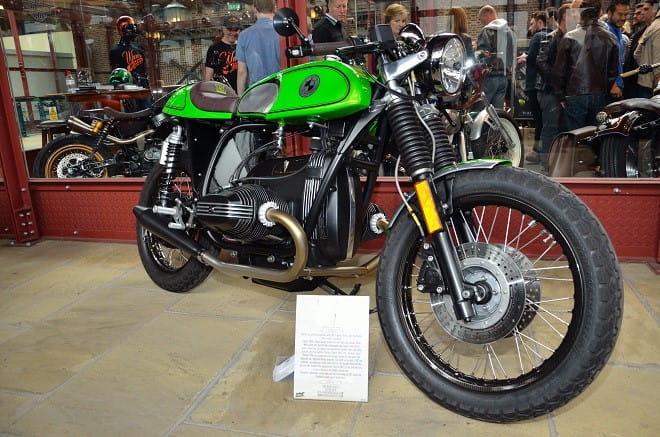 Equally eye-catching was a throwback composite, with that old stager, a Honda 750 sohc four pot, wedded to a replica Wideline Norton Featherbed frame and running a VFR400 single sided swingarm. 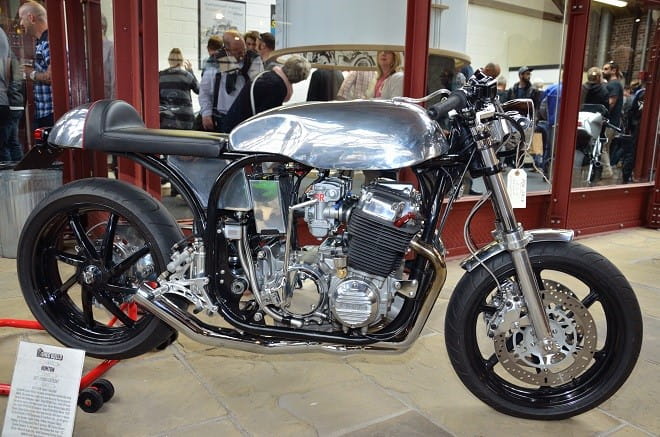 Finish is a matter of personal preference, ranging from the artfully scruffy to the “Touch me not” immaculate, each mode as acceptable as the other, with some true rats for good measure. There were also plenty of machines showing the signs of daily use mixed in with the show ponies.

Outside in the parking area bikes came and went all day, the riders’ clothing and rides as diverse as the exhibits inside. It was worth taking a wander up and down the line every so often to see what was freshly arrived. Shortly after the appearance of a properly ragged Meriden Triumph rat, a guy with a massive beard, puffing on a pipe, headed for the exit on a Suzuki SV650. Like Dutch said, it’s the people that make it special.

Bike Social's Michael Mann was on site for the press launch on Friday evening when Ducati, Triumph and Yamaha each unveiled their own specific customised bikes proving the once underground and back street trend is quickly gathering mainstream and needless to say commercial popularity.

Ducati used the occasion to whip the covers off not one but six special customised Scramblers; four from UK specialists and two more from Italy. Each with its own commissioning story and influence. IDP Moto acted under the guidance of one Carl Fogarty MBE to create the Urban Jungle while Pirelli and Ducati collaborated with Vibrazioni Art Design to produce the SC-Rumble. 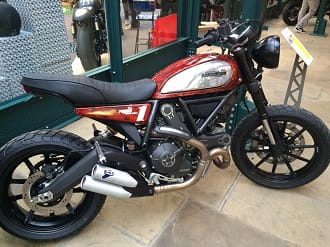 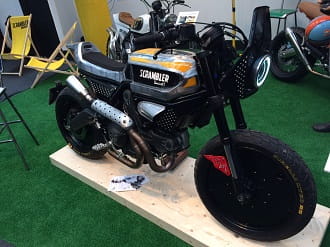 Meanwhile, Yamaha expanded their 'Yard Built' line up with two new models making their debuts at The Bike Shed Show; 'Playa del Rey' is based on an XV950 and was built by Matt Black Custom Designs who were making their first Yard Built project and pays tribute to the board track racers of 100 years ago.

The other newbie is from Portuguese custom builders roCks!bikes which celebrates the 20th anniversary of the XJR1300. 'Dissident' began life as a 2015 XJR and its customisers used no form of cutting or welding but amongst the additions and amends is the monocoque which runs from behind the triple clamp to the rear of the bike encompassing the fuel tank and seat unit. YZF-R1 upside down forks and a beautiful handmade 4-2  stainless steel exhaust. 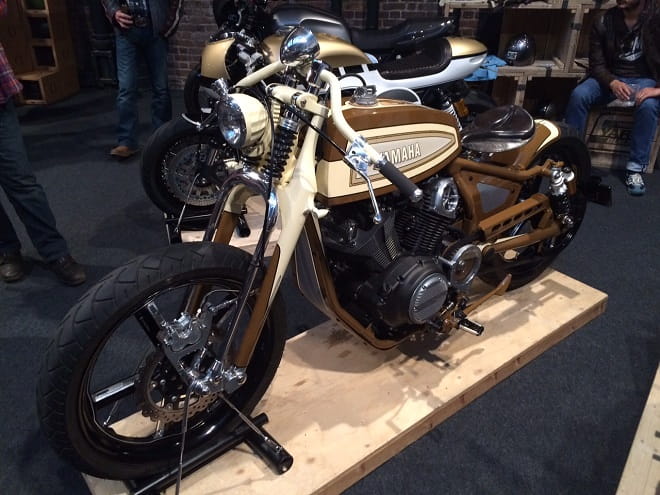 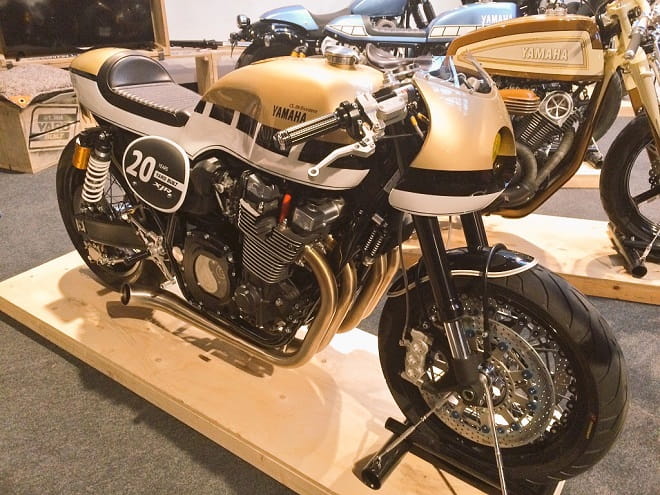 Triumph is the events' main sponsor and they took the opportunity to tell the world about their collaboration with Barbour by launching a new clothing range by also unveiling a one-off, special edition custom street tracker Bonneville. The bike was created by Triumph's own in-house team who only last year divided into two teams and each took a Bonneveille to transform into a Scrambler and a Cafe Racer. 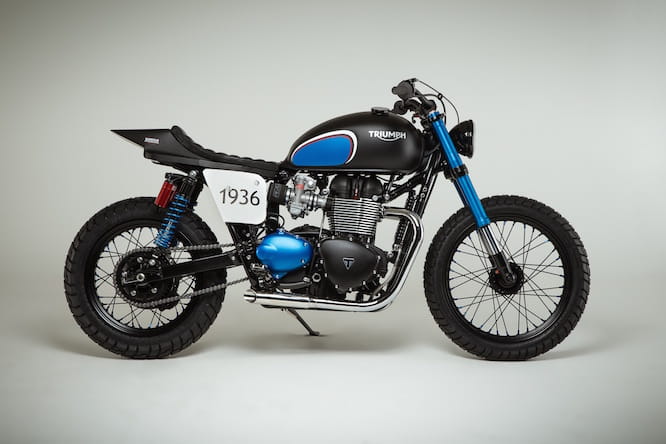 Check out more at http://thebikeshed.cc and make a date for next year.

Were you there? What was your highlight?