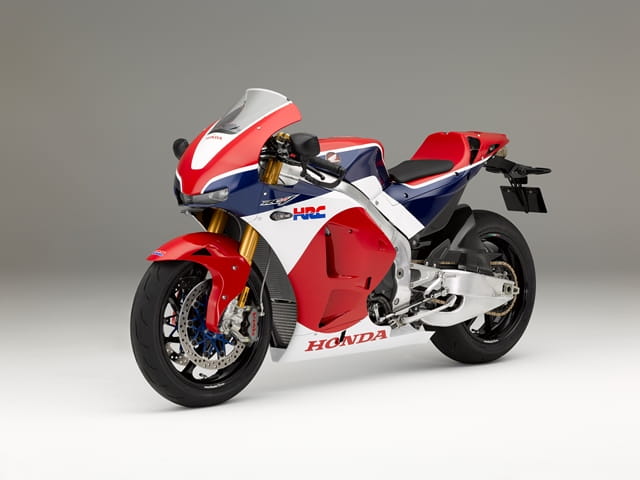 Once described as an RCV with lights, Honda have finally revealed the world’s most exciting road bike – a street-legal replica of the MotoGP race bike. Its name is the RC213V-S and it can be ordered from as early as next month.

Prices for the UK have not been confirmed and according to a Honda source are unlikely to be until the date from which the bike can be ordered; 13th July. However, in Euros for the German market, Honda have confirmed the price will be €188,000 (c.£138,000 at today’s exchange rate). The RC213V-S will only be available in Europe, USA, Australia and Japan and applications for order entry will begin at 00:00 CET (same as British Summer Time) on 13th July via the following website: http://www.rc213v-s.com/

The finished production bike is powered by a 90-degree V4 engine and is based very closely to the MotoGP race machine which has won consecutive championships in the hands of Marc Marquez. And just like Kawasaki and Yamaha have produced track versions of their current high performance road bikes, Honda will offer an optional sports kit for track use only. Dry weight is reduced by 10kg down to 160kg and power is increased taking the 157bhp at 11,000rpm to over 212bhp at 13,000rpm. 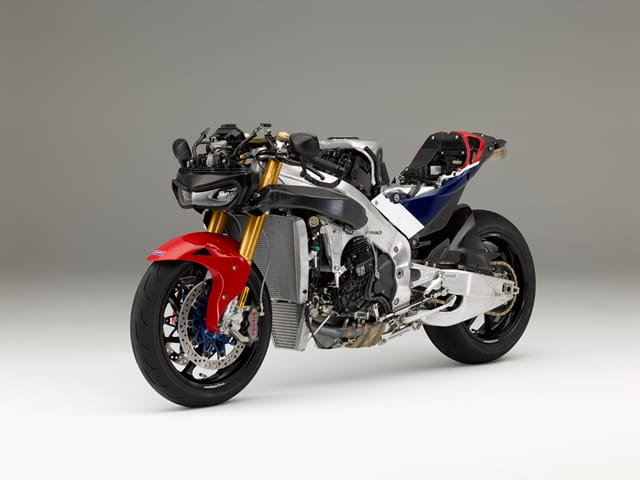 Honda have gone to extraordinary lengths to create a MotoGP bike for the public roads and stated, “To achieve the specifications that make the RC213V-S eligible to run on public roads, the minimal amount of necessary changes and additions has been made compared to the RC213V.”

Apart from 80-odd bhp, the main differences  between the RC213V and the RC213V-S are very simple to list:

And while it seems odd to see a side stand on a MotoGP bike, the other additions to make the RC213V-S road legal as well as noticeable parts are: 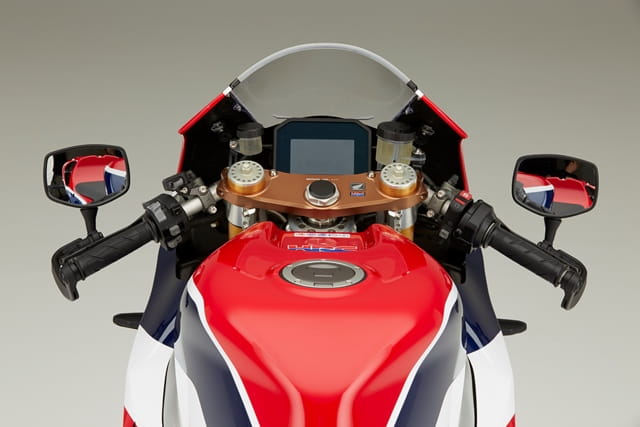 We’re 15 years on since the last RC designated road bike was presented by Honda, the only RC with a V-Twin engine, the VTR1000SP1. The bike was built to compete against the formidable Ducati V-Twins in the World Superbike Championship and were badged by Honda as RC’s. That gave them the kudos to sit alongside the great RC30 and RC45.

Every race bike from the hallowed HRC plant are built to the same HRC ruling – they must be reliable enough to run flat-out for eight hours before an engine change. The ruling is a historical HRC legacy so race bikes could race and win the Suzuka 8-Hour if required. This new Honda road/track bike will run much longer than that though.

The new RC213V-S is the first MotoGP-inspired ‘replica’ since Ducati’s V4 Desmosedici RR was launched at a price of £42,000 back in 2006. 1500 of them were built. Like the NR750, RC30, and RC45 from the HRC stable, the Desmosedici RR quickly achieved cult status and is a collector’s favourite today, with prices fetching more than new.

The stance of the RC213V-S producing such a wide variant of power in standard or race trim seems to duplicate that of Yamaha’s when they produced a race homologation YZF-R7 in 1999.  A limited run of just 500 units were built in order to compete in the World Superbike championship and Suzuka 8 Hours. It had a 749 cc, 20-valve inline-four engine DOHC engine producing 107bhp or 139bhp when the other, unused bank of fuel injectors was activated yet over 162bhp in race trim.

Honda's RC range for the road; a brief history

RC30 (VFR750R): The legendary homologation-special Honda V4’s were built between 1987 and 1990 by HRC with the sole purpose of winning on the racetrack. They quickly became one of the most successful race bikes in history and assured their iconic status.

Place your orders. Will you be investing? Is it a bike to ride or to keep while it appreciates in value?