Government to roll out CBT changes from December 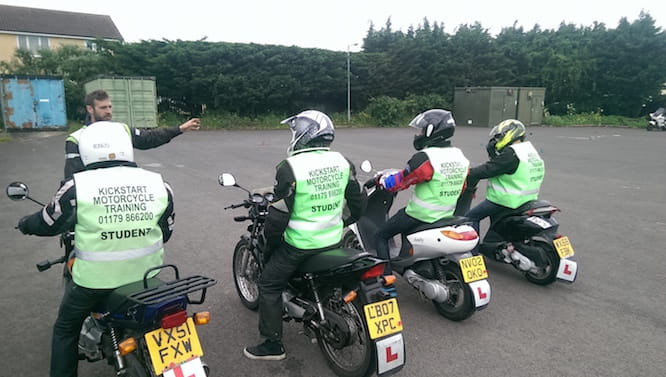 The Government is set to roll out proposed changes intended to ‘improve’ Compulsory Basic Training (CBT) over the next 24 months.

The first changes will be seen as soon as this December, with a number of other improvements to be implemented across 2016/17.

Last December, a report commissioned by the Department for Transport into the effectiveness of CBT courses recommended a number of changes be implemented in order to make motorcycling safer for new riders.

A proposed plan was then outlined in March this year for public consultation over the following months.

With the results of the consultation now in, the Government will begin to roll out the proposed changes later this year.

As the law stands, CBT can be taken from 16 years old and once passed, a rider can ride a motorcycle up to 125cc on the road unaccompanied with ‘L’ plates for two years (limited to 50cc for 16 year olds).

The changes come after statistics showed there were between 7,000 and 8,000 road collisions involving motorcyclists or moped riders aged 16-26 each year from 2009 to 2012. 58% of these incidents involved riders aged between 16 and 19.

The changes cover a number of key points designed to improve CBT with the eventual aim of making young riders safer on the roads. The current changes will be made without the need to alter legislation, meaning some of the initial report’s tougher suggestions, such as introducing a mandatory theory test, have been put on the backburner for now.

The Driver and Vehicles Standards Agency (DVSA) has highlighted eight steps to be taken over the next 36 months to implement the changes:

1.     In conjunction with the training industry, develop training materials to help trainees ensure they can obtain appropriate theoretical knowledge before starting the CBT or as part of the CBT course (Roll out from April 2016)

Concerns were raised over the lack of theoretical knowledge displayed by riders completing CBT. Initial reports suggested the Motorcycle Theory Test, which is taken before the Module 1 and Module 2 practical elements of the full bike test, should be introduced before CBT. However, the DVSA has opted against this as they want CBT to appear as a progressive step towards motorcycle training, rather than an ‘end’.

Instead, new training materials will be released ensuring a candidate knows exactly what to expect from a CBT course and obtain the necessary knowledge before they undergo CBT or even as part of the course.

The DVSA is keen to abolish the attitude that CBT is a one-day course with a guaranteed pass. To do this they plan to better educate candidates about what to expect from a CBT course, starting with improved and updated web content.

There is currently very little in the way of ‘quality’ checks for CBT centres, by including CBT in the National Rider Training Standard the DVSA hopes to be able to maintain a consistent quality of CBT courses across centres.

This will encourage trainers to operate in a modular approach and move away from the perception that CBT courses are done over one day. The DVSA is keen to move towards a client-centred training approach, with courses giving trainees as much time as they need, including emphasising that the two hours road riding is a minimum. An independent riding element may also be introduced.

This will also push for centres to agree to not continuing with training should a trainee not show the appropriate levels of theoretical knowledge.

In line with point four, the DVSA will introduce unannounced checks on centres to ensure they are operating in line with the National Rider Training Standard. Currently, there is no quality assurance testing for training centres.

5.     Make changes to the CBT certificate to reflect a course undertaken on an automatic machine and recommend that riders take further training if they want to ride a geared motorcycle (Roll out early 2016 subject to stock levels)

One major issue highlighted by the review was that should a trainee take CBT on a twist and go motorcycle they were entitled to ride a geared motorcycle without the need for further training.

While this can’t be changed without legislation, in the short term the DVSA will advise automatic-only CBT trainees to seek further training should they wish to ride a geared motorcycle.

6.     With input from the training industry, develop an earned recognition scheme to highlight those trainers who consistently deliver high quality training (Roll out end of 2017)

In line with above.

7.     Explore how post-test training can be better promoted and delivered (Roll out April 2016)

In order to get more people on two-wheels, the DVSA is keen to promote CBT as a ‘step’ of motorcycle training as opposed to an end. One thing considered was making repeat CBTs only valid for one year to encourage riders to take the next stage of their training, but nothing on this has been mentioned in the latest plans.

8.     In the longer term, explore opportunities to introduce legislative changes to the instructor qualification process to facilitate a separate down-training qualification. This may also provide an opportunity to consider other amendments to regulations, for instance a training route to progressive access, possible changes to the content and structure of the CBT syllabus and restricting riders who complete CBT on an automatic machine to riding only automatics.

Long term changes are still being looked at. This includes introducing a more enhanced instructor qualification process. At the moment, a trained instructor can down-train another instructor to conduct CBT.

Further legislative changes, such as the structure of the CBT syllabus and restricting riders who complete CBT on automatic machinery to automatics will also be considered.