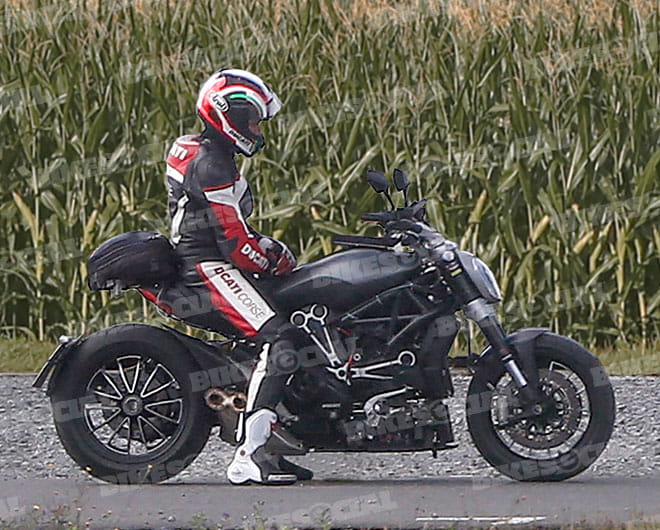 Spotted testing in Italy, these photographs of a brand new Ducati Diavel show many shared components with the existing model.

However, what stands out is the all-new frame, smoother fuel tank, re-routed exhausts, rear shock position, reshaped seat, a higher degree of steering angle, footpegs further forwards and… the drivetrain has been changed from chain to belt-drive and that will mean a brand new swing arm. Not necessarily what you see here because this is very much a prototype-looking part.

The bike which uses the motto ‘Don’t call me a cruiser’ looks set to become a lot more cruiser with these amends. It could point to an approach to an alternate audience given the maddest and baddest Ducati to come off the production line has hardly been a top seller since its launch in 2011 and revisions for 2014.

This new approach risks alienating existing Diavel riders who are fans of the thunderous performance and improbable agility but this new version is certain to appeal to those looking for equivalent power in a more relaxed riding position. That should appease the American market although a 1200cc motor, which adorns the current model, might not.

The existing Diavel uses an 1198cc, V-Twin Testastretta 11° Dual Spark engine producing 162bhp of power and 96 ft-lbs of torque and encourages the rider into a sportier position than its size should allow with the knee angled sharper than 90°. The foot pegs are located beneath the front of the seat while on the spied photographs we can see the test rider stretching his legs further forward. 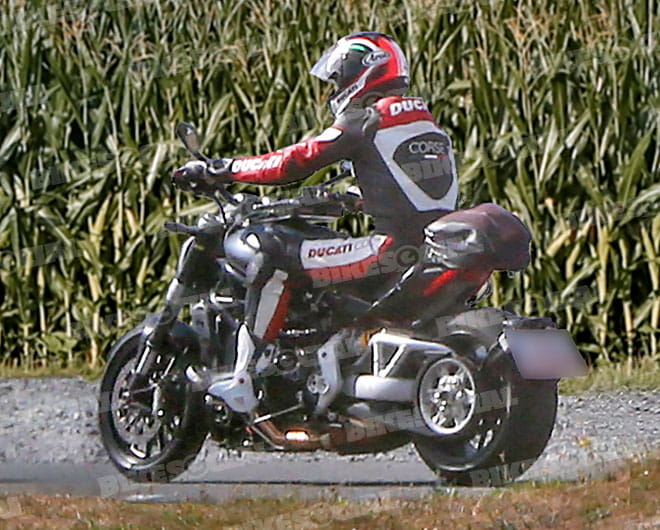 We can fully expect to see the motor featured in 2015’s new and improved Multistrada, a brand-new 1198cc liquid-cooled, DVT (Desmodromic Variable Timing) Testastretta, in the new Diavel given its matching performance, improved efficiency and Euro 4 compliance. It remains to be seen if Ducati can stretch it to 1300 or 1400cc and therefore improve torque figures.

Emissions certificates for 2016 show the existing model range of Diavel, Diavel Carbon and Diavel Titanium as having no engine changes and being compliant with Euro 3 emissions, in fact very close to being Euro 4 compliant which becomes mandatory at the end of 2016 and relate to carbon  monoxide and hydrocarbon limits. We therefore understand this model will not be shown at the Milan Trade Show toward the end of the year and in fact will be developed and tested further in line for release during 2016 as a 2017-oriented model.

The current Multistrada has selectable rider modes which adjust the amount of power, fuel maps, traction control and amount of ABS. It offers a maximum power of 160bhp at 9500rpm and 100.3 ft-lbs of torque at 7500rpm as well as semi-active suspension, all of which can be expected to make the transition into the new Diavel.

The frame appears to be based on the Monster 1200 style of using he engine as a fully structural part while the existing 2-1-2 exhaust appears to have been re-routed around the other side of the bike which ties in with the new rear shock position. Rather than the under-slung version on the current model, we can see this one mounted horizontally on top of the swing arm allowing for the space in front to be used for a silencer/catalytic converter. In turn this negates the requirement for big end cans.

The current Diavel is available from £14,395. Click here to find your nearest Ducati dealer.