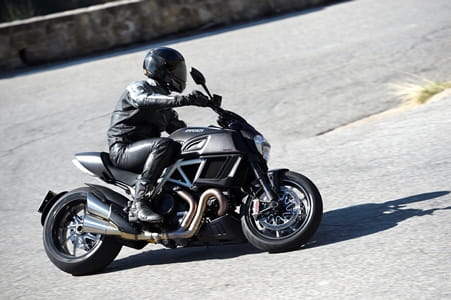 It’s easy to see why Ducati chose Monaco as the launch venue for the revamped Diavel Carbon. The tiny Mediterranean principality is teeming with super-yachts, Lamborghinis, Bentleys and stick-thin women with miniature dogs on leads. A muscular cruiser is ideal for making an impact on the cramped streets. But with twisty, traffic-free roads of the Alpine foothills near by, you need a bike with horsepower, handling and brakes.

The Diavel delivered all those things on its launch three years ago, and for 2014 it’s revamped with tweaks to styling, engine and more. The powerplant is a reworked version of Ducati’s 1198cc, eight-valve Testastretta 11 degree V-twin. Twin spark plugs per cylinder, reshaped ports, revised cam timing, higher compression ratio and new, slash-cut silencers combine to give more torque below 9000rpm, especially at lower revs. The peak power output of 162bhp is unchanged. 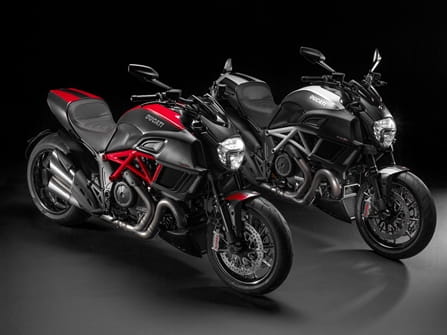 Other mods include a new LED headlight and indicators, reshaped seat, revised handlebar risers, a tiny wind-shield, redesigned air intakes alongside the petrol tank, and the addition of a fuel gauge to the tank-top instrument panel. As before the Carbon version adds some bling, with carbon-fibre tank and seat covers, front mudguard, forged wheels, machined brake discs and different silencers.

The Carbon’s dramatic looks, relaxed riding position and air of power and exclusivity made it ideal for cruising around Monte Carlo. At 205kg dry it’s respectably light (5kg lighter than the standard model), and its seat is wide and low. Its revised engine is very smooth and tractable, too, especially in Urban, the softest of the three riding modes, which cuts output to 100bhp and also adjusts the DTC traction control to suit. For such a big, powerful bike the Ducati was impressively manageable and refined.

But it was up on those mountain roads that the Diavel really showed its class, giving a reminder that laid-back looks can come with thunderous performance and improbable agility. I wouldn’t claim to notice the slight torque increase over the old model, but this Carbon ripped forward from low revs at a gut-churningly rapid rate, especially in Sport mode, whose throttle response is more immediate than the softer Touring. The exhaust’s V-twin bark adds to the fun too. 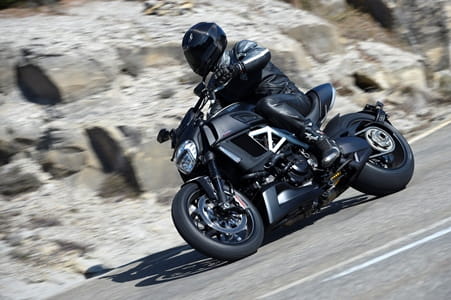 Straight-line stomp is to be expected from a 162bhp V-twin but the Diavel’s chassis performance is good enough to shock anyone riding it for the first time. The long wheelbase, kicked-out 28-degree steering angle and gigantic, 240-section rear Pirelli Diablo Rosso II should make for slower steering than a super-yacht. But the Ducati is remarkably manoeuvrable, steering with a light touch and staying stable even when pitched hard into bends.

It did feel slightly cumbersome when rounding the tightest of first-gear hairpins, but most bikes would have struggled in those. And the Diavel braked as hard as almost any machine on the road, with the help of its Brembo Monobloc radial calipers, big 320mm front discs and excellent ABS system. 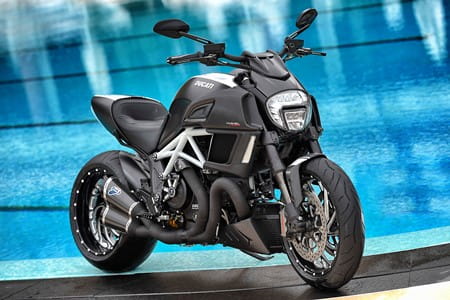 Drawbacks? Well, with hard use on twisty roads the Ducati was gulping gas at worse than 30mpg. Its gearbox sometimes struggled to find neutral, its sidestand occasionally needed a second prod to get it to flick up fully, and at £16,995 (the standard model costs £13,995) the Carbon is far from cheap. But if you want a bike that’s as fast and fun on a twisty road as it’s cool and comfortable in town, this uprated Diavel delivers like nothing else. 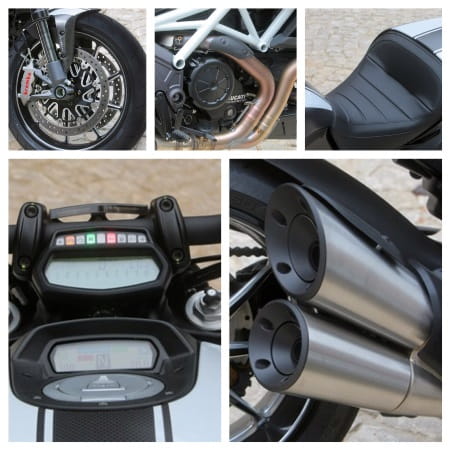