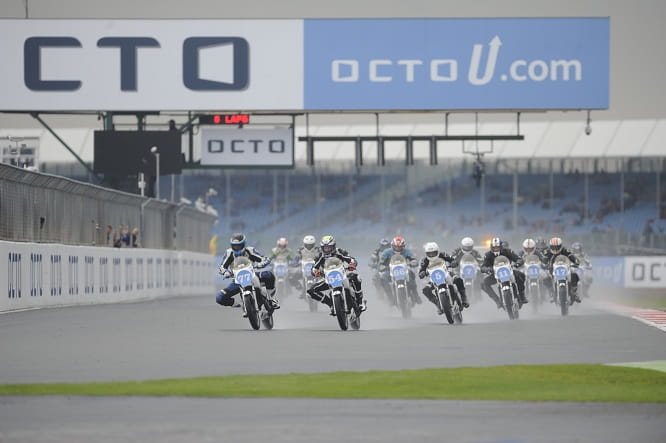 It wasn’t Valentino Rossi’s majestic win or Danilo Petrucci’s heroic first podium. It was, as those who stayed to the end witnessed, the return of the ‘Yamaha Pro-Am’, which saw 24 identical Yamaha RD250LCs from the 1980s go head-to-head in what Niall Mackenzie described as ‘the ultimate school reunion.’

Yes, it wasn’t the fastest, or most exciting race ever seen. With only 20 minutes of practice and a soaking wet track, the ‘race’ turned out to be more of a competitive parade than one of the psychopathic two-wheeled battles that the ‘Pro-Am’ became famous for 30 years ago, but by then the real race had already been run, and man it was the craziest and most intense race that I’ve ever seen.

As Bennetts’ sponsorship manager, I became aware of the project in May, when we were approached by Chris Herring, commercial boss at GP promoters Circuit of Wales. Chris was working with Daryll Young of IDP Moto, who we have known for many years and who built our stunning Honda CB750 show bike last year, on a project that started off as a ‘if only’ idea over a few pints and which would ultimately drive all involved right to the edge, as they brought 24 RD250LCs from basketcases to the grid at the British Grand Prix.

The ‘if only’ was not only to bring back iconic Yamaha Pro-Am from the early 1980s, but to showcase it at the British Grand Prix. After my initial laughter and ‘it can never be done’ response it became clear that they were deadly serious and had already tracked down some bikes from the continent, as well as sounding out some of the original riders from the championship’s heyday. It still seemed a crazy and impossible task, shrouded in secrecy for fear of inflating the prices of the bikes they were hunting, but for all that, we just wanted to be part of it, after all, it’s only the fricking Pro-Am! 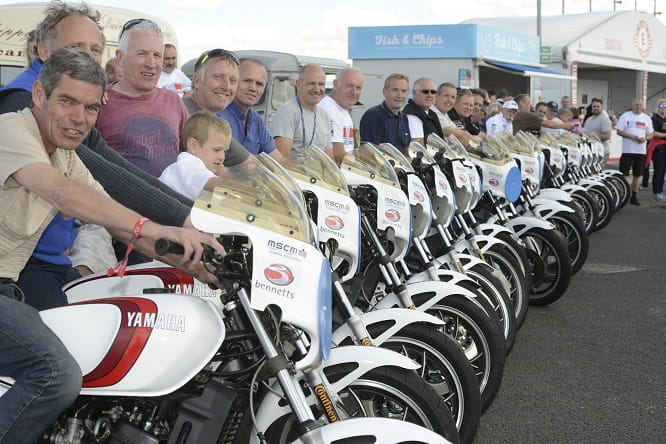 You see, go to pretty much any bike race meet and you’ll see a large chunk of the audience made up with 40+ year old blokes. Blokes like me. Blokes who grew up with an LC story of some kind or another and who remember seeing the utterly insane original Pro-Am on ITV’s World of Sport, or who lived their youth in a haze of LC induced two-stroke smoke.

Now don’t get me wrong, I love modern racing. But get along to a national championship race meeting and beyond the superbikes it’s a vanilla bunch of support acts running around on variously stickered ZX-10Rs and R6s. Personally I find it hard to get excited about the support races. I don’t really enjoy watching sidecars dumping their oil all over the tracks, and surely there has to be something more interesting than a sparse grid of KTM-riding club racers? Retro is the new modern, right? And surely the racing world is crying out for a revival of the Pro-Am?

While the original bikes were RD350LCs (and latterly powervalved YPVS machines) the bikes sourced for the revival were the cheaper and more readily available RD250LCs. All were tracked down in central Europe and none were showponies. In fact, it’s fair to say that if they weren’t iconic LCs, they would almost certainly have had their date with the crushers.

A total of 30 bikes were bought and each bike stripped to its constituent parts, which were then completely restored and rebuilt by Daryll and his apprentice Craig in their workshops on the outskirts of Silverstone circuit. 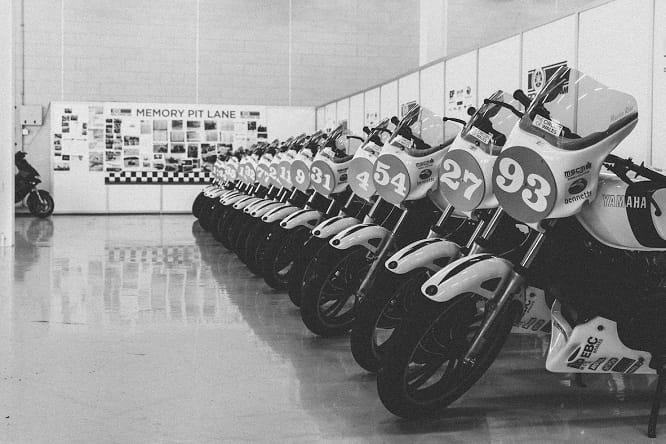 Deadline one was July 14, when we (Bennetts) had an official press launch at the short Silverstone Stowe circuit. Two bikes were prepared, one for show and one runner. Half a dozen members of the bike press put in laps on the rebuilt bike, which literally still had wet paint in some places. The bike didn’t run all that sweetly but no-one was too bothered. The Pro-Am was back. Just six weeks to go…

Just how 24 bikes were prepared in time for the practice session at the Grand Prix was nothing short of a miracle. It would be no surprise if Daryll never wants to see an LC again, but fair play to him for seeing it through and delivering something he should really be proud of.

Half the bikes had been ready for a shakedown test on the Stowe circuit four days before the Grand Prix, but the day had largely been a washout and the first time most of the machines would run in anger was to be Friday’s 20 minute qualifying session. The only track time that the riders would get ahead of Sunday’s race.

As expected, practice was tough with a number of the bikes requiring further setting up, but with 48 hours until raceday, the competitors mucked in to get the machines running far sweeter for Sunday. Some unofficial practice on Stowe on Saturday got men and machines dialed in and looking better for raceday, which unfortunately was cursed with appalling weather. Most problems related to the fuel systems, but with tanks and carbs rebuilt, most were ready to go on raceday. 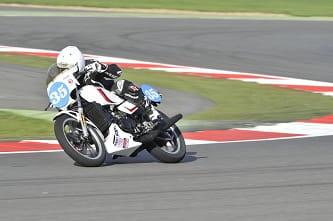 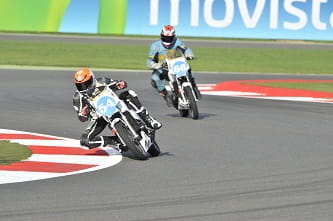 The conditions saw eight riders crash out on the first lap of the five-lap race. Three retired with mechanical difficulties as the rest felt their way around in the treacherous conditions. It was somewhat fitting (and hardly surprising) that Mackenzie won by over 14 seconds. The Pro-Am’s most famous alumni (and massive LC fan) was also heavily involved in the reunion alongside Herring and Young, and remains an active rider who instructs on a regular basis.

Second in the race was Charlie Corner, another regular rider who even purchased a 250LC to put in some track days ahead of the revival, while Ron Haslam school instructor Andy Muggleton was third. It wasn’t just the bikes that were a bit rusty, some of the guys hadn’t ridden, let alone raced for over 20 years. In reality, this field of 50+ year old competitors was never going to serve up the headbanging display for which the Pro-Am was famous, and one 20 minute qualifying session was certainly not enough preparation for man or machine.  Despite that, all were thrilled to get back into the leathers – and at a round of MotoGP too! 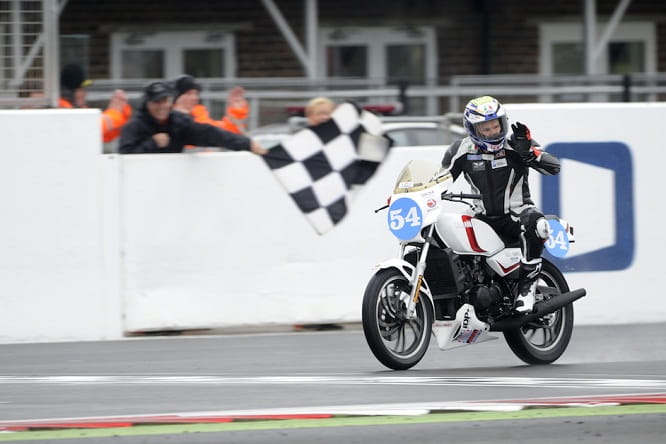 It is a shame that the Pro-Am revival had its teething problems in public, but now those initial niggles have been eradicated, the structure is there for a fantastic and sustainable race series that really resonates with the British public. The organisers ensured that the spirit of the original 1980s series was adhered to. Yamaha MotoGP boss Lin Jarvis, who started out his career as a mechanic in the original series, pulled keys out of the hat to randomly allocate bikes to the riders, while the 1981 prize fund (£500 for first, down to £10 for 11th) was replicated and handed out in envelopes during the post race ceremonies, while Yamaha Music also pitched in some prizes for the top three. Rumours of Stannah stairlifts and Saga holidays getting involved next year are so far unsubstantiated!

There was a lot of affection shown towards the revival and the plan is to expand the ‘Pro-Am’ next year, as a support class at quite a few races across Europe. As Mackenzie said: “It’s been the ultimate school reunion. We sat on the MotoGP grid and went out there to put on a show. I know that there was still a lot of competitive spirit out there and certainly I sat on the grid saying to myself ‘I’m having this!’ We’ve seen a lot of camaraderie and team work this weekend. Daryll and the team had undertaken a massive job. Everyone got stuck in to make it happen and hopefully now we can make it bigger and better for next year.” 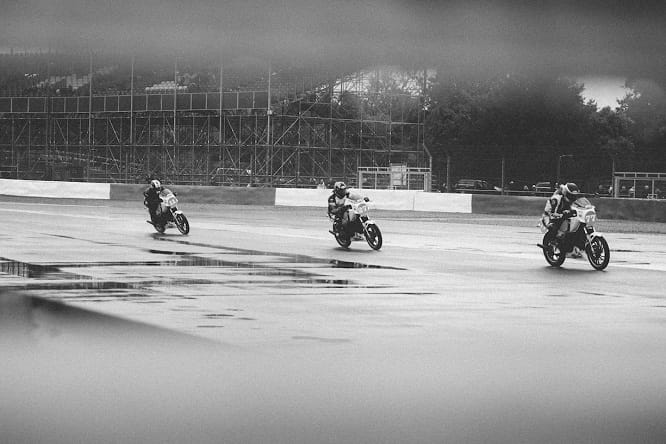 With the bikes and riders back up to speed next year, there’s no reason why the on track action can’t match the interest off it. The racing at Silverstone may not have been sensational, but the sight, sound and memories from a golden era of motorcycle racing made a lot of people very happy last weekend. And that’s what it’s all about, right? 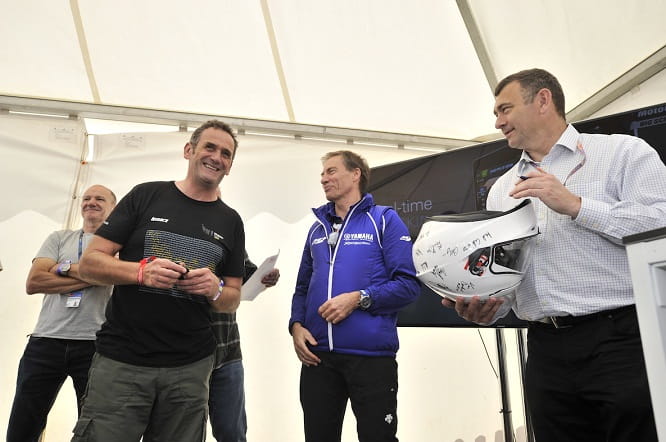 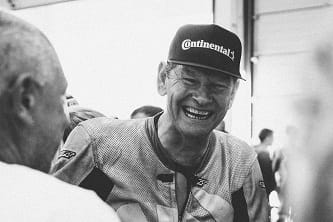 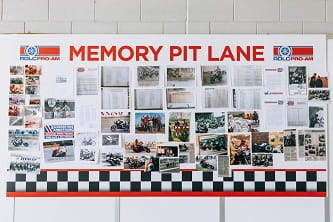 Where you there to witness it?!  or !