Few of today’s motorcycle racers are as experienced as Australian Steve Martin. The former World Endurance Champion, who had been competing with the Yamaha Monster Energy World Endurance squad until his retirement from racing this year, began his Superbike career with a wildcard ride in the 1988 World Superbike Championship, before joining the Australian Superbike series in the Nineties, and then going back to the World Superbike Championship full-time in 2001. 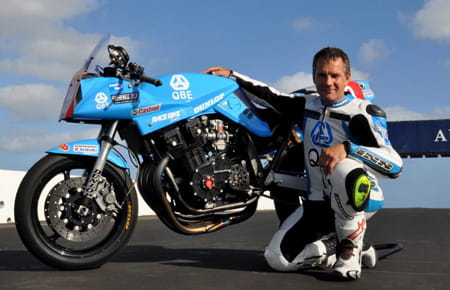 Although no longer racing himself, Martin is still heavily involved in motorsport and now commentates for the V8 Supercars, MotoGP and the World Superbike and Australian Superbike championships. We caught up with him after the recent Bol d’Or endurance event to find out what it takes to be an endurance rider and how he made the transition from track to TV.

Several riders use the same bike during an endurance race. How do you cope with the compromise on set-up?
There is a huge compromise on set-up, but the one thing endurance racing has taught me is that I’m pretty much an ‘average rider’. If I get a bike that has a good base setting then I’m happy – it’s always going to be an impossible ask to get the set-up 100% right for any one individual rider when you’re competing in a team of three. But that’s one of the things that makes endurance racing challenging! When I was racing Superbikes, I had to have my brake and gear levers set exactly right, I had 100s of ear plugs and five helmets ready to go, but in endurance, you can’t worry about the small things.

All teams and riders will have different strategies going into an event, but despite what everyone else is doing on track, concentration levels have to remain extremely high. How do you remain focussed?
On the first [practice] day I would ride as many laps as I could to try and wear myself out and get my muscles ready and pumped up. That was my training. From then and up until the start of the race I would do as few laps as possible so that I could save myself for the main event. I think one of the most important things is to get a good night’s sleep before the race.

During the race you get off the bike and go to the back of the truck. Although there is a place for you to lie down and have a rest, there are people coming in and out all the time, showering and talking. Plus, you have to get up 30 minutes before you go back out, so it’s hard to cope. The last race I did, I was awake for 24 hours, but because I was used to it, it didn’t bother me!

Non-professionals can enter endurance races so the track can be, at times, even more challenging than usual. How do you maintain pace when there are other unpredictable and often slower riders on track?
It is a lot more difficult than I think a normal rider can imagine, not just physically but mentally too. The mental aspect of it is that you're passing on track all the time, and you can’t hesitate – if you do, you’ll lose a lot of time. The top guys are fast – they're national champions. The time difference between the top guys and the slow guys is incredible.

At least a third of the field are hobby racers who race for fun, and it does make it difficult when you're out there on track with them. It can become very challenging and there have been accidents in the past where some of the fast guys have collided with some of the slower riders. You really just have to take your time, be smart and don’t overtake on the outside. You just have to use your experience.

Who is your racing idol?
I am actually in awe of the talent of a lot of different people! When I was growing up it was people like Kenny Roberts and Barry Sheene. Then there’s Eddie Lawson, Kevin Schwantz and more recently the likes of Valentino Rossi and Jorge Lorenzo. I just appreciate somebody demonstrating an extreme amount of talent on a motorcycle. When you see someone doing something that you can't do, you can’t help but be impressed. When you see someone riding in the zone and on the limit, it’s impressive.

After retiring from the World Superbike Championship, your career was restarted when you became a test rider for a number of different motorcycle manufacturers. Today you are credited with developing many of the components that some of the world’s best riders use. What are you the most proud of?
I’m proud of many different things. Most recently I have been known to do a lot with BMW but in the past I have also worked with Ducati on a superbike project – the 999 – which won on its first time out with Troy Bayliss. I was involved with the PETRONAS team too, which although never experienced massive success, I always thought the machine – a 900cc triple – was hugely successful.

Hearing that the BMW was only running on three cylinders when it won at Aragon recently was a massive achievement for me. I had been working on the bike a lot so to hear they were using that was quite a buzz. I also had a bit of input early on to the electronic suspension that Sylvain Barrier used recently on the BMW HP4. Just to see that bike win as well is probably one of my highlights.

What is involved in being a test rider?
The job of a test rider is pretty simple really. It’s not a test rider’s job to push the bike to the absolute limit – like the lap times that Marco [Melandri] would do, for example. The test rider’s job initially is to give their opinion on various motorcycle components. For example, a race team might come to a test with five different swing arms and it would be the test rider’s job to say whether they were any good, and which should be tested by the riders themselves. We narrow down the choices for them.

Electronics-wise, it’s just about whether the strategies are right or wrong. There are hundreds of people involved with the electronics programmes on a motorcycle and everyone has their own ideas. The test rider’s job is to get the bike working as best they can. Whether it be traction control or engine braking, a test rider’s job is to give the rider a package he can knock into his own shape. You never really give a finished product to the rider because every rider wants something different. But you can give a rider something that he can ultimately make his own.

Future plans?
Now that the season has started, I’m never really in one place for too long! Over the past few weeks I’ve been commentating for the Australian Superbike Championship in Tasmania, and then I was at Aragon a couple of weeks ago for the World Superbikes. I’ve just been to Texas for the MotoGP and most recently we went across to the Netherlands for the Superbike race at Assen. Let’s just say I’m keeping busy…