The origins of motorcycle racing 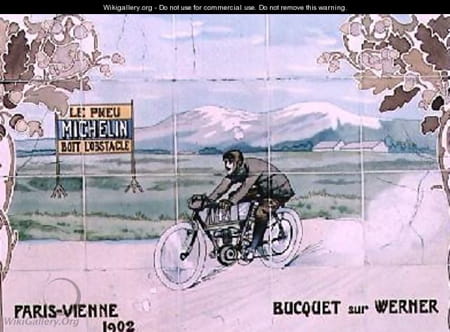 We tend to take our sport for granted nowadays – by the time the lights go on at Losail to signal the start of the 2014 MotoGP season at the end of March, the club racing scene will already be in full swing. But how did racing as we know it today actually come about?

In or around the 1890s, the internal combustion engine was being considered to power the new-fangled motorcycles, though they were three wheelers, and there are reports of a race between a pedal-powered bike and an engine-powered bike in the UK in 1897.  While on the continent, a Frenchman named Bucquet took part in a number of endurance events such as the Paris-to-Milan while the Parc des Princes in Paris was hosting races on the banked cycle-track in 1904. Back in the UK, the Canning Town velodrome was establishing itself as the place to enjoy the racing.

The French “Coupe Internationale” of the same year was contested by teams of three riders from five countries, including Britain, whose governing body, the ACU, was among those calling for an international commission. In the days after that race on 21-22 December, the FICM (International Federation of Motorcycle Clubs) was formed in Paris.

Racing was gathering momentum and in 1906 at Patzau, a race bearing the title “Grand Prix of Europe” was held, with ten riders bidding for honours, though only four finished with Nikodem riding a Puch and winning with an average speed  of 47.8mph.  The Isle of Man TT was born the following year with Rem Fowler and Norton victorious while Brooklands, the world’s first purpose-built circuit, was attracting the speedsters with Charlie Collier, the founder of Matchless, claiming a world speed record.

The sport was lifting off in the UK and with it the development of the machines for which gearboxes were now an essential feature – especially for those tackling the 33-mile long course over Snafell in the Isle of Man which was being used in 1911.  British riders were to the fore, the dominant force in the Fontainebleau GP of 1913, but within a year Europe was engulfed in conflict and the First World War.

It was not until 1920 that the sport returned in any great shape with the Isle of Man TT and a six hours race at Le Mans. A year later Belgium staged its first Grand Prix, and in 1922 the 24-hour Bol d’Or was contested by 17 machines. Monza joined the calendar, as did Avus, Berlin with Germany’s first Grand Prix, and in 1925 the first Dutch TT was held with BSA, New Imperial and Norton powering the winners.

The Nurburgring staged events and works teams were now using races to promote their products with Norton particularly successful – Jimmy Guthrie was their hero, taking charge of the mid-1930s as he won nine consecutive Grand Prix races before being fatally injured in the 1937 Sachsenring race.

Stanley Woods, to many the sport’s original superstar, stopped to help the stricken Guthrie in vain.  The man from Dublin had everything, speed, skills, tactical know-how and he took racing by storm, riding various machines, among them DKW and Moto Guzzi, while in 1939 he took a 350cc Velocette to his tenth victory in the Isle of Man TT.

But again, a year after the formation of a European Championship, racing was on the back-burner, the Second World War concentrating the minds, and it was to 1947 before the sound of racing engines would be heard in earnest. The European Championship did not re-appear, resulting in the FICM deciding to create an official World Championship in 1948. That was the starter for the racing we enjoy today!