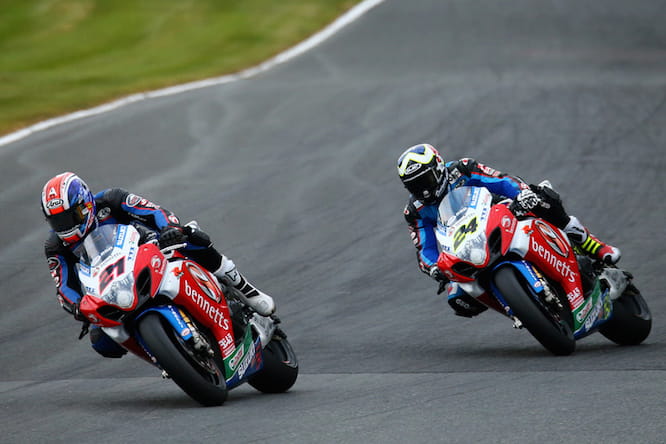 We’re in the middle of the first England vs Australia Ashes test, and while cricket may not be a sport that gets the pulses racing quite like bike racing – the banter can be brilliant between the English and Aussies.

We thought we’d put an Englishman vs an Aussie in a classic bloke test to see who would win, and where better to start than Bennetts Suzuki duo Christian Iddon (for England) and Josh Waters (for Australia).

Let’s see how they got on…

As this is loosely cricket themed, have you ever played?

CI:  Yeah, but really badly. I’m absolutely shite at any ball sports. I used to play a bit of football, just in the school yard but I was always last to be picked. I was a defensive rock, nobody could ever get past me but once I got the ball I couldn’t do anything with it so I’d just boot it as far back up the other way as I could.

JW: Yeah in primary school. I was useless really, but I guess looking at an English cricket team I suppose I’d be alright.

Bloke points: Both get a point for having played cricket, with a bonus of 0.5 for Josh with the witty (but of course, untrue) comment.

CI: I don’t really have an alcoholic drink of choice because I don’t like drinking, I just don’t like it. I don’t like the taste of any alcohol, so what I tend to do is get as hammered as fast as I can and then I’m alright.

If it’s from a tap it’ll be Stella.

JW: It depends what time of the evening it is. The go to is probably beer.

Bloke points: What bloke doesn’t drink beer? 1 point for both.

How many would it take to get me on the floor?

CI: Oh about three if I drank them quick enough. It doesn’t take many to get me rolling round or fighting.

JW: It depends how hard I hit it really. I’m a cheap date. I think most of the time I’d be happy with six.

Craziest thing you’ve ever done on a bike?

CI: I’ve got a mate who is a tree surgeon, and we had a big pile of woodchip so we decided to make a bit of ramp. It started off with us putting some metal boards against this woodchip and then we got the spades out and moved the woodchip so there was a gap, but then this wasn’t big enough so we got the digger out and made a bigger gap and that was just ridiculous. It got to the point where we were jumping more than the length of the digger, just keeping it pinned. That was ridiculous. It was a big jump.

JW: There’s something I got away with, I thought I was a world class speedway rider and my ambition outweight my talent a bit. There was only me and my mate there, I almost crashed so huge. I almost flipped it but hung on with one hand. I don’t know how I didn’t crash. There was nobody there so I was very lucky. It sounds a bit crap but if you’d seen it, you’d know why I stopped riding like that!  I tamed down my confidence the next time I rode speedway.

Bloke points: Both are cool stories, but Christian’s tale impressed us more, 2 points to England, 1 to Australia.

Most painful thing you’ve ever experienced?

CI: When I was about 14/15 I broke my leg really badly motocrossing. Both of my bones came out of the side of my leg and it was horrendous. It’s hard to describe, it was like my leg was on fire. It wasn’t pain it was more of a burn. You don’t wanna go there, it’s horrible. I had five operations in two weeks to put it right so it wasn’t ideal.

JW: I had a pretty bad crash in 2010 but I was in an induced coma for a week so I had no pain because of the drugs! I broke ribs, had a collapsed lung, bleeding on the brain and 22 stitches in my face.

I think the most pain I’ve ever been in is when I crashed at Cadwell last year, I couldn’t breathe.

Bloke points: You don’t class a broken rib, collapsed lung, bleeding on the brain and 22 stitches in your face as painful? 2 man points to you Josh Waters.

Iddon’s story is graphic and sounds horrific, how he can talk so calmly about his bones poking out of his leg is impressive. 2.5 points to England.

Most embarrassing thing you’ve ever done?

CI: Probably not something I can actually say! There was something that was pretty embarrassing. The first time my Dad went to do supermoto he had a bike that he couldn’t start, so he said if he fell off I had to take the stand to him. He crashed on the first corner.

JW: The first time I went to Japan I thought hello was a certain word, and Yoshimura got us to do this chat show, and I’d just say this word and they’d all laugh. I thought I was doing a great job at breaking the ice but at the end of the two weeks they told me the word meant nothing and everyone was laughing at me not with me! I had no idea. They all thought it was funny, but not so much for me!

Bloke points: If the word Josh had been using was obscene, he’d have won this by a mile but as he was probably just talking gobbledygook, both can have a point here.

It’s a draw this time…