Steve Hislop - The greatest ever all-rounder? 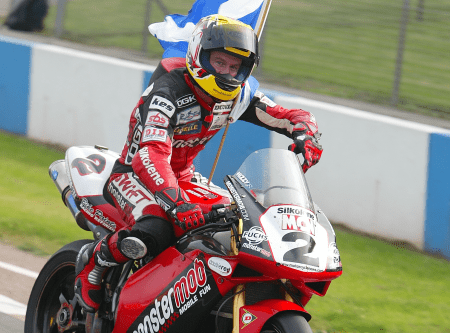 Here is one to get you thinking and maybe arguing about. Who is, or has been, the best all-rounder when it comes to pure road racing and short circuit action?  There are numerous candidates to take into account.

For starters, Joey Dunlop, the undoubted Mountain Master in the Isle of Man; John McGuinness now 20 times a TT winner plus a British 250cc Champion.  Carl Fogarty, four times World Superbike Champion and TT race winner.  David Jefferies a winner wherever he raced, the list goes on, but what about the case for Robert Steven Hislop.

It is ten years since the rider known as the "Flying Haggis" tragically died in a helicopter crash near to his Hawick home and fittingly for a proud Scot his feats were remembered at Knockhill as the Fife circuit staged the fourth round of the British Superbike Championship.

Hislop was two times winner of the British Superbike crown, 250cc British Champion and 11 times a winner at the Isle of Man TT. He also broke the outright Donington Park lap record on a British Superbike specification Ducati, going faster than even Valentino Rossi.

He was a rider of true brilliance who on his day could beat anyone, but he was a man of moods - either on a real high, or plumbing the depths - nothing in between which is why some talk of him being a flawed genius.

His life and career were a mix of triumph and tragedy.  He lost his dad to a heart-attack and then his elder brother Gary in racing accident in a short space of time but he fought back, not without the wholesome support of his mum Margaret who by the way was present at Knockhill to enjoy the races.

He became the first person to lap the TT Mountain Course at an average speed in excess of 120mph and his first victory there came  in the 1988 Production race then the first of two triples in 1989, the next including his famous Senior race victory aboard the "White Charger" Norton came in 1991.

In between times the British 250cc Championship was won, followed in 1994 by winning the two "big-bike" TT races prior to a move into the British Superbike series and title success in 1995. There was no settled base though as he changed teams on a regular basis Kawasaki, then Ducati and on to Yamaha and third place in 1998.

Hislop survived one of the most spectacular crashes ever seen at Brands Hatch, as his bike cart-wheeled four times, some 20 feet in the air at Paddock Hill bend. He suffered a broken neck, though at the time he did not know.  True professional as he was, he returned taking the BSB runner-up spot in 2001 on a Ducati, though it might have one better but for a horror crash at Rockingham.  A year later he was crowned champion for the second time with MonsterMob Ducati, only to be rewarded with the news that his contract was not going to be renewed.

Hislop then returned to Yamaha again although it did not work out, but, typically, he picked himself up and was due to resume racing in August 2003 only for man who had defied death on the track in those big crashes to succumb to injuries sustained in that fateful helicopter crash.