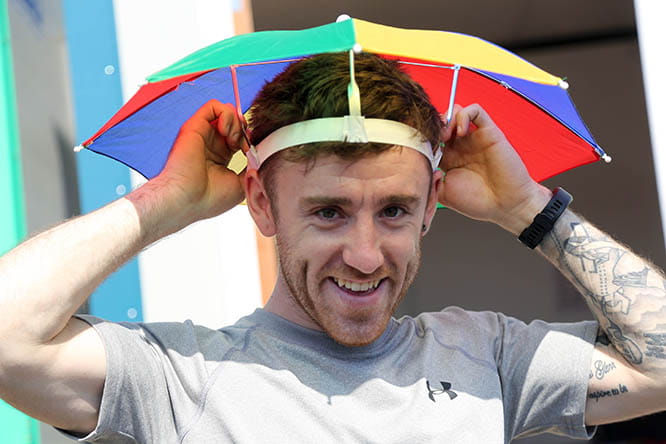 Northern Ireland’s Lee Johnston is heading into this year’s Isle of Man TT keen to build on a successful 2015 which saw him take two podiums in the Supersport and Superstock races.

The diminutive Ulsterman may be one of the smallest riders to take on the TT course, but that hasn’t slowed him since making his debut in 2012 as he’s proven himself as a contender on the iconic mountain course.

The 27-year-old is now a firm favourite at the North West 200 after two strong seasons running at the front and is looking to make a similar step forward at this year’s Isle of Man TT.

“I’m fairly simple, each year I just want to go faster than I went the year before,” Johnston told Bike Social. “We’re not a million miles off now, the only thing that frustrates me is that now I’ve been on the podium everyone expects me to go and win now but it’s not that easy, is it?

“The bikes are good and I feel good too, so if I can arrive for the TT fit and healthy like last year we aren’t a million miles away. If we can take some podiums again that would be great and if we can sneak a win that’ll be even better but you can never just say that at the TT, Guy came for 15 years or whatever and never won one so nothing is for definite here.

“It’ll be tough, there are six, eight maybe even ten guys who can win in any class, but we’ll be trying.”

Johnston will remain with the East Coast Racing BMW/Triumph squad this season despite a number of rumoured offers from factory teams including Tyco BMW. The former Junior Superstock champion says he’s happy with the team he’s in and believes that happiness can only make him faster.

“Some people have maybe criticised me a bit for not going to join a so-called factory team, but I don’t know,” he explained. “Three years ago I hadn’t a pot to piss in and I was going to quit racing motorbikes and my boss says ‘Why don’t we go and do the roads?’ and that was it. He’s stuck by me to get me here and I hadn’t won any road races until I did that. The team has made me what I am now and I’d like to win a TT on their bikes for them. In my own head I think I’m in the best team in the paddock, if other people think I’m not that’s their opinion, but I couldn’t be happier. I think that gives you maybe another mile an hour or two that riding in a team where I wasn’t happy wouldn’t give.” 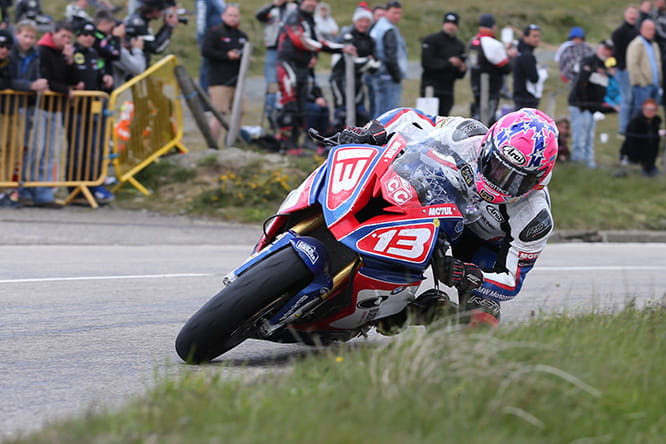 Johnston’s height puts him in a difficult position around the TT course, particularly on the 200bhp+ 1000cc bikes which has led to some people counting him out of success in the Superbike and Superstock classes. However, after taking victory on his stock BMW at the North West 200 and finishing on the podium in last year’s Royal London 360 Superstock TT, Johnston has shown he’s not just a small-bike man.

“Everybody usually counts me out of the big bike races, or they did until the Superstock podium last year. I’m really enjoying riding the BMW, it suits me well but that’s a credit to the team. I’m so small so I can’t really muscle it so it has to be perfect for me to put in a good time. Last year to get on the podium with it was a huge achievement.

“Being small doesn’t help. What the likes of Cummins, Hickman and McGuinness can do with just their weight in terms of moving the bike is something I don’t have. I’m 64kg so I do not have the weight or the leverage so every time I push the bars I’m pushing with whatever I’ve got to get that resistance so I just have to be loads fitter than everyone else. When God was giving out height he just missed me out! It’s handy for buying clothes though, I can still buy kids clothes so it saves me a bit of money, but it’s not good for riding motorbikes! It’s not so much of a problem at the Ulster or the North West but at the TT it’s very physical.”

To combat the weight disadvantage, Johnston has a strict training regime but unlike most riders he isn’t afraid to admit that he hates going to the gym.

“I train hard. I have a good trainer who looks after me – Brad Howell, who runs a company called Phuelled. I know everybody thinks I’m a bit of a laugher and a joker but I know full well that I can’t be at the front without putting the hard work in.

“I don’t enjoy it. I hate going to the gym. Who wants to see tanned men walking around with vests hardly covering their nipples? It’s not exactly the most fun thing to do but it’s something I have to do. Everybody has to do things they don’t like to do and mine is going to the gym!”

It's going to be a busy TT week for man known as 'The General.' As well as competing in the Superbike, Senior, Superstock and Supersport TTs for the East Coast Construction squad, Johnston will be run for the Belgian Sarolea squad in the electric powered TT Zero race, an event in which he finished third with Victory Motorcycles last year.

Follow Lee Johnston's progress along with all the other Isle of Man TT news, reviews and features here at Bike Social.