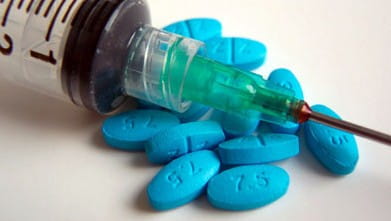 The FIM has recently announced that Lauris Daiders, a Sidecar Motocross passenger at World Championship level is provisionally suspended from the sport after failing an anti-doping test pending the FIM’s International Disciplinary Court deciding upon action.

Following this, we thought we’d take a quick look at doping in motorcycle racing, which is actually quite a rarity. Or at least, it’s a rarity that racers have been caught doping. The most famous case in the world of motorcycling has to be Noriyuki Haga, who missed out on the 2000 World Championship after testing positive for the banned substance, ephedrine. Although, Haga wasn’t really doping – ephedrine occurred naturally in a herbal supplement the Japanese racer had been taking. Intially, Haga was handed a one month ban with points from the South African races deducted however after appeal, the points from Race 1 were re-instated and the ban reduced to two weeks. This was enough to see Haga out of the title fight.

Another famous case of doping in racing was Anthony Gobert, who ended up being kicked out of most series he’d raced in due to substance abuse, and not of the performance-enhancing kind, so perhaps an anomaly in regards to this topic…

More recently, Australian Moto2 rider, Anthony West was banned for one month after testing positive for Methylhexaneamine in late 2012.

Riders signed up to the World Anti-Doping Agency programme have to keep the agency informed of their whereabouts twenty-four-seven as they could be tested at any time, at any point in or out of the season.