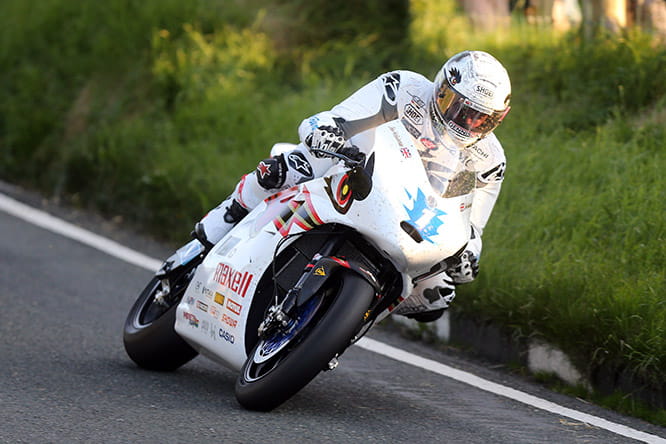 Seen by some as the future of motorcycle racing, the TT Zero ‘electric bike’ race continues to grow in stature and the 2016 race looks set to be the best yet as the likes of John McGuinness (pictured), Bruce Anstey, William Dunlop, Lee Johnson and Dean Harrison will all line up on Glencrutchery Road next Wednesday.

Last year saw a titanic battle between McGuinness and his Mugen team mate Anstey, with Lee Johnston pushing them to the line. In the end, it was TT legend McGuiness who took the win, slashing his lap record in process.

With 2016 being an unpredictable race, Bike Social takes a look at some of the key players and what their respective machines have to offer around the symbolic 37.7-mile road circuit.

There is little left to say about the TT legend that has not already been written. If the 44-year-old star takes another Zero victory in 2016, it will be a hat-trick for the Morecambe man in the silent category. Needing only four TT wins to surpass the late, great Joey Dunlop’s record of 26, the TT Zero race could well see the Morecambe Missile take another step closer.

With McGuinness also holding the lap record, this year could see the electric bikes surpass the 120mph barrier. The Mugen machine has an impressive R&D team behind it, heavily connected to Honda back in Japan.

Kiwi Bruce Anstey will partner McGuiness in the all-white Mugen outfit again as he searches for his first win in this innovative class. Anstey took to the podium last year, taking the team’s second one-two on the Island in as many years.

Anstey, who this year will ride the Honda RC213V-S in the Superbike and Senior TT’s will be on the lookout to make it 11 wins in his career on the famous road circuit and with a full winter testing the machine he could well climb the top step.

One man who might have something to say about the Mugen dominance is William Dunlop, who missed last year’s TT Zero race through injury. Competing on a Victory motorcycle, the company bring the all new RR machine to the Island, with William as the sole rider. The new machine has been built with the data collected from last year’s TT Zero and a version also competed at the famous Pikes Peak hillclimb in the USA, so it could well be a match for the Mugen.

Climbing on the rostrum last year with the Victory machine, Johnston switches to the Sarolea SP7 machine for 2016. Radically redesigning their entry since last year by reducing weight and enhancing the motor and aerodynamics, it could well be a podium contender with the flyweight Johnston on board and, if nothing else, it definitely wins our unofficial award as the prettiest bike of the entire TT.

The Yorkshire rider has been enjoying a brilliant TT so far, with podiums in yesterday’s Supersport and Superstock races and could well be a contender if the Belgian-built Sarolea goes as well as it looks.