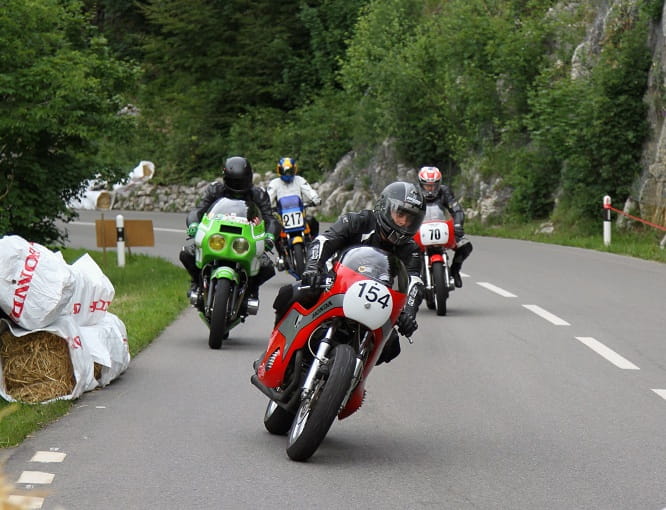 It’s the last few moments just before you wake up and face the world of texts and e-mails and Facebook comments, complaints from your boss that you are late delivering the project he failed to tell you about and just before you discover that the magician you booked for your kid’s birthday party has been arrested for dealing dope to children and that the dog has prised open the cupboard and has eaten a whole chocolate cake during the night and has thrown up all over the carpet and your wife’s car has a puncture - so she’s going to be late for work - and it’s all your fault. Welcome to the world in 2015.

But reality is still to come because, currently, your dream is taking you through fifty corners, in a thousand feet climb up a superb mountain road which twists and turns and snakes through a sweet smelling forest where there are no cops hiding behind trees with laser guns and no constraints on noise and spectators sit at the side of the road cheering and all the while, inside your Arai, you smile the smile of the supremely contented and happy motorcyclist who has constructed the ultimate fantasy ride which could never, ever, ever, ever – not in a million years of dreaming - be true.

Then the PA system booms out in French and you realise that this is not a dream but the reality of the most perfect motorcycling event in the world. This is Retro Moto St Cergue.

Retro Moto is a very odd event in many ways and vastly different from the innumerable classic motorcycling festivals which happen every weekend of the riding season in Europe. Its unique nature is just one reason for its appeal. Being in Switzerland is another.

St Cergue is a tiny village which sits up in the Vaud mountains, 22 miles from Geneva. It’s worth going to St Cergue just for the view overlooking Lac Leman on to the Haute-Savoie. However, although the village is picture post card pretty, the key attraction for motorcyclists is that St Cergue is at the end of the Route de Nyon which snakes up from the valley below. 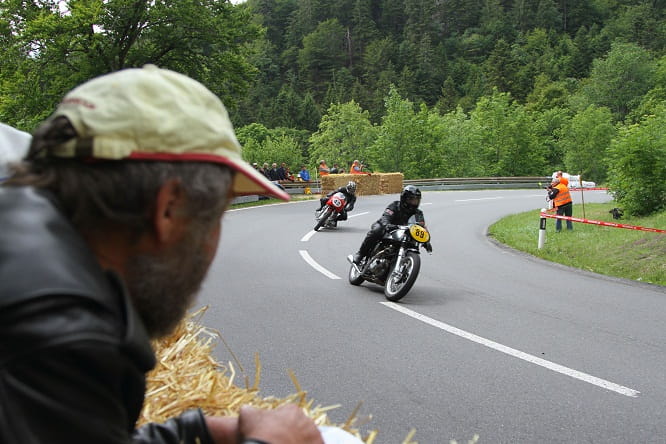 At one time, St Cergue was the finish of a full on racing hillclimb dating back to 1901 when 4 bikes and 28 cars battled their way up a 10km (6.21 miles) course. Races were held on and off for many years, until 1934 when this historic hill went into retirement. Then in 2001, over a glass of wine or ten, a group of bike enthusiasts had the idea of running a retrospective event using the same, spectacular, Nyon - St. Cergue road.

However, getting the event reinstated was a lot harder than merely ‘phoning the local Council and announcing that big time hill-climbing was about to return to St. Cergue. For a start, the Swiss have a very schizophrenic attitude towards racing.

As a nation, the Swiss are speed mad and have produced some super-star bike racers over the years. Unfortunately, following a horrendous accident at the 1953 Swiss Grand Prix in which three spectators were killed, the Swiss government banned all road racing - but through some bureaucratic quirk allowed hill-climbing to continue.

However, the plan was helped by a number of factors. First, the Retro Moto was not going to be a race - and has no timing element. Then, two children’s charities Terre des Hommes and Espoir Pour la Faim benefited tremendously from the income generated at the event. Finally, the area’s economy received a useful boost. Together, this was enough to bring the local community on board.

St Cergue is very welcoming to motorcyclists. The whole of their immaculate park is taken over by a huge, informal and very relaxed paddock and race bikes, joyously unsilenced, amble around the village. In these days of regulation and control it’s a wonderful experience. It’s only the presence of “Emergency Services”, together with their inevitable barriers and blue lights, which remind you that this is 2015. We currently live in a very strange world where the heavy hand of authority has to be exercised everywhere – even in the most gentle and tolerant of situations.

Technical Control has a pleasantly light touch as does riders’ briefing – but does still tax my limited ability in French. It’s an interesting challenge, translating words booming out irregularly from a PA whilst the bloke next to you happily blips the throttle on his Jim Redman replica Honda 4. Clearly, this is Miss Pilar’s revenge for me reading bike mags under my desk when I should have been concentrating on conjugating irregular verbs: take that, Melling!

With the introductions concluded, we’re off down Route de Nyon for the best mass start in motorcycling. Over 250 solos and sidecars, ranging from magnificent pre-Second World War race bikes to late classics from the 1990s, drop downhill in the grandest of grand parades and head for the start line nearly four and a half miles away. The atmosphere is quite simply joyous. There is no better way of describing the sheer good natured atmosphere of riding almost five miles of immaculate tarmac in the company of such an eclectic range of race and road bikes. If this isn’t heaven on earth, it’s a very good replica.

The start is about half way up the original course and out in the countryside. The Local Government tolerates this rural location, away from the business of the town of Nyon which was the location for the original hillclimb.

For the first run, there is an attempt at a starting order but it’s hot, and the riders are all good natured, so the officials abandon any semblance of order and we make our way out to the start line more or less as we please. As a nod to 2015 Health and Safety, riders start in groups of around four but it is light touch officialdom and this is what makes the event so special.

Either by design or accident the collecting box is just uphill from the start, located in a bus lay-by, and this is perfect for classic race bikes which can then bump start downhill. Although I don’t intend riding the hill at much more than 80% of racing speed, I am very aware that the 4.34 miles of pristine, Swiss tarmac are not to be taken too lightly. There are plenty of corners which can seriously bite you in the bottom, so as the bikes in front roll downhill and fire up their engines I start to ease my mind into race mode. Both petrol taps on: check. First gear engaged: check. Visor and helmet vents fully open: check. Helmet strap tight: check.  A last, and wholly unnecessary, tightening of the Velcro on my race gloves and we’re ready to go.

Now, there are just two rows of bikes before the marshal waves me away. Feel the clutch perfectly adjusted under my left hand. Tension the throttle with my right. No more than a couple of millimetres and the carburettor slides will open. The Seeley Suzuki feels wonderful – tight, fresh and eager to do battle. If I had a more anthropomorphic frame of mind, I could imagine it pawing the tarmac with its front wheel. 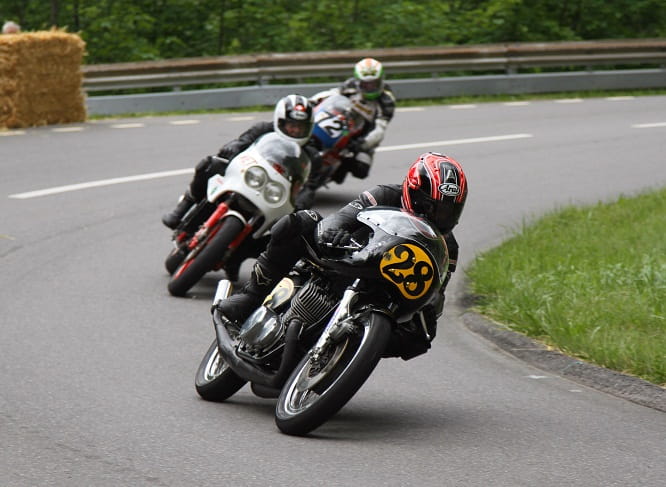 By now the pressures of the normal world of e-mails, and messages and visits to the Supermarket and all the pressures and concerns, great and small, of living in our intense, busy, organised, time-poor life have left me. The Seeley has no electronic aids – no sophisticated instrumentation. It will go as fast, or slow, as I bid it. If I make a mistake it will be my error and I will pay the price and, at St Cergue, it can be a big one. If I ride well, the bike will give me such an intense pleasure that man and machine will be melded into a harmony which will have even the most hardened pragmatist believing in the two wheeled horse.

I drop the clutch and the big, 500cc Suzuki two-stroke engine coughs once, twice and almost sneezes as two carburettors pour race fuel into the heart of the motor. Did I see the bike shake its head as it cleared its throat? Do I have a two-wheeled horse beneath me? A few yards later, both cylinders chime together in perfect unison. We’re ready to go – or almost. In this wonderful state of euphoria there lurks a danger – and a very real and practical one. The Seeley has an extremely restricted steering lock and so we have to describe a large arc using the full width of the road. A momentary flash of horror ricochets around my head. I could actually fall off here - within sight of the start. Ritual suicide would not be sufficient punishment to expunge the shame and embarrassment!

Now the Seeley is straight and pointing up the hill. I am at one with the bike and the multiverse. There is only one bit of intellectual thought left. The Swiss riders are rather bolder than me. They scream off up the hill oblivious to their stone cold and debris covered tyres. I need half a mile to clear off the dust and grass and put a bit of heat into the narrow classic race tyres before I really let fly with the Seeley.

Now I can settle down. The Seeley, with its Grand Prix heritage, was designed for courses like St Cergue. The road surface is superb. Only the Swiss would surface a minor road to this standard. The cambers run positive and negative and the corners tighten in a wonderfully irregular manner which is never seen on a modern road racing circuit.

There is unbridled joy – and yes I use that word again – in having such a superb motorcycle to ride in such perfect conditions. There can be nothing better in the whole, wide world of motorcycling.

With the Seeley flattering my riding, I catch riders regularly but this is not the time or place for aggression: circumspection and good manners are the dual passwords. Tolerance and patience are necessary because St Cergue is a demonstration, not a race, and many of the entrants are gentlemen riders with equally gentlemanly bikes. 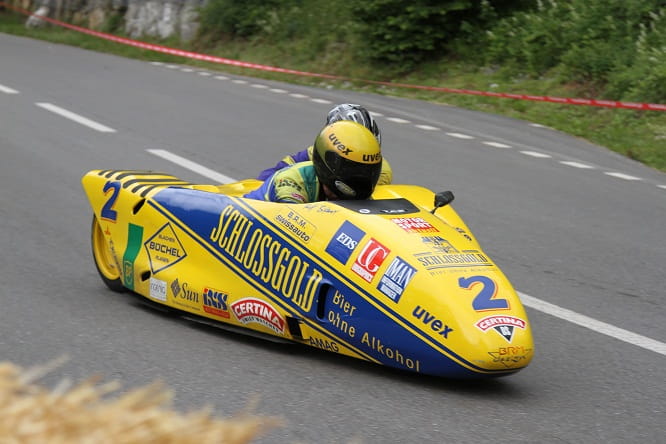 Patience is required because there are a lot of places where a mistake will be expensive. It’s a 1000 feet drop from St Cergue to the start and I don’t want to be exploring Swiss woodland, bouncing on my head, as the Seeley passes me on the way to the bottom.

It is difficult to articulate just how perfect is the range of corners at St Cergue. At one end are the fast, 90mph kinks through the forest. Tuck in tightly, let the motor pull hard and the Seeley tracks through the woodland as if it is on rails.

In between are tight right and left bends, like the slow parts of a conventional road racing circuit.

But for me, St Cergue is about the hairpin corners – 200 degrees or more, climbing and heavily cambered and supremely satisfying to get right – which, frustratingly, I only manage rarely.

Five and a half minutes later, the marshal is waving his flag and the “Arrivee” sign is here. I’m sweating and focussed but I wish that St Cergue could have continued for another 100 miles. If I never find anything better in the motorcycling world than St Cergue I will be completely satisfied.

My thanks to the enthusiastic organising committee of Retro Moto St Cergue and to P&O Ferries (www.poferries.com) for their consistently pro-motorcycle racing service. It’s always the most pleasant way to cross to France!

Being a public road you can just rock up and ride up and down the road all day, and all night for that matter, until you get fed up. There are no restrictions – other than falling down a large Alp and getting killed – and no fees to pay.